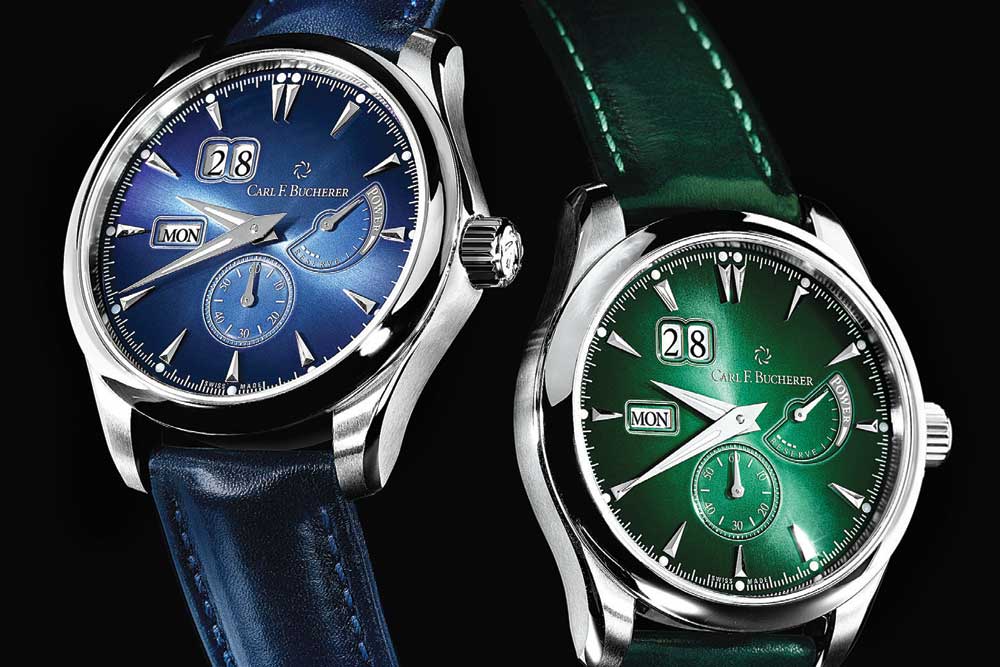 The Manero is virtuoso watchmaking craftsmanship in its most authentic form, a timeless classic of discreet yet powerful elegance. The Manero PowerReserve is an authentic manufacture product. Its centerpiece is the CFB A1011 caliber automatic movement. It belongs to the CFB A1000 movement family, entirely designed as well as developed by Carl F. Bucherer, and first presented in 2008. Its special features include the peripheral oscillating weight winding in both directions, allowing the movement a power reserve of at least 55 hours – or more than two full days – when fully wound. The remaining power reserve is shown in a semicircular display at 3 o’clock.

This analog power reserve display is kept in visual balance with the digital weekday display at 9 o’clock and complemented by a big date and small seconds. This design gives the Manero PowerReserve a unique and unmistakable look. It has so far been available in silver, rose gold and subtle black. Carl F. Bucherer is now launching two special colored dials – one in blue and one in green. Instead of offering a uniform color, the shade varies continuously, from a deep vivid shade on the edge to a brilliant light color in the center..

The results are two extraordinary watch models, one in mystical midnight blue, and the other in a shimmering pine green – both complemented by calfskin straps that harmonize with the soft tones on the edge of the dial. Each color variant of the Manero PowerReserve is limited to 188 models worldwide. The number was chosen for a special reason as the brand was launched in 1888.

Last year, Carl F. Bucherer introduced the CFB A2000 manufacture movement. The A2000 retains the A1000 caliber’s signature winding mechanism but is enhanced from a 3hz to a 4Hz beat rate “for increased precision and a newly free-sprung balance for increased resistance to shock-induced timing deviation.” The A2000 has the COSC Swiss Chronometer certification to attest to its high-level performance.