‘Writing has a Religious Character’

Aatish Taseer believes writing is an ‘intense form of concentration’, and when immersed in it, he often feels he can live without friends, family or lovers 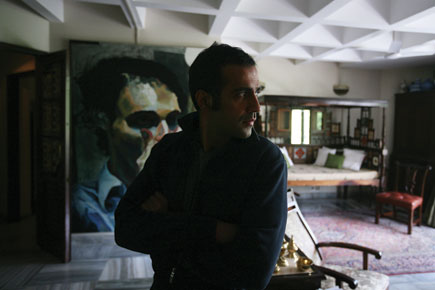 When immersed in writing, Aatish Taseer often feels he can live without friends, family or lovers


Above all else, economy—that rare ability in fiction to use less to say more—figures high in the order of things for Aatish Taseer. Nurtured on the limpid prose of Guy de Maupassant, W Somerset Maugham and, of course, his intellectual mentor VS Naipaul, the 31-year-old author of four books finds a special satisfaction in taut narrative, expressed in a direct, truthful way. For the same reason, he respects the prose stylist qualities of Truman Capote, but can never bring himself to write like him.

“The aesthetic of clean and simple language appeals to me, of believing always that there’s something suspicious and ugly about the ornate, and that the simpler you are, the more effective and powerful you can be. I remember Naipaul telling me that he always viewed style as a refinement of thought, not of language, and I took a lot from that,” says Taseer, whose new book of fiction, Noon, can be interpreted as a companion piece to his previous books, Stranger to History and The Temple-Goers. “There’s nothing more beautiful than reading the body of work of a writer and seeing not only his growth, but also a sense of continuation, that line running through his works,” he muses, calling to mind Naipaul’s pertinent words of his being “a sum of my books”.

Taseer, however, sweeps aside any suggestion of Noon being autobiographical. “Autobiography is something of a cast, like a frame, but the books are not about me,” he says.

Since his debut in fiction, Taseer’s writing has been concerned with the more personal issues of identity, absence and religion, although he is apolitical and an atheist who values a writer’s “moral sense” above all else. “This doesn’t mean that a writer must conform to any morality, religious or social. The point is, if you start to lie or do things for the wrong reasons, you pay a price in the writing. You have to work out of some moral impulse within you. You can’t be like, ‘Aaj kal India ki underbelly ke bare mein kitaabein chal rahi hain toh hum woh likhte hain (books on India’s underbelly are selling, so I might as well write on that). There has to be a commitment to the truth.”

Working without a break, as Taseer did over months for Noon, with the added pressure of dealing with a personal loss (the assassination of his Pakistani father, the Governor of Punjab, Salman Taseer, in January 2011), he is inclined to believe that writers live “small”.

“If writers live too big, they impinge on their interior life,” he prevaricates, advancing an explanation, “That experience of loss left me very little time for myself. I was beginning to work on new things when my father was killed. I had this constant desire of just being someplace quiet on my own and regaining my sense.” In London recently, for the first time in six months, Taseer says he felt well. “It was like I woke up after a terrible sickness and was delighted to walk around… jaise beemar ko bewajah qaraar aa jaye,” he says, quoting his grandfather Faiz Ahmed Faiz’s couplet.

About converting experience and emotions into fiction, Taseer says, “I use a very personal prism to explore what I consider my material and, of course, there are themes that stay with you.” The exercise of writing, he explains, is an intense form of concentration. “I can’t write when I am doing this,” he smiles, referring to the itinerant nature of book tours. In his collection of essays titled Dreaming and Scheming, Hanif Kureishi had observed: ‘A good deal of writing is finding a method that will make the writing happen.’ Taseer has no conventional or pedantic method to achieve that task. “Certainly, when I am preparing to write, I shut myself from the outside world. I go to bed at a certain time and I am up very early and am usually at my computer by 5 am. That peacefulness is necessary. That concentration eventually leads to something.”

Any story, first and foremost, originates from the consciousness, says Taseer. “A writer picks up the pen only when, as (Saadat Hasan) Manto said, ‘Zameer par chot lagti hai’ (there’s pain in my consciousness),” quips Taseer, whose very first published work was an Urdu-to-English translation of Manto’s short stories.

Having written fiction and non-fiction by turns, Taseer’s understanding of both genres allows him to play around and experiment with style, but he makes a self-defined distinction between the two. “In the early life of a fiction writer, there’s a fair amount of unprocessed experience. You are discovering a lot within you. In that sense, fiction is an internal concentration. With non-fiction, it’s different—you know the source of your material, you seek it out and probe it. You do what you have to, and that makes it a much more deliberate process.”

At the heart of writing of any kind is primarily an element of enquiry. “Writing can have mysterious powers. It’s one of the most profound things human beings have been able to do. For me, especially, it has a religious character. Sometimes, I feel that I don’t need friends, family and lovers and that writing is enough. But that’s a mistake because in the end, you need interactions. You have a life to live,” he observes.

Taseer is struck by how the process of writing can manifest itself in “mysterious” ways. “Firstly, there are people who inspire a story and they stay with you for a long time. You live with them when you are trying to write fiction. Very slowly, after the experience of them remaining with you in this extended way, things start to show themselves as scenes and appear in a fuller way. That’s how stories are born.”

His love affair with words, the “first child-like excitement” for language, began as a kid. In one of those impactful moments that have stayed with him like the people who inspire his plots, Taseer recalls his mother, journalist Tavleen Singh, reading out Samuel Taylor Coleridge’s poem Kubla Khan to him. “But you can’t call it an ‘influence’ in a way that we are talking about now as a writer. As a kid, I read a lot, from fairytales to Roald Dahls, but it was like reading in a blind kind of way,” he grins.

His introduction to Naipaul, which would assume the form of a lifelong influence, was more dramatic. “I remember there’s a moment in India: A Wounded Civilization where there are some people in the room, and this typically ethnic woman, full of pretentions, says that the poor of Bombay are more beautiful than anyone else. Naipaul writes, ‘And now she was beginning to lie.’ Later, he says, it will take generations to rehabilitate them. That’s a beautiful Naipaulian moment. This way, he introduces the window of hope in an otherwise scathing book, and that’s a rare quality.” Taseer was only 17 when he attained this ‘literary enlightenment’, but it would be wrong to say that his work is inspired entirely by his mentor despite, one must add, a thematic resemblance that Stranger to History bears to Naipaul’s Among the Believers.

His worldview is equally informed by the Russian and French masters, and particularly Maupassant, whose A Woman’s Life is by far his favourite. Yet, there’s something about writers that doesn’t appeal to him, some terrible “ordinariness” in their daily lives that prevents him from fulfilling the autograph-seeking, fan-like fantasies that characterise young hopefuls. “I have spent a lifetime reading dead authors. People ask me, ‘Who would you have liked to meet?’ I answer out of politeness, but actually I don’t care and have no interest in meeting any of the authors because the experience of reading an incredible book doesn’t arouse a corresponding desire in me to meet the writer. Almost never.”

To his own fans, he’s courteous, but maintains a distance. He prevents them from getting too close. He believes a book is ideally a relationship between the material and the reader, and that the writer and reader don’t necessarily have anything to say to each other. “I like it very much when I get to know that my books are finding readers, but I am not a very accommodating person who may want to hear what they have to say.”