The first female war photographer shot some famous pictures. This book features a few that are not so well known. 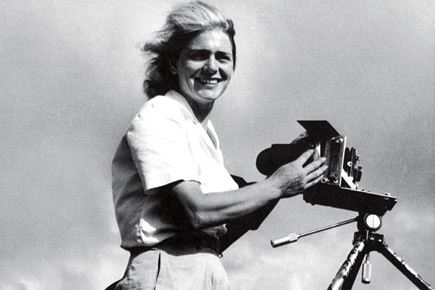 The first female war photographer shot some famous pictures. This book features a few that are not so well known.


A photojournalist from Life magazine arrived in India in 1946. The world’s first female war correspondent, Margaret Bourke-White had been entrusted with a cataclysmic assignment: to capture the fall of the British empire for this iconic all-photo magazine. She started by seeking Gandhi. The day they met, both timing and light conspired against her. It was Gandhi’s day of silence. He was sitting in a dark hut. As she entered, he ignored her, keeping his gaze fixed on papers in his lap and spinning the charkha. The sun shone on her lens. Then, her camera equipment, sabotaged by the heat and dust, didn’t fire on time—twice.

When the third and last pinbulb flash popped triumphantly, it created the image of the Mahatma that’s imprinted on every Indian’s mind. Of him seated bare-chested on the floor, feeding a fine cotton thread into the charkha with his bowed head lit by a natural halo. ‘That day… Margaret composed a secular saint, humble, meditative and accompanied by his symbolic spinning wheel,’ says Vicki Goldberg, biographer of Margaret Bourke-White. Over the next two years, this photojournalist would document India’s birth amidst violence. When publisher and collector Pramod Kapoor saw Bourke’s portfolio at the Getty archives, he decided to collate her seen and unseen work in Witness to Life & Freedom: Margaret Bourke-White in India and Pakistan.

Kapoor conflates the photo collection with a poetic foreword by Gopalkrishna Gandhi and a sharply observed essay by Vicki Goldberg. Open the book and you will be disturbed by images, of corpses, that weren’t published until now. A stirring image is one of a tall Sikh carrying a woman on his shoulders across the border. There’s a rare portrait of a smiling Jinnah. And there are unforgettables like a sanyasi (ascetic) descending from a Tata plane; the airhostess says, “He conquered his air-sickness well.” But captivating captions are missing. With pushed-between quotes, Kapoor shirks his authorial role. The collection suffers from clumsy and lazy curation. One banal photo is described with such absurd exactitude as: ‘Woman from a royal family.’ Why was it included?

Such gaucheness will grate, but focus on the B&W images by the photojournalist Gandhiji affectionately called “my torturer”. In two momentous years, she gave the world its greatest glimpses of the Mahatma—as he spun a charkha, as he walked leaning on his grand niece-in-law Abha and granddaughter Sita. Moments before the shots rang out at Birla House on 30 January 1948, Bourke-White was with Gandhi. She followed the cortege clawing her way onto a truck to get the last image of the Mahatma. Read this book, but for verité, hunt for Bourke-White’s own book, Halfway to Freedom.