Where the Gods Come to Die

Byatt’s retelling of Ragnarok, with its references to environmental destruction and cyclical violence, reminds us that a great myth is always relevant 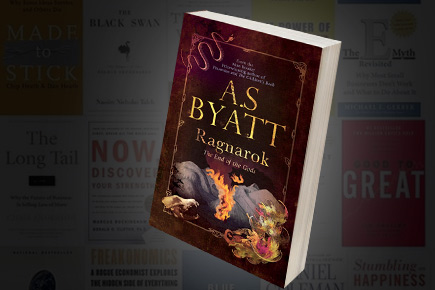 Byatt’s retelling of Ragnarok, with its references to environmental destruction and cyclical violence, reminds us that a great myth is always relevant


As Byatt often uses myth as a narrative thread in her work. Although many of us were stunned by her mastery of voice and plot in the Booker-winning Possession (1990), my favourite Byatt book has always been The Djinn in the Nightingale’s Eye (1994), where she creates a series of fairy tales and ends the collection with a novella about a middle-aged academic who studies mythology and a djinn who fall in love with each other. Like Hans Christian Anderson, who also created fairy tales, Byatt manages to bury a dark heart of pain and danger in her stories, a reminder of what we lose for all that we gain with magic.

In her new book, The End of the Gods, that dark heart is front and centre.

The Norse idea of Ragnarok, the death of the gods and end of the world, is, in itself, deeply disturbing. While its cataclysmic violence and complete destruction is usually safely contained within the category of myth, Byatt brings that myth to life in a novel not through allegory or evocation, but through a powerful, inflected reiteration.

What I enjoyed most about The End of the Gods is that the myth remains a myth even as it is located within the more accessible form of the novel. In a note at the end of the book, Byatt points to a critical feature of myth that makes it distinct from fairy tales and other fiction: that gods and demons and others in myths do not have personalities and characters, they have attributes.

In The End of the Gods, Byatt, with enormous felicity, uses the possibilities of both genres that are available to her—the psychological depth and unique personality of characters in a novel, and a single, dominant quality, such as jealousy or beauty, of actors in the myth—as she moves between the world of the gods and that of human beings.

The ghastly destruction of Ragnarok is slightly framed within the story of a ‘thin child’ who moves to the country with her mother to escape bombings during World War II and is given a book of mythology to read.

Within that, Byatt retells the myth as a myth, reminding us of the cosmic tree, the serpent that circles middle earth where humans live, the wolves that howl at the edges of the world and wait for their time to come, the great hall where warriors who die in battle are resurrected only to fight and die again, the limited powers of the gods, the shattering consequences of Loki’s whimsy.

The thin child’s world in the country is idyllic—she walks through meadows and learns the names of flowers and plants and waits for them to return with the recurring seasons. Her young sense of the renewal and return that she sees all around her in nature is coloured by the absence of her father, who is away fighting the War and for whose safe return the family raises a glass of cider every Christmas.

The same War impinges on her imagination and allows the amorphous fears of childhood to become crystallised into the spectre of Germans under her bed. Her reading of Norse myths gives her a way to understand the Christian creed, each being as distant and unlikely as the other. She does not bend her mind to try and comprehend the ways of the gods, whether Norse or Christian; they do what they do and she does what she does, and either way, the world as she knows it continues to turn. The perplexed innocence of the child is a marvellous counterpoint to both the real War and the mythical destruction that will be unleashed when the gods destroy themselves.

Byatt says in her note that when she was asked to write a myth (presumably by a publishing house), she chose Ragnarok because ‘we are a species of animal which is bringing about the end of the world we were born into… not out of evil or malice… but because of a lopsided mixture of extraordinary cleverness, extraordinary greed… and a biologically-built-in-short-sightedness’. Even without this parsing of her own work, Byatt’s intentions are brilliantly clear—from environmental destruction to climate change to a violence that simply feeds on itself, her retelling of Ragnarok vividly brings all of these to the reader’s mind.
Byatt’s book reminds us that a great myth, no matter which culture it comes from or what its specific images are, is always relevant.

Arshia Sattar
Arshia Sattar is an author and translator. Her most recent translation is Tales from the Kathasaritsagara