Prabhakaran was terrified of peace. He lived off terror. But how did the LTTE fund its campaigns of sustained violence? This riveting account explains how 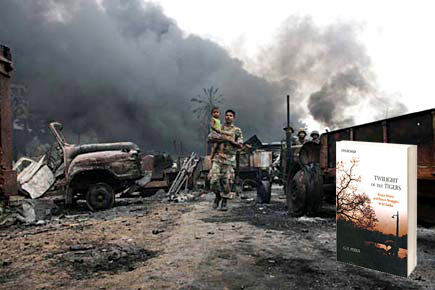 How did the LTTE fund its campaigns of sustained violence?


How did the LTTE fund its campaigns of sustained violence?

The evolution of the LTTE from the status of a small band of political militants with criminal tendencies to that of one of the most powerful terrorist outfits the world has ever seen is, indeed, the substance of a drama of almost unmatchable organisational skill, tactical foresight, ruthlessness and brutality enacted by its leader, Velupillai Prabhakaran. The victims of his wrath, vengeance and the single-minded pursuit of power include those who have figured at the highest leadership levels in Sri Lanka and India. In annihilating all opposition, he has hardly ever displayed any leniency towards leaders of the Tamil community or to other Tamil groups with political objectives similar to his own, or, for that matter, towards his own comrades in arms. It is because there is no way he could now abandon the path of violence and yet hope to survive that Prabhakaran, as Kumaratunga said, is so obviously terrified of peace.

Self-preservation is, of course, not the only incentive for the leadership of the LITE to persist with its campaign of war, violence and terror. Its notoriety as a feared terrorist organisation, and the loyalty and gratitude of segments of the Tamil diaspora for its apariijito against seemingly insurmountable odds have, over the years, enabled it to build up a massive empire of business and commerce with a global spread for which the Edam war provides the motive force. Snippets of information available now on the LTTE’s financial and business transactions leave little room to doubt that its war must continue for its business and commerce to flourish. Since the strength of this link has often been overlooked in the advocacy of negotiating with the LTTE, it deserves brief recapitulation here.

It has been well known for some years that the military campaign, the acts of terrorism, and the political propaganda of the LTTE are being sustained by finances derived from a variety of activities, some legally permitted, and others operated in violation of the law. These include fund-raising from donors (individuals, private organisations, and on occasions official agencies); extortion from its captive/pliant Tamil communities in Sri Lanka and abroad; smuggling of people, narcotics, weapons—intelligence agencies believe that the LTTE has been a supplier of arms to small insurgent groups in India; forging of travel documents, currency, and credit cards; shipping and transport; wholesale and retail trade; stock market operations; and a variety of other financial transactions. Some of the related operations are carried out under the direct control of the LTTE and its front organisations of which, it is believed, there are several hundreds, mostly in North America, Europe, and Australia. In other instances, it appears, groups consisting largely of Sri Lankan Tamils living abroad engage in these activities and channel some of their profits to the LTTE.

Private donations and extortion—quite often, there is only a hazy distinction between these two forms of fund-raising—probably constitute a large (if not the largest) and the most persistent among the LTTE’s sources of income. After the eviction of the LTTE from Jaffna peninsula in 1995, the bulk of the income so derived has originated in expatriate Sri Lankan Tamil communities in western countries. A widely quoted study published in 1995 by the Mackenzie Institute, Toronto, highlighted the ‘extortion element’ associated with LTTE fund-raising among expatriate Tamil communities in western countries. The specific references made in this study to extortion rackets operated by the LTTE in Germany, France, the United Kingdom, and Canada suggest that in these four countries alone the annual extractions through intimidation of its compatriots could even be as high as $ 10 million. According to a 1999 estimate attributed to a source in the Sri Lankan embassy in Canada, the total amount of ‘refugee funding’ of the LTTE worldwide is about US$ 2 million a month, of which a large share (the equivalent of US$ 730,000 per month) appears to be derived from the Tamils living in Canada. The available estimates of monthly collections from other countries are (in US dollar equivalents): Switzerland, 650,000; United Kingdom, 385,000; and Germany, 200,000. Yet another recent estimate has placed the LTTE collection from the Tamil diaspora worldwide at £1.25 million per month…

…Drug trafficking has constituted one of the most important avenues of LTTE fund-raising. There is an abundance of evidence of individuals and groups with links to the LTTE engaging in almost all forms of transactions in narcotics other than the growing of raw materials (cannabis and opium poppy) and processing. To summarise the related findings, the LTTE cadres are known to have frequently participated in the bulk delivery of drugs from producing areas through transit points to wholesalers in consuming countries; conveying consignments of refined heroin from producers in Asian countries to intermediary destinations in the Middle East, North Africa, South Africa, and the western countries; operating drug distribution networks as ‘dealers’ in Europe and Canada; working as ‘couriers’ between dealers and distributors; and even ‘peddling’ of drugs in the retail market. More recently, other sets of evidence (somewhat less conclusive) have come to light which suggest that, since the early 1990s, the LTTE focus on drug transactions has shifted from the European market (in which it was active in the mid-1980s) to bulk distribution of heroin from the source areas of the ‘Golden Triangle’ in continental South-East Asia which, according to recent reports, has the potential of generating massive income.

Among the other clandestine activities of people with LTTE links reported from Europe and Canada are forgery of credit cards and travel documents, and the counterfeiting of currency. The authorities believe that, since these are carried out in the guise of supporting the ‘liberation struggle’, there is an attitude of tolerance or indifference towards such activities on the part of law-abiding Tamils residing in these countries. This, evidently, makes detection and law enforcement extremely difficult.

These illegal transactions have enabled the LTTE to invest in a wide variety of legitimate enterprises in trade and commerce, ranging from retail shops and restaurants, transport and cargo-handling services, to investment in the stock market and in real estate in many parts of the world. Some of these operations are believed to provide cover for clandestine transactions such as those in drugs and arms. Likewise, they facilitate operations in money laundering. The income thus generated is large enough to finance propaganda, subvert law enforcement, and bribe politicians and others at decision-making levels. The control mechanisms of these massive interlocking networks of legal and illegal operations are being furnished by the leadership of the LTTE, sometimes directly, but more often through front organisations. What allegedly enables the leadership to command loyalty and obedience from thousands of activists is their collective commitment to the ‘liberation effort’. In the absence of such an effort, it is likely that the entire network will disintegrate.