A photographic tribute to Ustad and friends 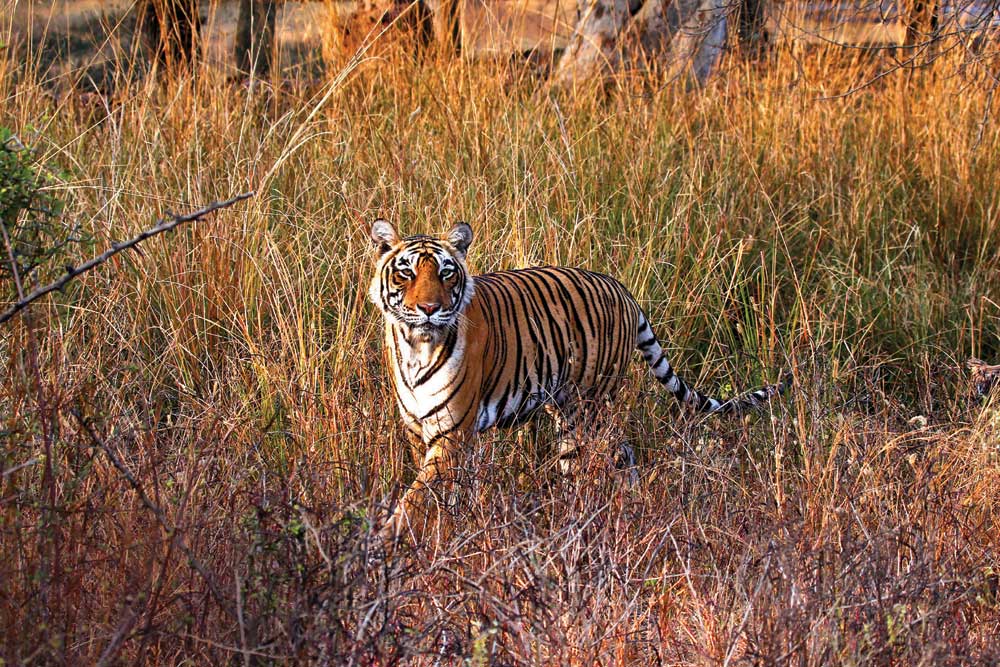 IF THERE’S ONE thing the wildlife of this country requires most, it is friends in high places. It was, for example only thanks to late Prime Minister Indira Gandhi that Project Tiger got off the ground and wildlife protection began to be taken seriously. The author of Silent Sentinels of Ranthambhore, a coffee table extravaganza, Bina Kak was Minister for Tourism, Arts and Culture in the government of Rajasthan when the Congress was in power and Ashok Gehlot was the state’s Chief Minister. He gave her the additional responsibility of the department of environment and forests. Happily Kak soon fell under the spell of Ranthambhore’s magnificent tigers, and this book is her photographic tribute to its ‘sentinels.’

It’s more a photographic album than a literary work. Kak writes briefly of her interactions with the various famous tiger families and individuals (some like Machli and Ustad who have become household names) that prowled around the park; each chapter is devoted to one tiger and profusely illustrated with photographs. There are some lovely and lively portraits, and ‘family pictures’, though fewer action shots and few of those gilded early-morning and late evening shots that, photographers usually hanker after. The writing is staid and does not really get you emotionally involved in the lives of the tigers—it’s more of a documentary than anything else.

Also, major controversial issues are often skated over. Kak deals with them more generically than specifically. Tourism for instance has always been a double-edged sword as far as wildlife conservation is concerned, especially in an undisciplined country like India. We’ve all been appalled by dreadful pictures of tigers being ‘gheraoed’ by swarms of Gypsies, looking hunted and unhappy, and know what hoteliers have done to the areas abutting major national parks. It would have been useful to know what the Rajasthan government’s policy was, and specifically what Ranthambhore’s rules allow (for instance: is there a quota for the number of vehicles allowed near a tiger at any one time?). Nor is there any comment on the controversy surrounding the translocation of Ranthambhore’s tigers to Sariska wherein all the three tigers in the first transfer, turned out to be half-siblings, and that Sariska itself was not quite ready for their arrival (conditions like translocation of villages had not been done).

Ustad, one of the Ranthambhore’s most notorious tigers, got into deep trouble after being accused of killing and eating at least four people in the national park, and was secretly moved to Udaipur zoo. Kak had defended Ustad in press reports, maintaining that the mighty fellow had never threatened people (she has a photograph of him walking nonchalantly past three village women) and that the only reason why he might have attacked people was that they came too close to him. Yet, none of this is mentioned in the book and it is really issues such as these that would have made the book come alive and been more useful to the lay reader. She also leaves out the happy fact that (according to press reports) she was the first person to give the Ranthambhore tigers decent names other than the dry desiccated monikers they were accorded—T23, T24, T25, etcetera. You certainly don’t want to read about an entity called T24, but about a tiger called Ustad—of course you do.

This book would have been quite wonderful if it had been more personalised, forceful and evocative and less generic and bland. But hopefully it will inspire more people in power to go out into the field and have a look at the creatures that really are in control of our destiny—in spite of what they might think.