Amit Chaudhuri on the death of the author-editor relationship, the boredom of being a novelist, and writing on his feet, literally 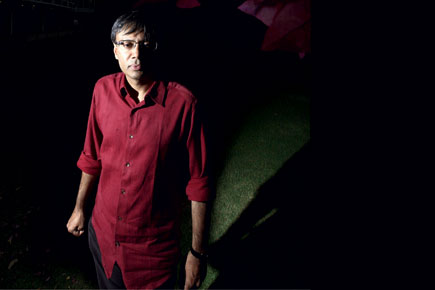 Amit Chaudhuri on the death of the author-editor relationship, the boredom of being a novelist, and writing on his feet, literally


Amit Chaudhuri, who began his writing career with a slew of literary prizes and shining reviews in the western press for his slim and elegant novels, has in the past decade written a book of scholarly criticism on DH Lawrence, two books of essays, one volume of poetry, a collection of short stories and one novel. His last is a book of essays on that everlasting Bengali obsession, Tagore. His next is a non-fiction book on Calcutta, set in the period 2009-2011—those two charged, hope-filled years in the run-up to the fall of West Bengal’s CPM government after an unbroken 34-year reign. Chaudhuri’s versatility is startling; the writing discipline that makes this possible must be no less so. Yet he, so polite and thoughtful otherwise, is impatient at such talk; “What is this ‘discipline,?” he interrupts. He recovers his air of calm good humour almost instantaneously, though, and tells us, in considered sentences with literary references, about the rhythm of his writing days enlivened by Hindustani classical music riyaaz sessions.

Q When do you write?

A I am not much of a morning person. I wake up around 9 am and then I do my riyaaz at about 10 am. I finish at 11 am and write before beginning another session of riyaaz at, say, 12.30 pm for about an hour. After lunch, I settle down to write seriously and work till 6 pm. This I do for two days. On the third day, I take a break from riyaaz and write the whole day. This is my rhythm of work. I don’t take a break from writing unless I am promoting a book or travelling. Then I don’t write at all.

Q How do you write?

A Longhand, on student note books from Oxford [University]. You get them in the bookstores there. I used these in my student years, though I rarely took academic notes. It is the comfort of habit; I have an idea of how many words fit the page. I wrote my first two novels [A Strange and Sublime Address and Afternoon Raag] on account registers, the lined, long ones with neat columns you get in India.

People tell me you get an immediate word count on the computer, but I type with one finger. It doesn’t seem to me worth the time getting used to typing.

A I don’t have an assigned writing space though I do have what Virginia Woolf called ‘a room of one’s own’, especially when my wife’s at work and my daughter in her school. I have a problem with complete silence and solitude, yet there are times when the whirl of activity in the world around gets distracting. I often write standing up. Walking or pacing up and down helps the flow of ideas, I find.

Q Do you still delight in the sentence? Or does the labour of putting a work together diminish those joys?

A As a writer, it is excitement I seek, and pleasure in the sentence is part of that thrill. It is an up and down process—the pleasure of the perfect sentence is followed by the realisation that the next sentence still needs to be written.

A poet can afford to pursue excitement in language. I saw this when I wrote my collection, St Cyril Road and Other Poems, though the poems came very sporadically.

In his poem The Novelist, WH Auden wrote of the boredom the novelist must endure […but he/Must struggle out of his boyish gift and learn/How to be plain and awkward…he must become the whole of boredom]. I know this, the he-said, she-said aspect of the novel. What Virginia Woolf called ‘this appalling narrative business of the realist: getting on from lunch to dinner’.

Then there is keeping track of what Vladimir Nabokov called the ‘inner co-ordinates’ of the novel. If I give a character a limp in chapter five, I have to remember this the next time the character surfaces.

These are the occupational hazards of writing fiction. For me, as a result, the sort of writing in which setting and background are more important than the figures in the foreground is more satisfying.

Q When did you find your writing voice?

A Soon after I began my first novel, A Strange and Sublime Address. I started writing it when I was 24; I had just joined Oxford for my PhD then. After my first term there, I came home for the break and fell ill with hepatitis. I couldn’t go back to university till I recovered. I wrote plenty during that time, and one chapter, Chapter Seven, about Chhotomama’s bath, was especially satisfying. I knew then that this is the sort of writer I want to be. That chapter was published in The London Review of Books, so there was confirmation too. It also launched my career. Literary agents sought me out after the chapter was published.

Q So you didn’t really face the struggle of the unpublished writer?

A No, but there was a wait of three years. My agent submitted my manuscript to Faber and Heinemann. There was an editor at Heinemann—which eventually published me—who didn’t like the book. Faber took a long time getting back. Eventually, I got a two-book deal. I feel now that I faced that three-year-delay with far greater fortitude than I would today.

Q You have a PhD from Oxford and you’ve held impressive fellowships. How do you fare at academic writing?

A I have never been able to write in the academic style. Even my PhD thesis on DH Lawrence was idiosyncratically written. That I finished it is thanks to my wife. I completed two novels while doing my doctorate and neglected my studies guiltlessly. I practised Hindustani classical music with puritanical zeal. I contemplated giving up my studies before my wife, whom I met in university, reminded me of the virtues of being a good Bengali boy.

In 2003, Oxford University Press published my thesis, DH Lawrence and Difference, and I was heartened to find that the hard-to-please British critic Terry Eagleton praised it.

Q How do you react to deadlines?

A Badly, but I see their use. You need to get the work done. Many times, I have had to seek extensions, but when I accept a deadline from a publisher, I do feel the obligation to meet it.

Q What about writing blocks?

A I can’t afford them, to be truthful. I have been a published writer since 1991 and I have constant deadlines. I work through it. As I said, I don’t take time off from writing.

I choked in the late 1990s when the publishing industry suddenly became glamorous. Some writers thrive on that; they wake up in the morning and wait for journalists to call. And then there are the parties in the evenings. I found that life is not for me. Being too close to schmoozing distracts me from imaginative activity.

Those were the days of the outrageous advance [payment], when the advance became part of the identity of the writer. For a while, I saw the advance as a marker of the commitment the publisher was making to the writer. But many of these awesome advances were not borne out by the sales of the books. Also, this was before the big downturn, so publishing houses could afford to be extravagant.

That was the time I decided to move back to India. Also, I did not want to become the sort of professionalised novelist that kind of publishing was producing, writing books the way cows produce milk. That is what Ian McEwan and Martin Amis did, and it was the death of them as writers.

Q Does the writing process stress you?

A The pursuit of perfection used to stress me out earlier. Now, I am much more open to exploring, to finding out pieces as I go along.

Q How many drafts do you write before you send a book off?

A I am a constant reviser, I read what I have written all the time and edit it. So the first draft itself takes a long time. Then, of course, I give the whole thing a read and make changes. But there is no fixed number or average number of revisions. I send a book off when I think it ready. It usually takes me near about three years to complete it. And then, of course, I hate it.

Q Describe your relationship with your editor. How do you react to the editor’s suggestions?

A The age of the fabled author-editor relationship you are thinking of is over. The nature of publishing has changed; it is much more corporatised now. People move jobs in publishing like they do in other corporate sectors. I have not had the fortune of having the same editor for long.

I have never had a serious difference of opinion with any of my editors. I don’t know what I would do if that happens. I think ‘line edits’ are important; sometimes gifted copy editors can make a big difference.

Q How do you react to bad reviews?

A I think I’m uninterested in negative reviewing in India for a few reasons, although it can be an irritant if I come across something that’s gratuitously critical or—this can often be the case—oddly moralistic. The bad review is almost unfailingly badly written, partly because Anglophone reviewing in India can be done by almost anyone, without their having to prove their credentials in any way, and [partly because] it emerges largely out of a culture of negativity, the flip side of the culture of mindless hero worship, which is also the other side of this moralistic world.

And still, despite this, perceptive and generous reviews of my work do appear in India, and I remember them when they do, and I’m very grateful and honoured they exist.

But it’s taken me a long, long time to not care about the bad review. In fact, it has been a couple of years at best.