The Unending Nostalgia of Punjabiyat

Was there a shared Punjabi identity that united the region’s Muslims and Sikhs before the advent of British rule? Gandhi places too much faith in such a notion 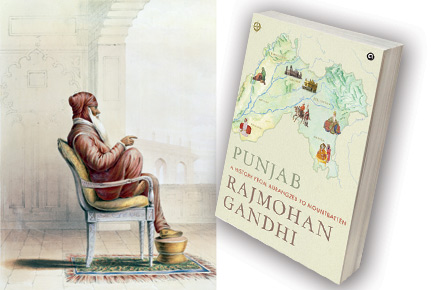 Was there a shared Punjabi identity that united the region’s Muslims and Sikhs before the advent of British rule? Gandhi places too much faith in such a notion


No history of Punjab has been written in 125 years, as Rajmohan Gandhi observes in his introduction, even though much has been written about subjects such as the Partition or Sikhs. The task then that Gandhi takes upon himself is immense and necessary—a history of a region that in this study ‘signifies the subcontinent’s Punjabi-speaking region as a whole, or what old-timers remember as undivided or ‘British’ Punjab’.

His attempted definition of the region he seeks to describe already indicates a problem. The Himachalis and Haryanvis of today would be perplexed to be counted as Punjabi speaking, but their forebears were certainly part of ‘British Punjab’. Gandhi is dealing with the Subcontinent’s Punjabi-speaking region, the truncated Indian Punjab and the much larger Pakistani Punjab. But once this becomes clear, the premise of the book itself comes into question. Why begin with Aurangzeb and end with Mountbatten?

With Aurangzeb’s death, central authority dissipated in the Punjab. Strictly speaking, if the book was interested in Punjab freed of external control, it should have ended with the British victory. If it was interested in the division of Punjab, there was no reason to begin with Aurangzeb. The advent of Islam or the development of Punjabi as a language would have been a far more appropriate choice.

This unclear definition of Punjab and the uncertain logic of the period it covers may seem a drawback, but the book needs to be read not as a comprehensive history of Punjab—of which it does a poor job—but as an answer to the question that Gandhi poses at the beginning: why was Punjab’s Muslim majority unable to fill the power vacuum when, post Aurangzeb, the Mughal Empire retreated from the province?

However, Gandhi himself seems to be unaware of the task he is trying to address. In trying to be comprehensive while attempting an answer to the question he poses, he manages to do neither. I will not persist here with the book’s failings as a history of the Punjab. Rather, I will trace Gandhi’s attempt to answer his question.

In the immediate aftermath of the Mughal Empire’s decline, Gandhi notes that ‘Sikhs across Punjab had found a common purpose. They felt they were a single people. On the other hand, Muslims across Punjab saw themselves as belonging to a clan, tribe, locality or landlord, not to one another.’ This, of course, is not an answer. What was different about Sikhism as compared to Islam in Punjab that it could erase hierarchy?

This common purpose eventually led to Ranjit Singh’s kingdom, the first time in 800 years that Punjab was ruled by one of its own. This also meant, Gandhi writes, that ‘for the first time in centuries, Punjab’s Muslims were thus being governed by a non-Muslim establishment led by Jat Sikhs… A French Scholar of Punjab… goes so far as to add that the people experienced a ‘feeling of belonging’ and ‘a Punjabi ethos and culture’ was created. The kingdom was not free of religious tension. Bans on slaughter of cows and restrictions on public calls for the Islamic prayer were imposed in many places. However, such bans could not be enforced in overwhelmingly Muslim localities.’ When a Barelvi ideologue from the United Provinces, Sayyid Ahmed, issued a call for jihad against the Sikh kingdom, many Pashtuns responded, but ‘it has been claimed that ‘not a single Muslim chief of standing’ in Punjab supported the jihad.’

Yet, when Gandhi transitions to British India, he asserts that ‘two factors blessed the start of British Punjab. One, the province’s Muslim majority felt glad at the end of Sikh rule. Ranjit Singh was not anti-Muslim, yet his Khalsa sarkar had restricted Muslim practices. Indeed, according to Ian Talbot, ‘most of the leading Muslim families of West Punjab (had) supported the British during the Sikh wars’.’

Gandhi makes no attempt to reconcile the contradictions between his own claims. Was there indeed an incipient Punjabi identity that ensured that Punjabi Muslims did not join the jihad against the Sikh kingdom, or was it simply a case of acquiescence to a powerful authority—of Sikhs while Ranjit Singh was alive and of the British once he was dead?

These questions are important to subsequent events. A decade after the fall of Punjab, the 1857 mutiny broke out in the British Army. Punjabis played an important role in helping the British subdue the poorbiya troops who had revolted. Our nationalist historians, often eager to invent a past that tides over uncomfortable facts, seek a ‘war of independence’ in this mutiny. The Sikh role is explained away by saying they had little sympathy for a cause that evoked the return of the Mughals, but if so, what explains the participation of a number of Punjabi Muslim troops as well tribal chiefs in the suppression of the mutiny? In 1857, most Punjabi Muslims saw no grounds to make common cause with non-Punjabi Muslims of a region they termed Hindustan.

This fact must be kept in mind when assessing the politics of Punjab under the British and the domination of the Unionist Party, which represented landowning interests across religions, till 1945. While the clash of religious identities set into motion by the British resulted in the Singh Sabha movement among Sikhs and the Arya Samajis among Hindus, in political terms this clash was largely played out in urban areas. Rural religious mobilisation was restricted to the Gurdwara movement that saw Sikhs take on the British and wrest control of gurdwaras from hereditary masands or religious leaders often loyal to the Empire.

Gandhi does observe that ‘what on the surface seemed to be a recurring Muslim-Sikh clash for control over Punjab did not necessarily mean enmity in the villages’. But he does not understand why this was the case. It was not a case of ‘peaceful coexistence at the grassroots’, rather the social structure of much of rural Punjab ensured that the dominant caste in any particular village was either Sikh or Muslim. Thus, they had a shared interest in issues of land and this was represented by the Unionist Party. Punjabiyat was born of this shared set of interests. It influenced how Punjabis saw people outside Punjab but this did not make it fundamental to how they saw each other. When the interests of the dominant groups clashed, as they did once Partition became a possibility, they did not continue to coexist peacefully.

His own background disposes Gandhi to search for hope amidst the violence of Partition by listing stories of those saved by friends and neighbours. It is a self-defeating exercise. In a tribal culture, people extend a hand to neighbours and friends, what they often do not do is accept our common humanity. The violence of Partition was not an aberration, and we have too often portrayed it as a story of victims. Through much of Punjab it was as much a story of perpetrators. A vast number participated in it with no subsequent regret. It was in the end a tribal battle to assert control and seize power. For Sikhs, it ended with the formation of a truncated state they now dominate in India, for Muslims it ended with Pakistan.

Punjabiyat was a product of shared interests. When these interests collapsed, so did Punjabiyat; only Hindus, Muslims and Sikhs remained. Today’s Punjabiyat is only an exercise in nostalgia, it does not even exist in the Indian Punjab between Hindus and Sikhs, leave alone in the diaspora where Punjabi parents get together to hear Bulleh Shah being recited by a visiting singer and then go home to tell their daughters not to marry men of the other community—Muslim or Sikh, as the case may be.

As for the other Punjab, the fact is, even though Gandhi does not wish to take his observations to their logical conclusion, Pakistan came to Punjabi Muslims much as the end of the Mughal empire, the advent of Ranjit Singh or the British did, largely for reasons beyond their control. They had not sought it, it was delivered to them by an outsider, Mohammed Ali Jinnah, but once it seemed real they saw the advantages it offered. As subsequent events have shown, for the tribal chiefs and feudal families among Punjabi Muslims, Pakistan was not an idea, it was a convenience.