The Truth is Out There

Anne Applebaum believes there are many more Gulags that need to be written, and also that her book may not end such tragedies. 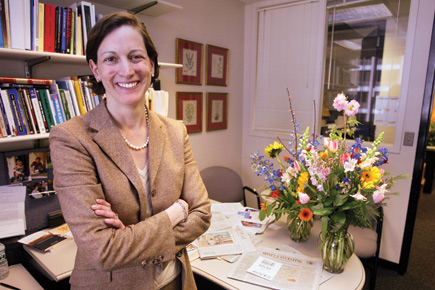 Anne Applebaum believes many more Gulags need to be written, and  that her book may not end such tragedies.


Anne Applebaum believes many more Gulags need to be written, and  that her book may not end such tragedies.

In her Pulitzer Prize-winning book, Gulag: A History, Anne Applebaum traced the origin and development of Soviet concentration camps, from Lenin to Gorbachev. Her book led to many debates as well as many other books on similar subjects. She recounts to Open how she wrote the book and why the issues raised in it continue to demand attention even though so much literature now exists on the subject.

Q While writing Gulag, how did you deal with the tragic events that you were writing about—as a human being and researcher-writer?

A I had different reactions at different times. When I was working on the book, I was so absorbed by the subject, I could almost screen off the horror. It was as if I was trying to do a puzzle, putting all the pieces together. I was trying to understand what had happened and I was trying to work so hard on this that I managed not to feel so bad. If you let that happen, you just couldn’t do it. I find it hard now, there are parts of my book that I can’t read. Now, it’s had time to absorb itself and, in fact, I don’t always like to talk about this book anymore. It could turn into a psychological scar, but I wrote about it from a very lucky perspective since I’m not a victim myself. I come from America and while I’m physically writing it, I’m sitting inside a house, seeing my children play in the garden, and I’d say to myself, “I’m so lucky I’m not one of these people,” and so I had this constant feeling that even though I could be traumatised, it would in some manner be disrespectful to be traumatised. I had to try hard not be like that. I tried not to involve myself, and understand myself as a reporter and a writer and not somebody who was affected directly.

Q As a journalist who has lived in Europe and America, you have written extensively about issues like European foreign policy and collapse of communism. How has this experience influenced your writing?

A As a writer and journalist, I work on all kinds of topics: be it American politics or the first half of Bush’s administration. I often feel that I am a European who writes about America and an American who writes about Europe. I play this role as I often write about America for British newspapers and vice-versa. A lot of my life is spent explaining a different culture to the other—even explaining the British to the Americans is not easy.

Q Your work can also be read as an engaging travelogue. Was that a conscious effort?

A Yes, when I write a book like that, I try to give some sense of the place. It’s important to give some sense of the size of a Siberian tiger, what it can look like… It’s not strictly a travel journal since it also involves research and archival work. I suppose you can describe it as an attempt to explain the system for people who don’t know about the place at all and don’t understand it, so in that sense it is like travelling, a description of what it was like. I’m always thinking in my mind what it was like not just for academics or history readers, but for ordinary readers— how can I make it work for them? In a way it’s not really an academic book, it’s meant to be for people who don’t know about the subject.

Q Many historians, who are otherwise hailed as documentors of major world events, have not drawn attention to the victims of Soviet communism. Do you feel proud on having written a book that is acclaimed as an honest representation of that human tragedy?

A There are other books about communism, mine is not the only one. But it’s true that the subject was not fashionable: firstly because we didn’t have information and people on that side didn’t like to talk about it even to those people whom they perceived to be on their side. It’s a little bit different now—certainly in western Europe—and since the archives on communism are open, discussion on Soviet history is much more balanced. It’s become much more central and people are interested in it. Books about Russia and the Soviet Union have sold very well as popular books in the UK and US, Sweden, Germany, France in the last decade.

Q As a woman, was it easy or difficult writing about a tough subject like the Gulag?

A I didn’t have any special trouble writing this book, though I’m often asked that. It’s almost the opposite—as a woman, if you are dealing with as tough a subject as that, people are more than willing to help and you find it easier to speak to survivors. People help with “Oh, my goodness, what are you doing here in Siberia?” and “We must take care of you!”

Q When you won the Pulitzer, you had said that such heinous totalitarian ideologies will come into action again. Do you still believe that?

A There are things that are happening in Korea, in the Chinese regime, even contemporary Russia, which should worry people, and I’m not going to pretend that my book will stop these things. But there is a history of these things that have happened before, they can be spotted, they can be understood and we should be aware of them.

Q With the kind of relationship that China and Europe share with the US, how is our world likely to shape up?

A The US and China is very complicated. There are people talking about the G2—which is incorrect because the US and China don’t really share values, they are never going to cooperate in the way that Americans and Europeans can cooperate. Not because they can’t do so with Asians but because their societies are based on different values. And though people tend to look at the US and China dividing the world, I’d prefer to look at the US and India dividing the world—in some ways, there is more potential for cooperation in geopolitics between India and the US. As for Obama—it’s still too early to talk about how Obama’s interest in India will translate into…

Q Do you think perceptions of the past continue to shape the present, specially in Central Europe?

A Yes, it’s very, very important in Central Europe. It’s important in all countries, but in Russia it’s integral because of the way in which the past is remembered and discussed in contemporary politics. Putin’s decision not to talk too much about the past shows that he wants to present a different history of Russia: the socio-cultural vision, the kind of Imperial Russia that he admires and wants to promote. And that has echoed through people since some people there like to hear that, specially after two decades of national failure. By doing that, [however], you deny people real experiences, since people remember the past, and it is also possible to resurrect the past.