An extract from Martel’s novel, within which is incorporated a play about a donkey (Beatrice) and a monkey (Virgil). 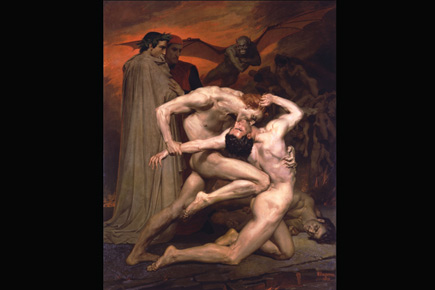 An extract from Martel’s novel, within which is incorporated a play about a donkey and a monkey.

VIRGIL: (who has his back to her, swaying, nearly falling, but still managing to stay balanced on one leg) Oh, you’re awake! Good morning. How did you sleep?

BEATRICE: Very well, thank you. Guess what I dreamed about?

BEATRICE: In my dream I certainly did. It was bigger than a pineapple.

BEATRICE: You asked a question yesterday.

VIRGIL: (still balancing) Did I? How pointless.

BEATRICE: No, it was a good one. I was thinking about it last night as I was falling asleep.

VIRGIL: (still balancing) What question was that?

BEATRICE: You asked, “How are we going to talk about what happened to us one day when it’s over?”

“That’s the key question in the play, how they are going to talk about what happened to them. They come back to the question again and again.”

“And to answer the question I asked you at the café,” Henry broke in, “about what happens in the play, in effect what happens is they talk about talk.”

“I think of it as talking about memory.”

If Henry hadn’t seen it earlier, he was starting to see now where the problem lay with the taxidermist’s play, why he needed help. There seemed to be essentially no action and no plot in it. Just two characters by a tree talking. It had worked with Beckett and Diderot. Mind you, those two were crafty and they packed a lot of action into the apparent inaction. But inaction wasn’t working for the author of A 20th-Century Shirt.

Henry wanted the taxidermist to explain his play, but he didn’t want to be the first to invoke the Holocaust. He thought the taxidermist would be more forthcoming if he brought it up himself.

“Let me ask you a simple question: what’s your play about?”

As soon as the question had left Henry’s lips, the irony of it leapt to his mind. It was the same question the historian had asked him during that terrible lunch in London nearly three years ago, the question that had gutted and silenced him. And here he was asking it himself. But the taxidermist had no problem dealing with it. He practically shouted his answer.

“It’s about them!” His hand violently swept the room.

“The animals! They’re two-thirds dead. Do you not understand that?”

“In quantity and in variety, put together, two-thirds of all animals have been exterminated, wiped out forever. My play is about this”—he searched for words—“this irreparable abomination. Virgil and Beatrice call it—wait!”

The vehemence and conviction of his tone took Henry aback. The taxidermist dove into his papers again. For once he found what he wanted quickly:

BEATRICE: What name will it have?

VIRGIL: Not descriptive enough, and it carries no judgment. Name and nature must be combined.

BEATRICE: The Unthinkable? The Unimaginable?

VIRGIL: Why even bother with it if it’s unthinkable or unimaginable?

VIRGIL: If we can’t even name it, how can we talk about it?

VIRGIL: The weather had nothing to do with it.

VIRGIL: Could be anything, a flood, an earthquake, an explosion in a mine.

VIRGIL: Could be a forest fire.

VIRGIL: Sounds like something done quickly, involving running and panting. Not enough calculation to it. Besides, it’s been used before.

BEATRICE: Even better: the Horrors, plural but used in a singular construction, the curve of the s like a ladle in a soup from hell, serving up the unthinkable and the unimaginable, the catastrophic and the searing, the terror and the tohu-bohu.

VIRGIL: We’ll call it the Horrors.

BEATRICE: So, how are we going to talk about the Horrors?

Excerpted with permission of Penguin Books India from Beatrice and Virgil: A Novel by Yann Martel