The Pole Vaulter’s Guide to the Galaxy

These essays strengthen Amitava Kumar’s engagement with the ‘euphorically’ real 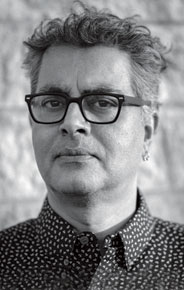 The writer’s life is suffused with guilt and anxiety about being a writer. Everything—all the heartaches and suffering, whether felt or observed— is grist. Towards the end of his superb collection of essays, Lunch with a Bigot, the author Amitava Kumar quotes these lines from Kafka’s diaries: ‘Have never understood how it is possible for almost everyone who writes to objectify his sufferings in the very midst of undergoing them.’

In this particular piece, entitled ‘Missing Person’, Kumar presents a detailed account of his mother’s funeral, among the most moving narratives of personal loss we have in contemporary literature. It’s the honesty of this portrayal, its directness (‘My mother’s nails and toes were painted red before I lit her funeral pyre on the banks of the Ganges.’) that touches the reader. But here, we also see the writer as a suffering soul, a bereaved son, whose aim is not so much to objectify his pain as to share it with others. ‘I was self- conscious about the notes I was taking,’ is Kumar’s proviso to the reader, a reminder that the writer here, no matter how objective and all-absorbing his gaze, is after all a thinking, feeling human being.

A similar moment occurs in the book’s eponymous essay, ‘Lunch with a Bigot’, Kumar’s account of meeting a right-wing Hindu NRI, Mr Barotia, who put the author’s name on an online ‘hit list’ (this title was later rechristened, we’re told, to ‘black list’) for marrying a Pakistani woman. It is written with Kumar’s characteristic ease, the product of an elegant simplicity that is sometimes exquisitely at odds with what is being depicted. ‘[O]n the phone he had called me a haraami, which means bastard in Hindi, and, after clarifying that he didn’t mean this abuse only for me as a person but everyone else who was like me, he had also called me a kutta, a dog.’

Later, Mr Barotia lets loose another of his many abusive broadsides, uttering a few unmentionable obscenities about Kumar’s wife, Mona, who asks her husband how he responded to the abuse. ‘I said that I had done nothing,’ Kumar writes. ‘It would have been more accurate to say that I had made a mental note of what [Barotia] had said. I had told myself that I needed to write down his words in my notebook as soon as I was back on the train.’ This advice—that a budding writer must take notes extensively—doesn’t feature in Kumar’s essay, ‘Ten Rules for Writing’, which should also have included another crucial piece of writerly counsel he places in the prologue. Kumar, a professor of English at Vassar College, writes: ‘I encourage my students to become journalists.’ The bookworm, in other words, must try to leave the confines of his study and engage with the real world.

Subdivided into ‘Reading’, ‘Writing’, ‘Places’ and ‘People’, the 26 essays in this collection are about journeys. Often, it is the writer’s imagination undertaking the journey: ‘The act of opening a book or entering a library also produces results akin to travel,’ Kumar writes. And throughout the book, we get glimpses of the writer in transit, thinking aloud, and often even writing, on trains and aeroplanes. There is more to this than just the jet-setting ways of modern life. To be forever in transit is the condition of the immigrant writer: the mind always oscillating between home and away, and always homesick in each landscape.

‘Exercising the agility of a pole-vaulter in the Olympic Games,’ Kumar writes in ‘Reading Like a Writer’, ‘I use any relevant detail in a story as a kind of lever to launch me into the other landscape.’ This expert act is on show throughout in Lunch with a Bigot: moving from Gandhi to John Cheever; from Virginia Woolf to a prison house in Patna.

At one point in the book, Kumar says that he sometimes sees himself as a ‘partisan for good nonfiction’. His only work of fiction was itself first envisioned as an extended piece of reportage. ‘An editor friend,’ Kumar tells us in ‘Writing My Own Satya’, ‘urged me to give up the idea of writing a non-fiction book about [Manoj] Bajpai and Satya.’ And what ensued was Home Products (2007), a complex narrative exploring small-town lives, urban migration, cinema and literature. The rest of Kumar’s corpus—including his perceptive biography of his hometown Patna, A Matter of Rats (2014), and his account of marrying his Pakistani wife around the time of the Kargil war, Husband of a Fanatic (2004)—can be seen as more directly engaged with the world, perhaps a result of what Kumar calls his ‘yearning for the real’. ‘The painfully real,’ he writes in an essay about the problem of authenticity in contemporary fiction, called ‘Bad News’, ‘the brilliantly, euphorically real, the emphatically real.’ Lunch with a Bigot is also beautifully real.