The Man, the Mind and the Game

Here is a cricketer who was too young to consume the bottle of champagne he received upon winning his first man-of-the-match honour. The legend of Sachin Tendulkar in his own words 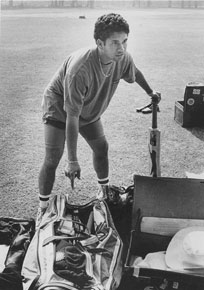 Here is a cricketer who was too young to consume the bottle of champagne he received upon winning his first man-of-the-match honour. The legend of Sachin Tendulkar in his own words

It is difficult to roll one’s mind back to a time when Sachin Tendulkar was not already a legend. And it is more difficult yet to figure out the ways in which the legend of Sachin prevents us from getting into his skin. I, for one, have never been able to shrug off the confusion of an early summer day in Multan, bewitching city of saints, during India’s Test tour of Pakistan in 2004. Close of the day’s play and India were clearly on their way to a historic victory. Rahul Dravid, standing in as captain for an injured Sourav Ganguly, had declared the innings at 675 for 5, a declaration that took all of us by surprise because Sachin was then batting on 194. But this was Team India, a new look and purposefully- minded team remodelled after the recent match-fixing scandal, and it was constantly breaking out of the comfort zone of a more lackadaisical sporting culture. It seemed odd for Sachin to be left stranded six short of a double century when victory was certain and the remaining time was abundant, but we willed ourselves to believe that this was a statement of intent: nobody’s milestones would be allowed to detain India in their pursuit of victory, not even the great man’s.

In any case, the moment was Virender Sehwag’s. He had reached the first Test triple century by an Indian, and at play’s end we waited in the press room for him; he was the player of the day and would by protocol come by for a chat. Imagine the buzz when Sachin too turned up. What a story! Here was Sachin offering himself up for a grilling. There was an edginess about him, and even as he lauded his mate’s record, he did not deny that he was “disappointed” about not getting to his double. Yet there was reticence over posing the question about the timing of the declaration too forcefully; even though Sachin, uncharacteristically, had opened up. It soon became clear that very few of us, a huge media party on a ‘discovery of Pakistan’ tour, wanted him to. A sports editor tapped me on the shoulder and sternly whispered, “Stop asking him questions.” Ultimately the overall mood in the room prevailed: to keep Sachin from saying too much.

Not that he would have said more than he meant, but that moment has stayed with me. What brought him to the press conference that day? What did his declaration say about India’s regard for his records, for his obvious and deservedly special place in the squad? What did his public display of petulance betray about his expectations of his team? Was it a sense of entitlement? Or was it raw hurt at being stunned into falling short in full public view, and for no reason that could have a bearing on the team’s eventual fortune? Could the most special player so casually be denied a double century? Or had there been a plan that he, in fact, had misunderstood? More starkly yet, could it be that India and Sachin were now on parallel tracks, the one getting on, workmanlike, and the other playing for the record books?

To be sure, Sachin never approached even that rather polite show of hurt or disappointment ever again. And, of course, his career provides a ledger that shows he was never, not once, extraneous to the team’s gameplan. And now—a year, almost to the day, since his retirement from cricket—it is not just that there is no sign to be found in the stats that he played for anything but the team. It is, more importantly, evident that Sachin’s records have been, in effect, Indian cricket’s accomplishment. For long stretches, his innings were all that mattered on India’s scorecard. His stamina raised Indian cricket’s profile. And the dynamic by which the man was the team’s essence and equally a presence apart from the team, is one that still has to be articulated. But these were not questions we could trouble Sachin with. He gave an honest and outstanding account of himself on the field, and it did not feel right to ask for more. We did even think to ask for more. Those questions were for us to argue over, not to be posed to him.

It is thus that Sachin’s autobiography has created a vacuum where none previously existed. The book gives an account of his application and staying power, the training sessions with “Achrekar Sir”, of season upon season of remaining fighting fit and focused on the match at hand for 24 years of international cricket. Here is a cricketer who was too young to consume the bottle of champagne he received upon winning his first man of the match honour! And by the time he retired, he had seen out generations of Indian cricketers.

It is really the strength of the book, its success in conveying what such a great career is made up of: unwavering discipline and dedication to play out each match in that moment, year after year. The records came because this extraordinary sportsperson served cricket by being true to the field, whatever the opposition, stakes or context, by making every innings count. Playing It My Way conveys this, the tears, the joy, the pain, the sportsmanship.

At times the autobiography appears to be a cascade of match reports, but that was—is—Sachin’s life. Cricket was the organising principle around which all else fell into place. Forget the records, the hundred centuries in international cricket, the turns with the ball that demolished the opponents, his morale-boosting presence, his consistent contribution to the brains trust. What made him exceptional—and here I will go out on a limb and say that without the moral centre he provided, Indian cricket could not have weathered all the crises it did—was the code that he had internalised.

This internalisation came early on, in the training as a pre-teen, living with his aunt and uncle to cut the commute, and the most touching part of the book is his recollection of crying all the way home to Bombay after a disappointing innings in an under-15 match. His sleepwalking is well-known, but the passage about his roommate Sourav Ganguly during the 1991-92 Australia tour being startled upon waking up in the middle of the night to see him shadow- practise still makes you pause in amazement. As does his recollection of celebrating the 2011 World Cup victory with his wife Anjali by retiring to their room, putting flowers behind their ears and dancing, the party soon enough bringing his teammates together into a tribute. These are little, gentle moments, and they are precious as in them you can almost hear him, carefully choosing his words.

But in walking us through his years, Sachin also opens up gaps in his life story, making us sit up and demand more than we would otherwise have thought to. On Multan, for instance, he recounts his chat with Dravid, during which he shared his disappointment: ‘Rahul said that the call was taken with the interests of the team in mind. It was important to demonstrate to the Pakistanis that we meant business and were keen to win. I wasn’t convinced… I said to him I was batting for the team as well. Yes, I had scored 194, but the 194 was meant to help the team and it was my individual contribution to the team’s cause.’

And then: ‘I reminded him of what had happened in Sydney less than a month earlier, when we had both been batting on the fourth evening and Sourav had sent out two or three messages asking when we should declare and Rahul had carried on batting. The two situations were comparable and, if anything, the Sydney declaration was far more significant and may have cost us a Test match and series victory. If Rahul was so keen to show intent here in Multan, he should have done the same in Sydney.’

Thereafter, the incident is closed off with an assurance to Dravid that it would have no bearing on their relationship, and indeed with a concluding line about their friendship. But look at the intriguing lines of inquiry about team effort and individual targets he leaves us with, an inquiry integral to his career profile. It is thrilling as a cricket fan to be alerted to these questions—but we don’t get Sachin’s interior dialogue.

So it is with Greg Chappell’s controversial coaching stint, Sachin’s own experience of captaincy, Kapil Dev’s coaching, the match-fixing fallout, IPL’s effect on cricket and the BCCI’s functioning. We just don’t get to walk through these subjects with him in an involved manner, and the promise of hearing his story as he lived it goes unrealised. We didn’t demand to know. But now that Sachin mentions all this and more besides by way of drawing the arc of his career, we need to find out. After all, he brought it up.

(Mini Kapoor is a Delhi-based writer)