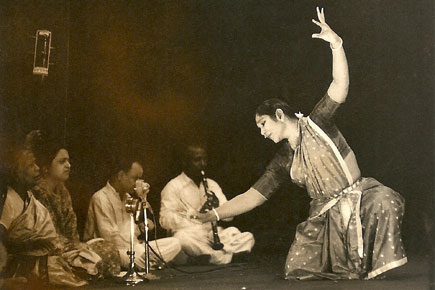 
Balasaraswati was one of those monumental figures who seem to require cliches, like ‘a legend in her own time’. She died in 1984, having achieved all the honours that reward exceptional artistry. Her place in the history of dance was assured—significant, poignant and pivotal. Because she had been born into the family of Vina Dhannammal, with a great lineage of musicians and dancers, and  grew up to dance at a time when the art now called Bharatanatyam was perceived as crumbling at its very foundations, she embodied the last flowering of the devadasi tradition.

Devadasis are at the heart of the story of Bharatanatyam, but the word is thrown around in so many contexts that it hardly has any meaning. There are devadasis, and then there are devadasis.

Devadasis in books perform temple rituals, dance at the courts of kings, live in cozy matrilineal households singing and dancing the whole day long without any pesky men to bother them. They are nityasumangali, ever auspicious. Real devadasis, the ones you can meet and talk to, live a different sort of life altogether. I went to northern Karnataka where the institution still thrives, because I was sick of reading about them; I wanted to understand the word as a lived experience. The women spoke of being dedicated to a temple before they even knew what that meant, losing their virginity at 10, 12, 13 years of age to the highest bidder, doing sex work because no other work was available to them. Yes, they do live in matrilineal households, but it’s just as bad if a woman forces you into sex with some man you don’t know. Yes, they are nityasumangali, but it turns out that’s not like getting a Padma Bhushan, some great honour. It’s more like a licence for men to make use of them. As one devadasi said to me, “If it’s so wonderful to be nityasumangali, why are high-caste rich girls not dedicated to the temple?”

Three strong women, linked in a triangle of opposing forces, shaped Bharatanatyam as we know it today:  Balasaraswati, the devadasi dancer who had so much to lose—her way of life; Dr Muthulakshmi Reddy, the legislator who fought for the girls without much concern for the art; and Rukmini Devi, the outsider who loved the art form.

Now imagine you are the one being asked to make a choice—an art form dies, or a 12-year-old girl gets raped by a man old enough to be her grandfather.  Would you say, “Well, it’s just one or two girls, the art form must be kept alive at any cost”? Or would you let the art form die? What if it was a really beautiful art form, with a long, rich tradition, part of your language and culture, and you’d been raised from babyhood to practice it? Or what if you were a doctor, and the young girls who had been brutally raped were turning up at your doorstep with venereal diseases and nowhere else to go? What if you saw the dance from the outside, saw how it could resonate in a wider world? What would you choose? Of course, the dilemma is not being presented in such stark terms by the new breed of academics and writers eager to paper over the abuses of the devadasi system in the name of art. Academics, many of them White, raised on feminist theory, twist themselves into knots to make the good guys and bad guys come out in a way that suits their agendas vis-a-vis the art form, while ignoring the abuse of young girls.

Douglas M Knight Jr goes through some of those contortions in Balasaraswati: Her Life and Art. For example, he states that he couldn’t find ‘anything resembling a socially-defined sexual role for a devadasi’. The devadasis of Gokak could have helped him, but he need have looked no further than the padams and javalis (melodies) of Bala’s repertoire, which speak of that role in explicit terms—the payment, the positions, the youth and inexperience of the girls available for sex.

There are good reasons why there is lap dancing but no lap painting. The connection with sex and prostitution is part of the history of other dance forms too—the tango, ballet and belly dancing, for example. While Bala was being trained in a highly-refined dance form, other women whose practice went by the same name were entertaining men at bachelor parties. My father told me of one such performance where the dancer pretended to drop her nose-ring, and then ‘search’ for it in the laps of the exclusively male audience members (pun intended). Lap dancing, indeed.

Knight states in the preface that he is telling us ‘the story a family told about itself’, and he certainly is well placed to do so, being a member of that family, married to Bala’s daughter Lakshmi. I needed to keep reminding myself that this is not meant to be a fair and even-handed history of Bharatanatyam, even in the chapters of the book where that is what it tries to be.

If one believes, as Bala seems to have done, that the art form could not exist without the institution of devadasi dedication, then it makes sense that Dr Muthulakshmi Reddy and Rukmini Devi are the bad guys: the first destroyed the institution, and the second demonstrated how the art form could have a vibrant, glorious life without any devadasis being involved at all.

It takes a lot of twisting to make Muthulakshmi Reddy into an agent of evil. Her own mother was a devadasi, so hers was an insider’s view of the institution. The young firebrand insisted on going to college, then became a medical doctor, one of the first Indian women to do so.  She became a social activist committed to women’s issues. In her autobiography, she describes how young temple-dedicated girls escaped and came to her door, begging for help. Her response—drafting a bill that led to a ban on the dedication of girls to temples—suggests that her attitude was, ‘Let’s deal with the abuse, and let the art form go to hell!’

Rukmini Devi more easily fits the villain bill, slipping nicely into a story of appropriation that makes devadasis themselves, and not the institution, the victims. In this version, she stole their art form,  took out all the naughty bits, gave it a new name and a fake history without devadasis in it, and kept all the glory away from Bala, the one who really deserved it.

This is a more worthy debate, one that comes up in other art forms and other contexts. It’s the ‘Can White guys play the blues?’  debate. Comedian George Carlin had his opinion: ‘White people ought to understand it’s their job to give people the blues, not to get them’. If you buy that argument, then, yes, Brahmins can’t do the devadasi dance style, Blacks can’t play Mozart, Tamils can’t rap—hey, wait a minute, this is  the place where artistes, as opposed to academics, jump off that bandwagon. White musicians who pick up a slide guitar, Black musicians who pick up a cello, Brahmin women who take to dance and painstakingly learn, incorporating the art into their arms and legs and fingers, do so because they love the forms. You can’t make the sacrifices otherwise. This argument, though, is never brought to the surface of the book. Instead,  it is allowed to simmer as a subtext.  What Rukmini Devi does, for example, when she adapts the art form to suit her artistic vision is ‘reconstruction’, ‘revivalist’, ‘text-based’ (bad), while what Bala does is ‘make stylistically appropriate and consistent alterations only after long experience within the context of a particular family style’ (good).

When Knight leaves aside the contextualising, and tells the stories of Bala learning to dance and making her mark as an artiste, it becomes clear that there are no good guys and bad guys. The changes in Bharatanatyam were inevitable, necessary and for the best— changes that any art form goes through as contexts, moralities, politics shift. After all, dance doesn’t happen in a vacuum. The gurukula system allowed serious forms of abuse—Bala was beaten and scarred by her teacher. The hegemony of male nattuvanars  restricted a dancer’s full growth and expression—when Bala’s nattuvanar left to go and teach, she was powerless.  The concert stage made demands on the artiste that changed the form—Bala and her mother, who sang for her, had to control their tiffs once the microphone became ubiquitous.

I wish the book had been more full of stories of Bala and her illustrious family. These are pure delight: Vina Dhanammal demanding a silver hookah in the shape of a swan with wings that moved as a fee for a concert; Bala as a three-year-old, dancing along with a mad, dancing beggar; then, as a mature artiste, not finding the moment of transportation on stage; at Wesleyan, conspiring with her daughter Lakshmi in Tamil to get away to watch a soap.

There is a charming photograph of Balasaraswati with her good friend MS Subbulakshmi as teenagers, dressed in Western-style pyjamas, holding cigarettes, full of giddy, vivacious life. On the next page is a picture of the staid, older (by 26 years) man who became her patron. He already had a wife, of course, and when he died he left Bala and their daughter Lakshmi without support. This story, I think, would resonate with the devadasis of Gokak.

When I began learning Bharat-anatyam in the 1970s, the times they were a’changin’. Zeenat Aman was singing Dum Maro Dum, Protima Bedi was running naked on Juhu beach. Yamini Krishnamurthi and Lakshmi Viswanathan were performing Bharatanatyam with an empowering eroticism that curled my toes. Balasaraswati performed in Madras, but I didn’t bother to go see her; she seemed like an anachronism. The dance form had moved on. This book did make me wish I had seen her dance. Now all I  have to conjure her with is a film by Satyajit Ray, made when she was well past her prime. Knight fails when he concentrates too much on the adulatory words of critics, suceeds when he tells stories and lets her own words convey her deep intelligence and self-deprecating humour. Bala said, “I don’t know if I’m a great dancer, but I do know I’m a great cook.” He could have left out the reviews and included some of her recipes.