“The history of racism varies with the decades… like fashion”

As part of a monthly conversation series organised by Open at Smoke House Deli, William Dalrymple spoke to Pavan K Varma about writing for a foreign audience, romanticising the Raj, and much else . Excerpts: 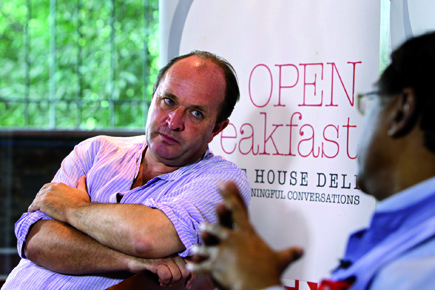 As part of a monthly conversation series organised by Open at Smoke House Deli, William Dalrymple spoke to Pavan K Varma about writing for a foreign audience, romanticising the Raj, and much else . Excerpts:


PAVAN K VARMA: The moment I mentioned your name—(sound of a chair drag)

VARMA:I want to ask you about [your] first book… At that time, Willy had a much slimmer persona, [and a] far greater body of hair… When Willy came [on the scene], the scepticism with which you see a foreigner trying to discover your country [was], in my case, very quickly overcome by the transparency of his passion… It is an audacious project to profile a city. [City of Djinns] was a success. Was it written partly with a foreign audience in mind?

DALRYMPLE: …It’s true that for both my first two books, I had a very specifically British audience in mind. I was lucky that I started writing at a time when travel writing was extremely popular in Britain. There was this great wave in the late 80s… Patrick Leigh Fermor… Bruce Chatwin, Paul Theroux, Eric Newby—these were big bestsellers when I was at university… I arrived on the scene in 1986 [when] I did this journey following Marco Polo while I was still in college… I don’t think either of [my first two books] initially had an American publisher and I certainly didn’t imagine that either would sell very well here. I think City of Djinns was actually a bestseller here, surprisingly, but in those days that meant 4,000 copies. In the early 90s, [that was] a bestseller in English in India; today, of course, it is 50-60-80,000 [copies]—a measure of how the market has changed.

One of the strange things that has happened to me in the course of writing nine books is that, certainly with Nine Lives, my biggest audience is not in Britain anymore but here. Nine Lives sold [around] 45,000 hardback copies in India and it was the book I was most frightened of releasing to the Indian audience. Of all the subjects a foreign writer can write about, the three most clichéd are poverty, maharajahs and mysticism. This, obviously, was the third and I thought it would get a very hostile reception in India. In the end it turned out the British were not at all interested in it; it hardly sold [there].

Americans, funnily enough, are into a particular form of Indian mysticism, and it sold very well in California, but for all the wrong reasons, I suspect.

VARMA: I greatly enjoyed City of Djinns… and obviously you were writing with a sense of an observer who empathises greatly with his subject, but when you write for a foreign audience primarily, what does it do to the projection of this subject? Do you choose frames which you believe will get a better response, even if they exclude areas that should’ve been a part of the narrative?

DALRYMPLE: When I write now… I do write very differently, with an Indian audience in mind, but the only difference is how much you explain. In both cases I write what interests me and what I think will interest my audience and I try to tell the best story in the most well researched manner that I can. The difference is how much you explain. Today, nothing goes into italics. There was a famous instance where Rajesh Joshi wrote a very cruel review of one of Pankaj Mishra’s books where he showed how much Pankaj had explained daal—a confection of lentils fried in onions or something. You can tell who the author is writing for by how much he explains. I remember Arundhati Roy making a comment in an interview when The God of Small Things came out that she made a point of not explaining various aspects of Mallu culture, of the culture of Kerala. Because, she said, John Updike would not explain to me how to play a baseball game; you can look it up if you want to. And there were complaints from my British audience about this—that I was assuming that people would know stuff that they didn’t. But I don’t think it fundamentally alters the way that I personally go about writing a book. You still try to tell the story in the most interesting manner, in a sense, for yourself; the only difference is how much you explain.

VARMA: Moving to your next hat, that of the historian, and your pre-occupation with the Raj, starting with White Mughals. Do you imagine yourself as a White Nabob?

DALRYMPLE: I have never written about the Raj proper. The Raj proper begins in 1858 with Queen Victoria taking over the Government of India and it ends 1947 at the Gateway of India. And it’s a period which has been much written and argued about, probably the best written about period of Indian history. The period that I have been fascinated about and become a specialist in is the period stretching from 1739 to 1857—the period from Nadir Shah to [Bahadur Shah] Zafar—and that in contrast is one of the least studied periods. The Raj proper, [by] technical definition, begins in 1858 and what I am interested in is the twilight and the East India Company. The company seems to me to be the most fascinating and sinister organisation in world history. It was not the British who conquered India; it was a public limited company. It was a company which had shareholders, which had annual general meetings, which had dividends—

VARMA: But which had the backing of the government…

DALRYMPLE: Eventually. And that whole story is fascinating. And there is no modern equivalent. The modern equivalent would be Halliburton, if Halliburton were nuclear, or if PepsiCo had fighter jets. It is a deeply sinister organisation and you have a company taking over a continent. It is a unique thing in world history and something which absolutely fascinates me… The Company begins in the year 1599, which is the year Shakespeare writes Hamlet. It’s in a Jacobean England, [at a time] when India is the richest polity in the world—what China is today, what America was in the 80s, what Britain was in the 19th century, India was in 17th century. The British arrive in India as scruffy provincial underdogs trying to get a bit of the commercial action that’s going on here. When Milton writes Paradise Lost, he takes Adam on a tour of the future wonders of humanity… and if you [were to] do it today, you’d go to maybe Shanghai or New York, but Milton takes Adam on a tour of Fatehpur Sikri, Delhi and Agra, as the supreme wonders of the world to come. So you have that early phase when the British are underdogs, scruffy guys with codpieces trying to get a bit of the action.

VARMA:With respect for the local civilisation…

DALRYMPLE: That comes next. Then you get [a phase when] there is a measure of cultural parity; where the British are a bit more powerful but they can still be beaten. In 1779 at the Battle of Pollilur, Tipu Sultan defeats the Company, takes their entire army prisoner. The power is debatable and a chance fluke in a battle can make it go either way. At this point, you get a measure of inter marriage—one in three British men in India is married to an Indian woman. As power decreases on the Indian side and increases on the British side, as industrial revolution kicks in, as a militarised, mechanised army arrives, as the British government becomes more involved as opposed to the Company, you get to see that slipping away. So from one in three inter marriages in 1780s, it goes to one in four in the 1800s, one in five by 1810, one in six by 1830 and more or less gone by the 1840s. And then you get a measure of racism setting in. The history of racism varies with the decades—it is not a solid thing. It is like fashion—like hemlines or anything else. High British racism kicks in properly in the 1830s and 1840s, and you get a completely different attitude…

VARMA: Have you ever been accused of romanticising some aspects of what the British interaction brought to India?

DALRYMPLE: I think there were accusations of romanticism in White Mughals. And I had a very interesting debate with Pankaj… We had a disagreement over White Mughals. He thought it was a very romanticised take. We had a long debate in an American journal. But by the time The Last Mughal came out, there was much less of that, in that The Last Mughal gives, I think, by far the most graphic account of British war crimes [in Delhi] that has ever been published. [It] revealed the degree to which the British completely destroyed a city and created what in any modern court of law would be described as terrific war crimes. In the final instance, the gates were locked, troops were placed outside each of the exits and every single male who was found in the city of Delhi—over the age of 16—was killed.

VARMA: And the vandalisation of the city! Bayonets [scraped] away even the last semi-precious stones of the Divan-e-Khaas in the Red Fort. The whole ground was cleared up to Jama Masjid…

DALRYMPLE: Again, we use the term ‘the British’. It is always important in these things to distinguish individuals. The fact that Jama Masjid exists at all today—because it was slated to be replaced by a Gothic Cathedral—is due to the Governor of Punjab, who arrived just in time. And the fact that the Red Fort wall survived… The British were all set to follow the original plan to completely destroy the Red Fort.