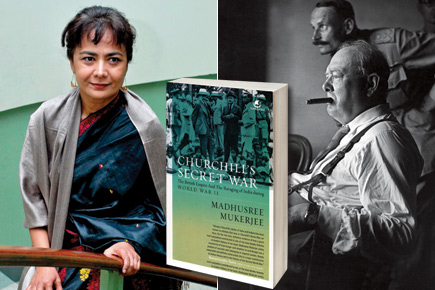 
In her gripping, powerful and frightening new book, Churchill’s Secret War, historian Madhusree Mukherjee exposes what could be called a ‘genocide’ perpetrated on India by Winston Churchill, the British Prime Minister during World War II. It is estimated that the great Bengal famine of 1943 killed three million Indians. This could have been prevented had sufficient foodgrain remained in India or had emergency imports been done and distributed in Bengal. However, Churchill personally ensured that almost all the foodgrain that could be mopped up was exported to the British war effort, resulting in the highest death toll in India in the past three hundred years. Here, in a candid interview, she discusses the famine years and the racist Churchill’s  blood lust.

Q You paint a frightening picture of famine, with dead bodies littering the streets. Which were the worst affected areas and which was the particularly bad year?

A The worst was eastern Bengal in what’s now Bangladesh. There was severe repression in the Tamaluk district of Midnapore that caused a very large death toll.
Were there actual instances of families resorting to cannibalism and selling their children in desperation, as was the case in a later famine in China in the 1960s?

Q What was the overall death toll in the famine?

A There were no reported incidents of cannibalism. However, there were numerous cases of children being sold or abandoned or even killed out of mercy by their parents. The total number of people killed in the famine was at least three million.

Q How much food was diverted for the Imperial war effort from India?

Q Will it be fair to say that the picture of the British as benign rulers of  India is slowly changing in contemporary history? Is it now recognised that their racist tone led to the mutiny? And you’re now talking about Churchill’s murderous personality.

A There is a growing consensus among historians now that the British Empire was far from benign. It was exploitative and often viciously so. However, the lay person has not really been able to comprehend that. Hopefully, that will change.

Q Churchill, who emerges as a vicious racist in your book, systematically constructed a famine in India by plundering its men and its grain and diverting it to the British war effort. Would it be fair to say that Winston  Churchill led a genocide against India?

A Genocide requires knowing intent. I don’t think we have enough knowledge of what was in his mind to say for sure that it was genocide. However, from the evidence we have, we can certainly make a strong but not conclusive argument that Churchill did indeed plan a genocide on India.

Q How important was the fact that nearly every Indian leader was in jail during the war effort and the Congress could not mount an adequate political response?

A The political leadership could have helped mobilise relief from other parts of India. The truth is that the war cabinet did not take Indian leaders seriously. Ultimately, massive food  imports were the only way that the famine could have been prevented, and Churchill was set against that.

Q If we combine the famine with the hasty British decision to partition India, the British were complicit in the deaths of perhaps five million Indians. Yet  Nehru remained ‘loyal’, making Mountbatten governor-general of free India. Do you think Nehru insulted the millions killed by British acts? In any other country would not such imperial plunder have led to an armed revolt?

A I do think that Nehru was too close to British ideals and was essentially a man of the West. Beyond that, I do not know enough about him to pass judgment. The Indian populace was generally disarmed, and while the armed forces did mutiny, it was only after the war and sporadic.

Q Back to Churchill, he comes across as a blood-thirsty terrorist, supporting gas attacks and scorch-and-burn tactics—things regarded with horror today. Do you see history reassessing his role, specifically the OxBridge scholars who have lionised him? Have they been guilty of ignoring facts?

A A great deal of reassessment of Churchill has taken place. Only the public and a few diehard scholars still seem to venerate him.