The Fake Truths of IPL

Remember the fakeIPLplayer blog? It’s back as a book and it’s witty, engrossing and often rings quite true. 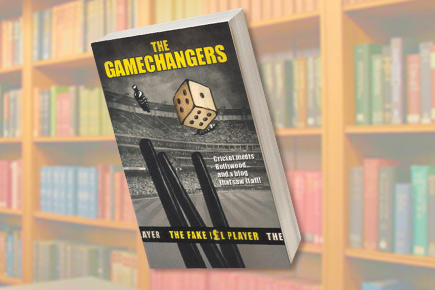 Remember the fakeIPLplayer blog? It’s back as a book and it’s witty, engrossing and often rings quite true.


About events like the IPL you tend to forget more than you remember. Such is the pace of action and the character of the event itself. In such a scenario, the one lasting memory from the second edition of the IPL is the fake IPL player blog that captured the nation’s imagination in April-May 2009. Now the blog has been turned into a book. Full of tongue in cheek humour, astute observations about the ugly underbelly of Indian cricket, and more specifically, the IBL (Indian Bollywood League in the book), The Gamechangers is an exciting read for the cricket fan the world over. Unless you are an insider lampooned in the 400-odd pages, you will find the book absorbing and funny: absorbing because the blogger tends to get a number of things right and funny because he has the gumption to lampoon the men in power without fearing the consequences.

The book is set in England where the blogger has taken his IPL in trying to salvage the tournament. He has documented a story both intriguing and infuriating. Intriguing because cricket, the game we love, is a relic in the current scheme of things, and infuriating because we have allowed it to reach such a pass.

If Lalu Parekh a la Lalit Modi has his way, says the blogger, international cricket controlled by the ICC will soon give way to corporatised club cricket aka IBL. That Rocky, the small town star from Kanpur and the book’s hero (Mahendra Singh Dhoni), holds out against this is refreshing. It is indicative of the fact that not all is lost yet to the glamour and glitz and the incredible reach of the dollar.

Also of interest is the sense of frustration star owners feel at losses. What celebrity owners don’t understand is that unlike in Bollywood, where stars act to a given script and perform to a predestined ending, things are profoundly different in cricket. Even the best of players can and will have off days because it is sport—pure, unadulterated drama uncontaminated by elements of certainty. And that has for more than a century added to cricket’s aura.

But the best part of the book is the near-perfect way in which the Calcutta Cavalry (KKR) coach-captain-team owner ego tussle has been documented. John Buchanan, who played second fiddle to Steve Waugh and Ricky Ponting in Australia’s world cup wins of 1999 and 2003, was suddenly determined to take charge of the Knight Riders (Calcutta Cavalry in the book). Differences between captain and coach were out in the open even before the first season was over. That Shah Rukh Khan (Sigwald Raees Kahn in the book) added fuel to the fire by allowing Buchanan to have the last word and appoint Brendon McCullum (Brian McMillan in the book) as skipper is now well known. This is interesting because the two men who stood to lose the most if the Knights failed were Ganguly and Khan. While Ganguly’s iconic image in Kolkata had taken a beating after a failed Season Two, Khan, for the first time was villain, not an image he aims to cultivate.

The author is brilliant in his team meeting descriptions, and documentation of conspiracies to overthrow Ganguly (Gautam Sarkar). A Ganguly fan will rejoice at the cunning ways in which he foils every attempt to get at him!

The book could have scored more by being more nuanced, given that it was written months after the real event. As it stands, it is a good read, but not one that will adorn shelves for a long time. Its aftertaste is much like the IPL, not like that of a fascinating Test match.