A dark, masterful satire plays on death and the media, bringing one of Kerala’s strongest voices to English via Calcutta 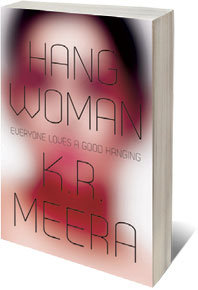 A dark, masterful satire plays on death and the media, bringing one of Kerala’s strongest voices to English via Calcutta

The image that stays long after finishing KR Meera’s The Hangwoman, days after its intricate plot has coalesced into a memory puddle of morbid scenes and fables, is of a young woman’s fingers twisting her dupatta. It is a tentative act, something to do with your hands when you don’t know where to put them. But this particular young woman is not being tentative. She is fashioning a noose. The floral prints and psychedelic colours of her dupatta are looping into a hangwoman’s tool. Her fingers are skilled and her arms are strong, she not only knows how to knot the noose but also how to throw it around a neck.

The hangwoman’s own journey is similar to that of the dupatta , that everyday symbol of feminine modesty. When the story begins, Chetna Mullick is a dutiful daughter, washing her disabled brother’s clothes in their ramshackle home next to the funeral ghats. The men in her family have been in the business of executing death sentences for generations and the family is eagerly awaiting the next hanging. But when her 88-year-old father bargains with the government and demands that his daughter be given his job and a wily, fast-talking television reporter manufactures a news story out of this, Chetna finds herself catapulted into a frenzy of publicity.

Meera, one of the strongest voices in contemporary Malayalam literature, has won awards for her fiction as well as screenwriting. Her short story collection Yellow is the Colour of Longing (2011) was translated into English, and has written 11 other books. But the earliest recognition of her writing was an award for her investigative series on Kerala’s women laborers. Even as her writing career shape-shifts, and her words move from newspapers to fiction to television, Meera continues to be drawn to investigating women.

There is immense playfulness, albeit of the dark kind, in the way Meera portrays Chetna’s metamorphosis. As we wait for the hanging, Chetna grows into her own powers. She delves eagerly into the stories of her ancestors, the hangmen who perfected the art and craft of killing by rope. She learns about ropes, about the vertebrae of the neck, about testing the weight of the body. She becomes enamoured of death. She becomes media-savvy.

After a contract for exclusive access is signed with CNC television, Chetna sits day after day in front of a television camera to be interviewed by Sanjeev Kumar Mitra, the ambitious reporter who makes a celebrity out of her. The noose is in the news, and in turn, the news becomes a noose. The television camera follows her to the jail where she goes to receive her appointment order and to inspect the big iron box in which ‘ropes that were a century old lay coiled like enormous black cobras preparing to lay eggs’. The TRP ratings go through the roof, and the reporter wants to marry Chetna.

The edges of this satire are knife-sharp. Meera plays with the reader’s anticipation masterfully while also forcing us to recognise how hollow such victories are. One day Chetna refuses to go to the television studio, asking her father to go instead. He persuades her:

‘I am old. They want young people. And besides, you are the symbol of women’s strength and self-respect, for India and the whole world.’

He was flushed with emotion.

‘I’ll give you one tight slap, mind you! Talking back to me, eh? Just see what happens when we hear women talk back around here—’ He raised his hand to hit me. Scared, I jumped out of the way.

But Meera’s genius is not just in manipulating the irony of the hangwoman’s power for predictable laughs and thrills. She takes the novel to a trickier, darker place. We all know not to trust power and publicity. But what about love? When Sanjeev Kumar Mitra and Chetna romance in the murky, decaying streets, the narrative of the novel twists inward. The more the narrator takes us into her confidence, the less we understand her. This interior world of secret intentions and unrequited desires is as treacherous as the world of TRP ratings and SMS polls. And the city wraps around hangwoman and reporter with its mysteries; a rickshaw puller pedalling the lovers through a monsoon night turns out to be the heir of Tipu Sultan, ancestors start to emerge from the shadows.

This is where the novel begins to falter. The Chetna of the first half of the story is a complicated woman, whose fierceness is tempered by insecurities and longings. In the second half, however, Chetna appears more like an all-knowing oracle. The story drags here, interrupting itself with other stories as Chetna remembers her ancestors and pieces together her own family history and how it intersected with the history of Calcutta, from Atmaram Mullick who put to death hundreds of British soldiers, as the chief executioner of Nawab Mir Qasim, to Ramnatha Grddha Mullick, a poet and musician who placed the noose around the neck of the woman he loved. In itself, these mini-histories are fascinating and well- researched, but they are woven into the main story with utter recklessness. They dangle precariously from the thread of Chetna’s story. Eventually, the narrator simply turns into a vehicle for these memories. Perhaps this is the pitfall of reading in one sitting a novel first published in serial form, over 52 weeks. The story takes on a loopiness, a repetitive quality which might be forgiven by a reader taking in one chapter once a week—but not by one who can skip pages. When the narrative recovers sufficiently to twist out a new dilemma, gasping its way to the end, the resolution which would have seemed bold a 100 pages ago, ends up tasting melodramatic.

Yet, even this second half of the novel is extremely atmospheric. The grimness that hangs over the novel deepens here and Meera turns the entire city into a haunted house. With surprise, we read in her acknowledgements that she has never lived in Calcutta. During her research, she learned about its women:

This story passed through multiple filters before it appeared in its English incarnation. Translator J Devika has captured the way Malayalam strings together metaphors, describing an object or moment or mood using multiple images. But there are places where the wheels of translation squeak aloud. For instance, when Chetna’s father takes her to visit the gallows for the first time, she looks at the lever that will shift the platform on which the condemned man stands.

‘The iron rod which had borne the touch of my ancestors for many, many centuries. They had made sure that their mission continued through centuries—whenever one retired and proceeded towards death, he would dedicate to the world another soul who would continue to carry out justice. And here I was, finally, deputed to continue that mission. And what a mission, I sorrowed.’

The word ‘sorrowed’ brings us up short at the end of that brooding moment. Almost too literal, too scrupulous, the word, though grammatically blameless, tosses the gravitas of the moment into the air. What does ‘sorrowed’ do that ‘grieved’ or ‘mourned’ does not? The iron lever is rusty, Chetna finds when she pulls it to practice. It does not budge. The moment passes, for the narrator and the reader.