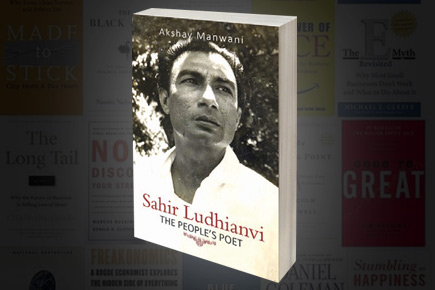 I am a Sahir fan. And I understand Akshay Manwani’s sentiment when, in his introduction to Sahir Ludhianvi: The People’s Poet, he explains why he chose to write a book about the poet: ‘I felt compelled to repay my debts to a man who, through his songs… has given me innumerable moments of joy.’ That joy reflects in Manwani’s book. In it, he is able to bring out both Sahir the lyricist and the person, which is important because, as Manwani says, it is impossible to reach out to one without the other.

Born Abdul Hayee on 8 March 1921 in Ludhiana, Punjab, the young poet adopted his pen name ‘Sahir’ from a poem by Iqbal on another great poet of the late nineteenth century, Daag Dehalvi. Throughout his work as a poet and lyricist, Abdul Hayee lived up to his pen-name, which means ‘magician’.

Sahir had a rough childhood. His mother, the eleventh wife of a decadent landlord, was forced to leave her husband, fleeing his dissolute ways. She was very protective of her son as his father threatened to snatch him away from her several times. As a result, Sahir’s childhood, Manwani writes, was marked with fear and anxiety and ‘the uncertainty of those years remained bitter memories Sahir carried within himself all his life.’

These experiences brought forth some immortal lines from Sahir’s pen: ‘Duniya ne tajurubaat-o-havaadis ki shakl mein / Jo kuch mujhe diya hai, lauta raha hun main.’ (Whatever the world has given me by way of experience and accident, I return it now.)

Manwani’s book is full of anecdotes about Sahir’s life and traces the poet’s journey from a bitter child to one of Hindi Cinema’s greatest lyricists. Through other resource material, available mostly in Urdu, and through interviews with Sahir’s friends, both from cinema and non- cinema backgrounds, Manwani is able to create a powerful sketch of the poet who gave Hindi cinema some of its most memorable songs.

After all, who else had the gumption to write Tajmahal, a poem in which, Manwani writes, ‘Sahir decries the vanity of an emperor in using the wealth at his disposal to create a structure that will forever mock the love of ordinary people’? ‘Ek shahenshah ne daulat ka sahaara lekar / Hum gareebon ki mohabbat ka udaaya hai mazaak.’ (An emperor, using his wealth, has mocked the love of us impoverished souls.)

Sahir came to Bombay in early 1946. The city had by then become a major centre of progressive writers, most of whom, as Manwani points out, had established links with the film industry or journalism. It was here that Sahir came in touch with writers and poets like Jan Nisar Akhtar, Krishan Chander, Kaifi Azmi, Ali Sardar Jafri and others.

Sahir arrived in Bombay at a time when the country was going through tough times. The shadow of Partition loomed large. Sahir and his friends mobilised themselves to put up a fight against communalism. But the division of the country was inevitable. And it brought with it a cycle of bloodshed. Circumstances forced Sahir to shift to Lahore, which had become a part of Pakistan. But, Manwani quotes Sahir’s friend Prakash Pandit, ‘He was unable to bear the separation of friends who belonged to the Hindu and Sikh communities and among whom he had spent all his life.’

Sahir returned to Delhi and then to his final destination, Bombay, where the film industry gave him a hard time for a while and then accepted him wholeheartedly.

It is through his lyrics that he finally gave vent to the anguish he had experienced during Partition: ‘Tu Hindu banega na Musalmaan banega / Insaan ki aulaad hai, insaan banega.’ (You will become neither a Hindu nor a Muslim / You are the child of a humans; you will become human.)

What is impressive about Manwani’s book is that he is able to divide Sahir’s life into compartments, some of which are essential milestones in the poet’s journey. He writes about how Sahir was able to meet the legendary music director SD Burman and how his poetry changed the language of film songs. There is a chapter on the film Pyaasa, which immortalised Sahir as a people’s poet. The book also evocatively tells the story of Sahir’s and Amrita Pritam’s ‘silent’ love story.

In all, Manwani’s book captures Sahir’s life in its essence, and tells the story of how a poet changed the idiom of Hindi cinema and forced the Hindi film industry to accept, in Gulzar’s words, that a lyricist could succeed entirely on his own.