A copy of the Quran, parts of which were written by Mughal ruler Aurangzeb, will soon be auctioned in Germany. 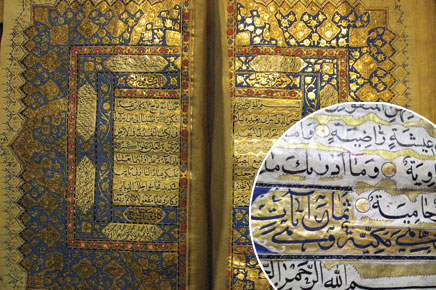 A copy of the Quran, parts of which were written by Mughal ruler Aurangzeb, will soon be auctioned in Germany.


While the international media’s attention was transfixed on an obscure reverend from an obscure church in Florida for his nutcase idea to burn the Quran, you probably missed the far more interesting Quran-related news that broke around the same time. A 300-year-old manuscript of Islam’s holy book, one with antecedents, is scheduled to be auctioned next month in the German city of Bamberg.

From the collection of the last reigning Mughal Emperor, Bahadur Shah Zafar, the manuscript, according to the Seboek Auction House, is ‘a rare copy of the Quran with lavish golden insets, written in parts by the Emperor Aurangzeb’. Written on handcrafted paper made from rice and other natural materials, the ink used for the purpose is said to have been made from precious and semi-precious stones such as ruby, garnet and lapis lazuli.

Dating back to the time of the building of the Taj Mahal, the rare copy has several passages written by Shah Jahan’s son Aurangzeb himself. He is said to have entrusted the best calligraphers of the Emperor’s palace with the penwork of this copy.

The great-great-grandfather of the previous owner (the auction house being the current owner), who prefers to remains anonymous, was reportedly the governor of Awadh who served the last Mughal. In his final days as Emperor, Bahadur Shah Zafar is said to have presented his confidants with precious gifts as an expression of his gratitude. According to a statement released by the auction house, ‘The governor chose this rare manuscript from the Palace Library as his personal present, which also bears his own signature.’

The previous owner is believed to have bequeathed the manuscript to the German auction house as an acknowledgment of close connections he built with the country during his university days. Auctioneer Stefan Seboek expects to receive one of their highest bids ever

for the manuscript at the arts and antiques auction. A comparable manuscript—a 400-year-old miniature Quran—was sold for $10 million in 2006 to the Sultan of Brunei.