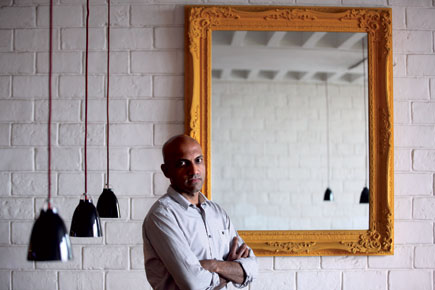 
It’s hard to believe the stories in I Am An Executioner came from the mind of the soft-spoken Rajesh Parameswaran, stories that often slide swiftly, vertiginously between the playful and the sinister—the sudden love and accidental savagery of Ming the Bengal tiger; the executioner who seduces his new wife with details about the prisoners he will soon hang to death. Parameswaran’s writing has been subject to dismissive descriptors like ‘diaspora lit’. He says he doesn’t really care about such labels, and doesn’t resist them either. Elsewhere, he has said he is as much writing against the standard immigrant narrative as the standard tiger narrative. Asked to describe himself, the first word that comes to his mind is ‘carburettor’.

Q How did you begin writing?

A It took me a long time to start writing. I’d been interested in it since studying English Literature in college, but I tried a number of different careers along the way and it finally became clear that I had to… sit down and really give it a try. I think I was in law school at the time that I had this… I guess, kind of panic, like it’s now or never. So I started writing stories, and it went from there.

Q How is being a full-time writer different?

A I like it better. But there may be a time the book advance and fellowships will dry up and I’ll have to do something else as well, and I’ll embrace that as an opportunity to refresh my fund of experience. But it’s nice to have the time. Once you get used to [it], there’s a big temptation to squander [it]. When you only have a couple of days a week or an afternoon here or there, sometimes it helps you focus. But I’m very lucky to be able to write full-time and I wouldn’t give that up. It’s nice not to have to go to an office in the morning.

A I write all over the place. I’ve often had roommates or been couch surfing in the years I was freelancing and trying to write, so I got used to leaving the house and going to coffee shops or libraries, and even to this day… I have a really generous fellowship, where they give me an office and a big computer, but I still find myself going to noisy coffee shops with my old laptop or notebook. Somehow the buzz and the low-level distraction help me focus. When things are too quiet, I find myself searching [for] a distraction, but if there’s already a little noise in the background, sometimes it’s easier to focus.

Q How has your writing changed in the 10 years since you began writing seriously?

A I’m still in the process of seeing how it has changed. Each time I sit down, every day is different. Every day, my writing changes. Looking at the collection, I can sort of see my process, or the phases I went through over the course of writing the book. I think there was a phase when I was trying to master the form, seeing whether I could do it, and then there was a phase when I felt constrained and was trying to break apart the form in some way or another. I don’t know if I feel either of those constraints now, writing a novel. I feel sort of fluid and free and just trying to write something that feels compelling to me.

Q How else is writing a novel different?

A One of the challenges of writing a short story is there is really very little margin. Everything has to be to a purpose. If there is a line or a paragraph that is not part of the machinery of the narrative, there’s no space for it, typically, in a short story. Whereas a novel is a much bigger tapestry and you can have different worlds within the world, you can take digressions and then come back to the main path. That has been very freeing and exciting. It’s nice to be able to stretch, but then it becomes very challenging to bring it back to some coherence, and I think that’s where I am—realising that maybe I unlearned the lessons of the short story too quickly or was too eager to run away from them, and now I’m trying to bring it together in a tighter weave.

Q When you first set out to write, did you intend to write short stories?

A Yes, I did. It wasn’t like these were novels that just ended up being 30 pages long. I had a lot of different ideas, [not] one big story that I wanted to tell, so the short story seemed like the right form.

Q Do you see the short story as a sort of testing ground for fiction writers?

A No. I think that’s a little bit of a dismissive way to think about it. There are so many writers whose careers are [the short story]—George Saunders, Lydia Davis, Flannery O’Connor, Alice Munro. I think it’s a great form in and of itself. I still will write short stories. It takes less time to fail at a short story than it does at a novel. So if you want to fail a lot and fail quickly, as they say, then you can do that with a short story in quick succession. To me, that was reassuring. I did end up spending years and years at it, but I think the idea of spending six years on a novel and failing, at the time was, to be honest, more than I was willing to risk.

Q Are there any short story writers who you particularly admire?

A So many. Herman Melville wrote some long stories like Bartleby, The Scrivener and Beneto Cereno that are some of my favourites. And [Franz] Kafka, [F Scott] Fitzgerald and [Edgar Allen] Poe. There are a lot of living writers as well, whose collections I really have enjoyed, like Lorrie Moore, or Alexander Hemon.

Q How does reading influence your writing?

A When I’m writing, I’m usually not thinking about influences; I’m just hoping it’s all sort of there, absorbed. But there are times when I’m reading something and I’m so excited by [it] that it will instantly instigate some kind of written response. There are a couple of stories in the book that are really directly—at least in my mind—in dialogue with other works of fiction. In the story Four Rajeshes, there’s a sort of Bartleby-esque character, and I was trying to process Bartleby in the course of writing that story. And in the footnotes to Elephants in Captivity, I was basically just cribbing from [Vladimir] Nabakov’s endnotes in Pale Fire.

Q In your stories, you speak through animals, out of photographs, from the edge of the galaxy—is this experimentation with form premeditated, or does it just happen?

A I think more the latter. When I was writing the collection, I was determined to feel free to start afresh with each story; I didn’t want to feel constrained to tie all the stories together in some very obvious way, through recurring characters or settings. I just wanted each story to be its own world—whatever happened to be moving me at the time—and I wanted to be free to try new things, but I wasn’t doing new things just for the sake of doing [them]. I was just really following my intuitions. Some days I would feel like writing about tigers, and some days I would feel like writing about people.

Q How does your perspective on your work shift between the writing of it and when you read it or are asked to interpret it?

A I think you go through stages of separation. I have always believed that a book should stand on its own and an author should not get in the way of a reader’s experience of a story. I think what I say is irrelevant. I do it because I want people to know about the book. But I can’t really speak for the book; I want the book to speak for itself. I feel like that’s why I wrote it. As we’re chatting here, I can only say it worse than the book [does]. I’m sort of mis-paraphrasing Robert Frost. I heard that, in an interview, somebody asked him, “So what does this poem mean?” and he responded, “So you want me to say it worse?”

Q Do you think it’s counterproductive for writers to speak about their work?

A You know, I used to think I would be the kind of writer who refuses to do any publicity and doesn’t do readings…I thought there was some real integrity in that. And I still believe that, but honestly, after 10 years of sitting in my apartment, it’s nice to get out. At some level, it’s really painful, and I don’t feel like I can really do justice to it, and I’m sort of making it up as I go along. I don’t really remember and I don’t really know if I even knew at the time what I was thinking, but I have to think up something to say.

Q What do you do to combat writer’s block?