That Bird in the Bush 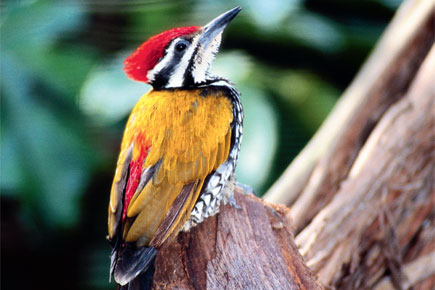 
M Krishnan (1912-1996) was a well-known naturalist and wildlife photographer. He used to write a newspaper column called ‘Country Notebook’ that appeared in The Statesman without a break for 46 years. In what has obviously been a labour of love, Shanti and Ashish Chandola have put together a selection of Krishnan’s writings on birds during this period.

The book, to my mind, has two qualities of particular interest. First, it offers a fresh way of looking at very common birds, where Krishnan points out details that we’ve seen but failed to register. Second, it enables one to compare the status of many species several decades ago with their situation today.

We’ve all seen groups of babblers agitating and making a ruckus. How many of us have bothered looking at what they are agitated about? Is it an owl or a cat? Why do they do this? Is it another group in the area? The latest thinking about ‘mobbing’ behaviour is that it signals to the predator that it has been seen: we know where you are, and what’s more, we’ve made sure everyone else in the neighbourhood knows it as well—why don’t you go away and bother somebody else instead? Babblers live in close family groups and hold group territories, which they defend against other groups in the area.

How do you keep a parakeet from getting bored? You put things in its cage for it to play with.

Did you know that the ‘Common’ Kingfisher is possibly the brightest-coloured bird in England, whereas it doesn’t qualify for that honour even in its own tribe of kingfishers here? We have lots of very brightly coloured kingfishers here, of which the undoubted gem is the tiny Dwarf Kingfisher (or Three-Toed Kingfisher, as it was known before British birdwatchers changed India’s popular bird names not too long ago in an astonishing act of colonial hubris). I didn’t know that the Roller has such a bizarre courtship display, even though the bird is still extremely common.

There are observations to be made about some of the birds Krishnan talks about seeing. The Goldenbacked Woodpecker is still, luckily, very common, and can be spotted in gardens in the heart of Chennai. The Sarus Crane, once ubiquitous all over the wetlands of north India, has now become scarce with the destruction of these wetlands and possibly the rampant use of pesticides. Vultures have become so rare that seeing one has become an event to be remarked on, even in areas where they were abundant just a decade ago.

Waterhens are seldom seen around ponds and lakes these days; catapults and air rifles have decimated them. This is also true of a lot of garden birds. I suspect that the advent of television has been beneficial to bird preservation: young people tend to stay glued to their idiot boxes in the evenings nowadays, which is better than their going out to kill birds.

Krishnan also eulogises birds that sing. Shamas, drongos, treepie, doves, all come in for his attention. Why do they sing? Zoologists have always searched for explanations. Krishnan feels they do it because they enjoy it.

I particularly empathise with his description of a peacock’s call: ‘Each morning and evening they pollute the air with their harsh, piercing calls.’ Reminiscent of politicians, I would think. Is that why it was made India’s national bird?

Many of Krishnan’s articles end rather abruptly, making one wish for more detail. However, given that the original format is that of a short newspaper column, this is perhaps only to be expected. The editors have added endnotes that make it easy for the reader to understand who the personalities being referred to in the text are.

The articles are filled with humour, though some of the words have one reaching for a dictionary. There are also plenty of literary allusions, most of which escaped me.

This is not a book you should read from cover to cover. It is best savoured bit by bit, preferably while you sit on your balcony or terrace and look at the birds that have been written about. If you have the slightest interest in birds, I would recommend it.