Stripped to the Core

Is writing a memoir worth the sacrifice, the self-shaming, the self-aggrandising? 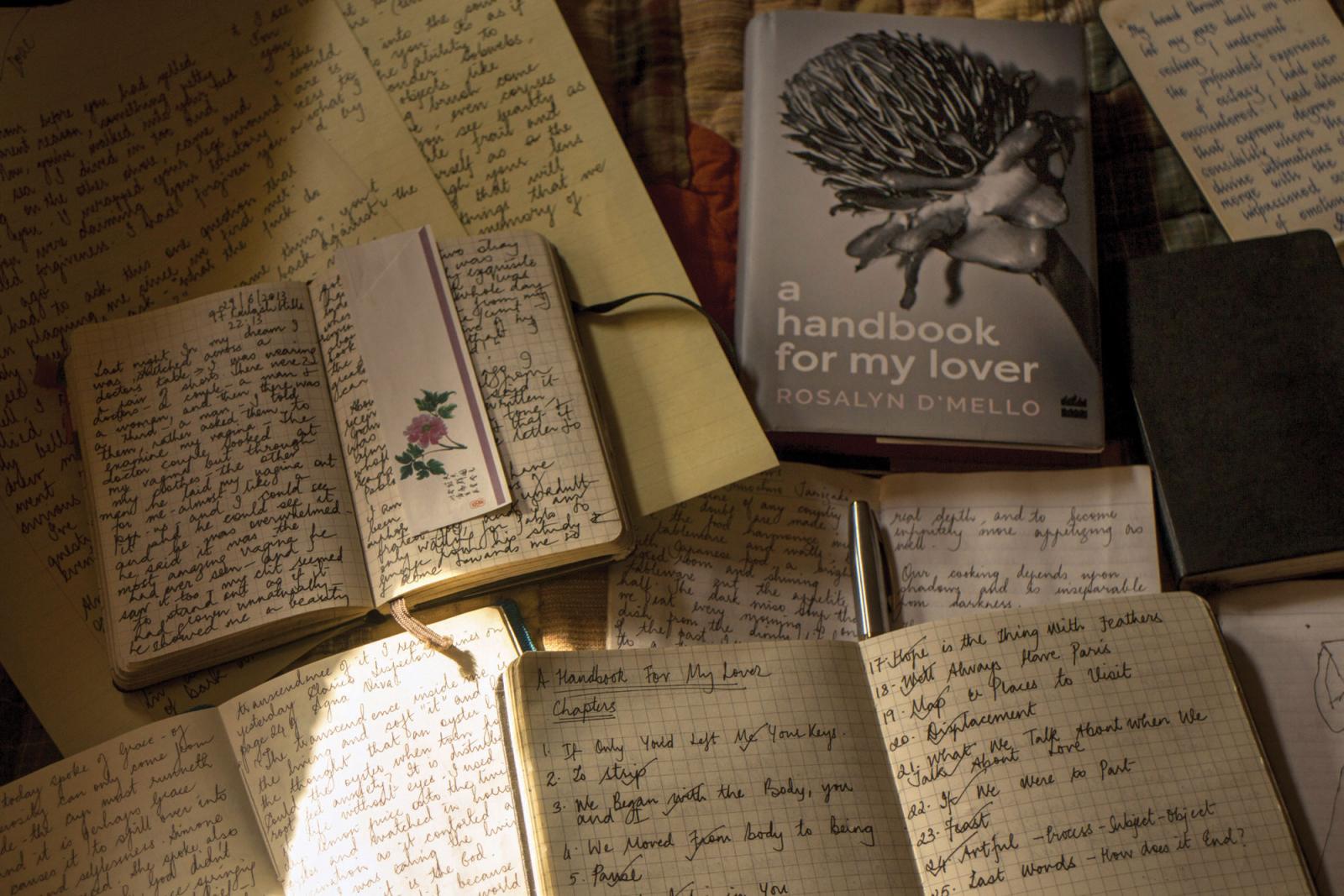 All reading is a form of literary and literal stalking. Never before had I felt this as strongly as when I found myself rummaging through my stationery drawers in search of different coloured highlighters. At long last the book whose delivery I’d been breathlessly anticipating was on my desk, waiting to be unravelled. On the crisp white cover was a photograph of a notebook held gapingly exposed by the tail end of a black pen. The cursively handwritten page is speckled by the interstices between light and shadow. To its left is an ashtray, at its back a ceramic bowl with a spoon resting upon more filled pages. Above the image in a sci-fi green is the book’s title, I Love Dick, below which is the author’s name, Chris Kraus. The photograph is titled ‘Treilles, 1996’ and is credited to Jean Baudrillard, the iconic French sociologist, philosopher, and cultural theorist. The image freezes a moment in time when Baudrillard, the writer, probably stepped out from his chair in some apartment in Treilles, France, took a few steps back and perhaps found himself captivated by the mis-en-scene that had led to this freshly produced creation. The writing is illegible. It has been deemed more as a signifier of the now complete process of conception and execution. In a seemingly nondescript way, it perfectly encapsulates the missionary zeal behind Kraus’ I Love Dick, what poet Eileen Myles refers to in her foreword as a ‘cunty exegesis’; the notion of the document, of the binary between that which is meant to be read and that which exists purely as subtext.

Flitting between third person and first person and mediating between genres, Kraus’ book in its entirety is the culmination of her obsession with Dick, a cultural theorist she encounters over dinner with her semiotician husband, Sylvere, and with whom, she is convinced, she has experienced ‘a conceptual fuck’. Over 261 pages she places herself centre stage in her personally constructed theatre of shame, performing the seminal role of the woman who willingly debases herself as she sinks further and further into the mire of her apparent self-destruction, eventually abandoning husband and home in an attempt to reclaim her identity as a singular, self-possessed entity. I used three highlighters to tear into this irreverent book—orange, pink and green. Then I used a pencil to reiterate for myself certain epic portions of its flesh both to write into its fabric and to scribble over its terrain. It was the only way I could imagine absorbing everything, of eating the words, so to speak, devouring the pages and spitting nothing out. For me, this violent method of reading had found validation months ago in an essay I’d read by Tim Parks titled ‘A Weapon for Readers’, in which he spoke of the predatory nature of a pen suspended over a text. ‘Like a hawk over a field, it is on the lookout for something vulnerable. Then it is a pleasure to swoop and skewer the victim with the nib’s sharp point. The mere fact of holding the hand poised for action changes our attitude to the text. We are no longer passive consumers of a monologue but active participants in a dialogue.’

Kraus makes a weapon out of her obsession for Dick. She brandishes her lust and her desire in numerous letters which, at first, she directs to him but never delivers, until finally she has amassed them all and in a moment of sheer vulnerability, deposits the grand anthology in his unsure, uncertain, and unperturbed hands. The letters reflect her descent into passion and the simultaneous embrace of the politics of irrepressibility. They engender a form of literal stalking, where Kraus actively pursues Dick, tracing his movements, shadowing his thoughts. And they embody a literary stalking, a frenetic flipping through innumerable works of art and literature, films and essays. Somewhere mid- way, she speaks of her late friend and writer David Rattray, who was a 26-year-old American junkie when he started translating Antonin Artaud: ‘He’d read Artaud in French at Dartmouth College, but in 1957, living on his own in Paris, he decided to become him. At the old Bibliotheque Nationale in Paris, the cataloging system held a list of every book checked out by every reader. Artaud was fairly freshly dead. And isn’t scholarship just a stalking of the dead by people who’re too stoned or scared to chase live bait? That year David Rattray read every single book checked out by Antonin Artaud.’

For the memoirist, few things inspire as much fear and repulsion as the vacant expanse of a blank page. Where to begin and how to proceed are the two most daunting questions at hand. Also, how to transcribe the enormity of what lies tucked between the dog-eared edges of the soul? How to universalise the personal treatise? How to encapsulate the wealth of literary references one has amalgamated over the course of the meditative experiment when one is essentially speaking of the still-bleeding wound, the ever-forming scab? If writing is a form of communicating with the ghosts of the self, can it also entail a dialoguing with the spectres that haunt the literary imagination?

When I set out to write my debut memoir, A Handbook For My Lover, I had little idea of the immensity of my undertaking. It was originally intended to be a cheeky document attesting to the complexity of the strange relationship I had inadvertently stumbled into. (To stumble is to either falter involuntarily or to encounter as a matter of chance. It connotes something of an accident, in this case an un-premeditated affair.) But in order to write of the act of stumbling into, I found I had to descend into the very depths of my vulnerability, for how otherwise can one reveal without first unravelling, stripping off layers and layers until you come undone, until what remains is an unholy nakedness, a messy spectacle of language and longing?

To alleviate the stress caused by the imagined horrors of the blank page, I kept notebooks instead. I didn’t write as much as bookend experiences—scraps from conversations, cruel retorts exchanged in the heat of a full-fledged fight, deferred replies to questions I didn’t have answers to in many tongue-tied moments, doodle-like memorials to lust-driven mornings, anecdotes from evenings fuelled by the peatiness of single malt. What strung these together, however fallibly and loosely, across diaries and notebooks, were the excerpts from my more literary exploits, the hand-me-downs from writers dead and alive whose works I would read and re-read and then reimagine to suit the narrative I was constructing out of thin air. There was little logic to how I came to be introduced to certain texts. Often one writer led me to another, one train of thought to that of another, until I formed conceptual constellations. I stalked the writers I had chosen from one book to another, then sought out their alliances and stalked them too. Then I wrote into their books, along the margins, in the undersides of sentences, in the spaces between words.

‘When the form’s in place, everything within it can be pure feeling,’ Kraus writes, referencing a quote by Arnold Schoenberg. I always knew my book would be embedded in the epistolary tradition, one of the earliest iterations of what would eventually be called the novel. The first-person narrative allowed an immediacy that an omniscient narrator couldn’t affect. I wanted to arouse my reader. I wanted my reader to feel privileged. I wanted my reader to know for certain that he or she is a substitute for a specific addressee, the unintended recipient of my chronicle. I was driven by an irrational need to surrender myself, to exhibit all symptoms of vulnerability, to have the body quiver and to know and yet not know whether this supplication at the lips of my reader will lead to subsequent devouring. It was like stripping (and to strip one must wear one’s sins like clothes). I wanted my letters to be self-contained, to have as constituents the moistness of liquid heat. I wanted them to be residual. I wanted them to have an aftertaste that is so prolonged and manifest, it sticks to your tongue. I wanted you, my reader, to meet me halfway, to have your mouth accept the cupping of mine.

He, in fact the intended recipient, has yet to read the handbook. He is real, he is flesh and bones, skull and soul. He, whom I have watched age, from 53 to 60, has ‘read enough to make him feel uncomfortable’. He won’t commit to reading more but makes promises all the time. Did he thus defeat the purpose of my treatise? In resisting the act of reading it, has he ensured my enterprise was left incomplete?

He jokes now and then about a sequel. I quash these entreaties, nip them in the bud. I am too spent. I know I don’t have it in me to take centre stage once again. The exposure has left my skin cold. Now I seem to seek the comfort of cloaks, the mysteries of self-erasure. I know I will dabble once more in irrepressibility, but not at the expense of my lust. The next book will also be a collection of letters, but to dead people and fictional characters, none of who has the physical dexterity and temerity to respond because of the state of not being quite alive.

Was it worth the sacrifice? Was it worth the self-shaming, the self-aggrandising, the wilful confession of my powerlessness in the face of love? Did I really claim agency? Did I successfully confuse fiction for fact, reality for make-believe?

In writing this memoir, I exposed myself too elaborately. I allowed myself to be irrepressible. I stripped to my almost core, revealing more than I should have, even delighting in the revelation. I did not seek repentance for the many sins of which I wrote. I refused to call myself a sinner. I challenged the very conception of sin.

I revelled in my shame, made a theatre of its exhibition. I hung my dirty laundry out to dry in the town square. I sought ecstasy in pleasure. I took great pride in my indulgences. I did not ask for forgiveness. I demanded only to be read.

I corrupted myself with ambition. I lived beyond my means. I trespassed into forbidden territory, partook of fruit I stole myself from orchards that did not belong to me. I gave too much of myself, more than there was to share. I grasped the immensity of my insignificance but continued to live as though my words were somehow exigent to the cause of mankind’s redemption, somehow urgent to the mission of transcendence.

I lived and loved without guilt. I succumbed to my passions. I survived my history of lust. I subverted the truth. I idealised my body. I dared to want more than was my allotted share.

I let myself happen.

(Rosalyn D’Mello is the author of A Handbook for my Lover, HarperCollins India, 244 pages, Rs 499)