Even less than two weeks in Kenya’s stunning wilderness makes for a coffee table book and a case for conservation. Could we expect anything less from India’s most eloquent tiger watcher? 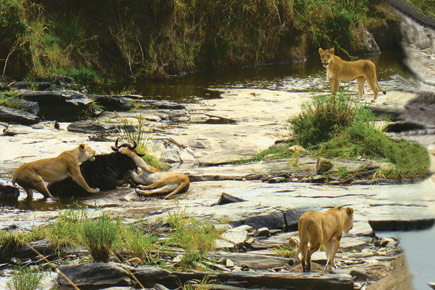 A mere 12 days in Kenya makes for a book and a case for conservation. Could we expect anything less from India’s most eloquent tiger watcher?


If you have read Karl Amman’s great pictorial works on Masai Mara, you may not bother flipping through Valmik Thapar’s diary entries. But ‘after thirty-three years of tiger-watching’, Thapar knows better than trying an Ammann in 12 days. His brief is different. So even if wife Sanjana (of Prithvi theatre fame) believed the decision to write this book ‘was based more on arrogance than expertise’, Thapar exploits his limited scope to showcase the abundance of wildlife experience that Kenya has to offer in less than two weeks.

Primarily meant for Indian readers, this book works at different levels. It promotes Masai Mara and Kenya as the ultimate wildlife tourism destination, where the terrain and vegetation allow sighting opportunities unimaginable even in the best of India’s dry forests like Ranthambore. But while the open landscape prepares the stage, the Kenyan experience would not have been magical without so many characters—the sheer volume of the wildlife.

The book appreciates the Kenyan government for its efforts and innovations to protect its natural heritage against severe odds, while asking why the Indian establishment does not learn from the Kenyan experience or initiate an idea-expertise exchange programme.

The daily entries interspersed with photographs gush with excitement. During his ten days at Masai Mara, the seasoned author of 16 books is often ‘left for words’ or just ‘dumbstruck’. So the narrative packs an abundance of exclamatory expressions, like ‘That’s Africa!’ or ‘Such richness!’ to drive the excitement home. At times, Thapar is almost breathless: ‘When the sun dropped, we left the leopard to find giraffes and elephants in their prehistoric shapes around our jeep. This is a place where you feel that life had originally evolved—where we all evolved. It is so special that senses are continuously filled with visions that captivate you.’

More often, the visual magic of the Mara landscape and its active wildlife silence the most eloquent of India’s tiger-watchers. Little wonder that ‘What a sight!’ or its close variations are the most frequent expressions in Thapar’s entries.

Thapar is much more his usual self at conservationist Kuki Gallmann’s impeccably maintained private conservancy, ruminating how someone equally passionate in India— say, former conservator Fateh Singh Rathore—would have protected Ranthambore had he owned the reserve, and why it is not possible in India to allow private management of forests.

Thapar’s fingers, though, click perfectly steady throughout this emotional journey. The photographs that accompany the brief entries tell each story effortlessly. He and his companion, Amita Chhabra, capture most of the action moments they were privileged to witness and build a few amazing sequences. Also, Thapar’s eye for detail and his interest in the larger theatre of the wild arrest many frames often missed by average tourists hungry for big animals.

An African Diary may make even someone with a fleeting interest in wildlife long to visit Kenya. But for those interested in conservation, the truly inspirational segment is the afterword by Gallmann, who converted her husband’s large cattle ranch into Kenya’s biggest private conservancy. In her simple, earthy style, the Italian-born poet, who made Kenya her home almost four decades back, tells her own story and sums up Kenya’s conservation dynamics—its positives and the challenges it faces. These seven pages are a must-read for those unfamiliar with her fascinating biography I Dreamed of Africa (or the Kim Basinger film based on it).

Not too many in India are familiar with either Gallmann or Ammann to weigh Thapar’s book for what it packs or what it lacks. But, fortunately, it also stands out as a coffee table book. It may just convert a few readers (flippers) for conservation.