Andre Agassi casts out the demons of his past by writing about his cursed tryst with the sport that made him an icon. 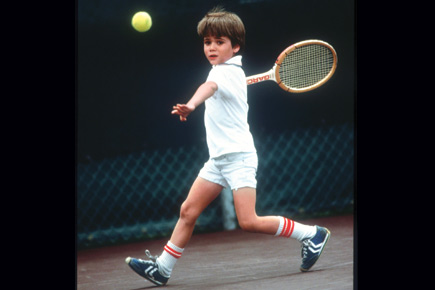 Agassi casts out the demons of his past by writing about his tryst with the sport that made him an icon.


Agassi casts out the demons of his past by writing about his tryst with the sport that made him an icon.

Agassi casts out the demons of his past by writing about his tryst with the sport that made him an icon.

Open is one of the most disturbing books I have read. It is a new-age sports autobiography, the first perhaps of a genre that looks at sport itself with a new lens, considerably more critical than anything written before. As a passionate sports fan, it is a problematic read for it undermines the very reasons for which we watch and love sport. It portrays one of my all-time favourite icons as a vulnerable, un-empowered individual, who leads a life he detests. It is an expose of the sporting underbelly, the layer below the glamour and glitz, and the reality is extremely hard to digest. It is also a treatise on human frailty, what familial pressures can do to children and how an unpleasant childhood can continue to haunt an individual, however successful he is, for life. In sum, it is dark, negative and an uninspiring read.

It is evident that Agassi took to tennis not by choice. Rather, he had no option but to hit 2,500 balls a day under the watchful eye of his draconian father. Even a five-minute nature break wasn’t allowed. Tennis, obviously, is a curse Agassi was saddled with from age seven.

His father’s life as an immigrant in the US, after having spent many treacherous years in Iran, does cast some light on why he wanted his son to dominate the world. A deep craving for money and fame made Mike Agassi a hard taskmaster. That it is an obsession with him is evident when he scribbles just before going in for a surgery that Andre should have attacked Sampras more in one of the many finals they played against each other.

Except for a brief passage in which Agassi talks of his fondness for Mandela, the book is only about tennis. There are detailed description of matches and tournaments, as if there is little to his life than tennis. In fact, his rather uneventful life turns colourful only when he starts dating Stefanie Graf. The way he pursued and eventually married her is one of the best parts of the book, giving us a glimpse of the real Agassi. When Stefanie doesn’t return his calls or ignores his flowers, he is on the verge of a breakdown. For us Agassi fans, it is impossible to picture him phone in hand, waiting for that one coveted call from his lady love, one that hardly came at the start of their courtship.

Descriptions of some of his enthralling matches are indeed cutting edge, making the reader sit up and take note of what players endure while trying to entertain us. The pain he felt after beating Marcos Baghdatis in his last US Open or the torture his body has had to go through over the years conjures a picture that is so very alien to us that at times, it is scary. It also adds to the aura of these icons.

The book also scores for sections on his rivalry with Sampras, his failed relationship with Brooke Christa Shields and his love-hate relationship with Nick Bollitieri. His emphasis on forming a good team proves that behind the creation of a champion is an entire system. Without Brad Gilbert or Darren Cahill or his lifelong friend Gil, Agassi is inconceivable.

The more market-oriented sections deal with his tryst with his hair, which plagued him for years and was central to the creation of an entire generation of Agassi fans. The liberation he felt at getting rid of his hair was no less emphatic than the sensation he felt after winning his first Wimbledon title. That he wore a wig and was on drugs for a while doesn’t make him a cheat for me, for I am more interested in reading about his efforts to regain his self-esteem after he plummeted to 141 in the ATP rankings.

The part fans in India would love to read is his description of Leander Paes. This is how he describes Paes, who he beat en route to his gold in the 1996 Atlanta Olympics: ‘He is a flying jumping bean, a bundle of hyperkinetic energy, with the tour’s quickest hands. Still, he’s never learned to hit a tennis ball. He hits off-speed, hacks, chips, lobs—he’s the Brad of Bombay. Then, behind all his junk, he flies to the net and covers so well that it all seems to work. After an hour, you feel as if he hasn’t hit one ball cleanly—and yet he’s beating you soundly.’

What Open leaves unanswered is why it was written in the first place: what was the necessity of pouring out venom against one’s father in public? Why reveal to millions of fans that you had once taken drugs and hoodwinked your supporters by wearing a wig? Is it Agassi’s way of trying to come out clean, open his mind to the rest of the world? Or are these attempts to make the book market-savvy and ensure it stays a bestseller for months?

It is essential to remember that Agassi is what he is because of his tennis. A 9th grade dropout raising a record $85 million for his foundation is simply inconceivable had it not been for his tennis. We are celebrating him and buying his book because he is a tennis champion, one of the best players of our generation. However cruel his father was, he is living the fame his father wanted him to earn. In that case, why blame a man when you are ultimately drawing on his legacy? Is it an act of hypocrisy or is it simply an attempt to bare all. Open remains closed to these questions.

The other section which is plain mean is his determination to find out how much Sampras paid as tips. That he paid a dollar to the garage boy despite having earned $40 million in his life as prize money is made much of, revealing the deep apathy Agassi nurtured against his arch rival. At the same time, it is of interest to note that he is almost reverential in describing Sampras’ ability to win marquee contests. That Sampras has always held the edge in contests against Agassi clearly comes out in Open.

Ultimately, Open scores because it is truthful, honest and revealing. But if I had a choice, I wouldn’t want to read an autobiography that has the potential of putting me off sport.

Boria Majumdar is a sports historian and cricket commentator.