In this beautiful collection of short stories, where the everyday blends with the supernatural, Janice Pariat tells the story of Shillong and its people 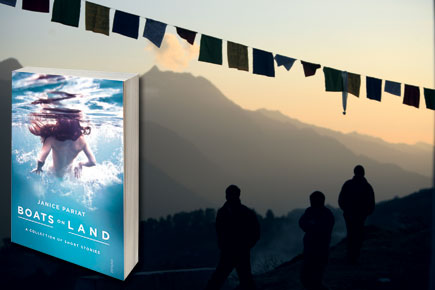 In this beautiful collection of short stories, where the everyday blends with the supernatural, Janice Pariat tells the story of Shillong and its people


One would assume that the short story is considered a poor relation of the novel because it lacks the latter’s ambition. The novel is vast and all-encompassing. It seeks to contain an entire world, time and place. The short story is none of this.

Such a view, however, would not hold against Janice Pariat’s wonderful collection of short stories, Boats on Land. This collection, if anything, can be called a novel about Shillong. Through various vignettes, characters and situations, the author uses their ‘small’ stories to tell the ‘bigger’ story of Shillong.

The stories stretch across a large period of time. They begin sometime in the 1800s, long before Shillong was a part of Meghalaya, or even Assam. Before even the 1857 revolt took place, when a few villagers drove off some bilati (probably Caucasians in Khasi) men by chanting a powerful mantra. The stories move through time, reflecting the land’s shifting concerns—from the fierce bilati men who lorded over it, to the city’s uneasy relationship with dkhars (those who came from beyond the hills in Khasi)—which came to dominate much of Meghalaya’s later history. Until we arrive at the present day, when the youth live in Delhi and other metros, haunted by memories of home in the Northeast.

Through various characters and perspectives, readers learn of how Shillong shaped up—often very differently from the rest of India. As one character remarks just five years after the British left, “Better the white man than these dkhars.”

There are relics of World War II. Like a hostel dormitory that was converted into a military hospital, where a local nurse met a British soldier, where now her granddaughter kisses another girl. There are nights that are blacked out, newspapers used to screen windows, so that Pakistani bombers do not spot settlements. During the day, the roads are cordoned off (because of curfews). In such moments, kites become a real-life metaphor for citizens’ longing for freedom.

The city’s story is also told through the eyes of various people. Through those of a dkhar, a Muslim tailor who, although having grown up in Shillong, is now being forced out. Through those, many years later, of a past member of an insurgency group that sought to drive out ‘outsiders’. He now boasts of how he fought for the rights of other Khasis, but ironically drinks at a bar owned by a dkhar. Through the eyes of a Khasi girl trying to locate the house of an Assamese boy she once loved.

The stories, however sombre in tone, also have their light moments. These are often smaller stories within the stories. For instance, in the story ‘19/87’, about the Muslim tailor who is considering moving out because he no longer feels safe, a garage owner sings the first two lines of Blowin’ in the Wind. He does not remember the rest of the song’s lyrics, and he probably cannot recall its singer either. And just like that, without its being integral to the short story, Pariat introduces Bob Dylan. The singer, as everyone probably knows, has come to assume an iconic status in the city. In another story, a young Khasi girl growing up on a diet of Air Supply and The Beatles meets a boy who asks her, “Have you heard Hendrix?”

Pariat is a wonderful storyteller. She has a soft, nuanced voice, meditative in quality, which evocatively brings out Shillong’s landscape and its people. In one story (‘Echo Words’), gossip and scandal takes over the town when a French anthropologist is suspected of having an affair with a local married man. When the two disappear, they are certain that the man’s wife has killed them. Almost the entire town congregates to dig up an area where they believe the two have been buried. But the land throws up the remains of not the two, but animals, vehicles and ammunition. The British and Americans had buried these items at the end of World War II so that they didn’t fall into the hands of locals. Towards the end of the story, evoking wonderfully how locals are willing to believe anything since nothing really happens here, Pariat writes: ‘The winds here were trapped by the mountains; our words weren’t blown away. Instead they returned to us in strange, distorted echoes, ferocious reflections of ourselves.’

Her stories are not tight and compact like one often expects short stories to be. There are no twists and turns awaiting the final pages. In ‘19/87’, for instance, there is a foreboding that something will occur. Almost every night stones are flung at the door of the tailor’s house. He maintains a low-profile, and when he moves about town, he tries to take a decidedly longer route home to shake off stalkers. The story, however, does not end in his death or his leaving town. It ends with him slightly drunk on the roof of his house, smoking a beedi and thinking of the day gone by.

Khasi words, rich and evocative, find space in the collection, existing on their own, without quotation marks or italicisation to support their legitimacy. Folktales and the supernatural lie alongside the real. Puris or water fairies bewitch men. A man shape-shifts into a tiger, another calculates dreams. Here, a doctor does not treat just patients suffering from coughs and colds. He also treats people possessed by ghosts.

As the stories progress, as time moves, entire localities and people vanish, the music changes, the language shifts from rich Khasi words to those keyed into cellphones, and the concerns of the day alter. But some things remain constant and unmoved. Every time the characters look up towards the sky, or stare into the distance, there is the unmistakable reassurance of the hills, the stars on cold nights, and the flowers arranging themselves at the beginning of spring.