For unlawful carnal knowledge, or even real wisdom, you had better look elsewhere. 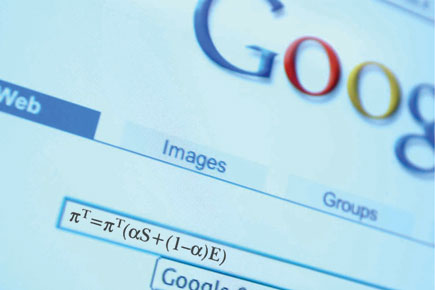 For unlawful carnal knowledge, or even real wisdom, you had better look elsewhere.


Pardon me if I sound more panicky than I should, but there are some creeping realisations that really are creepy. Like what happens when ‘Google’ pastes itself inbetween the words ‘make love’… especially, especially when there are ‘50 ways’ on offer to do so (which, as you can see, the title of this book promises on an attention span of, say, four letters).

Or what happens when, instead of acrobatic antics of Kama Sutric elasticity, you get an unerotic maze of arithmetic complexity (which, to your horror, you are in sudden need of cracking).

Or what happens when you realise that future epitaphs will not be carved in stone, but will be popped onto computer screens by a Google internet search for the deceased (which, even if you hope to have your stiff—the full-body one—flung into outer space, and, like me, would like to wait naively until technology and costs permit, means that you have only so much time to save yourself eternal embarrassment).

Auto e-searchism is not an indulgence one should readily admit to, but having googled myself furtively, my ghast has been flabbered. A stray utterance of mine has tagged itself to my name with feverish felicity on the internet: ‘It [corruption] is literally under every stone you turn’. Now, for an epitaph, online or otherwise, you’d surely agree this sounds a little too creepy for comfort.

But Google just won’t let go of it.

Why so? Something called PageRank, if you please, which goes by what popularly catches on. This is the magic formula that has made Google the world’s top search engine. Invented by Sergey Brin and Larry Page, it’s such a success that some fans want it placed in a maths museum for your children’s children to marvel at. PageRank gets rave reviews because it has placed more information at your fingertips than anyone ever dreamt possible since the caveman performed his first binary bit of data grunting (She, yeah; He, naah).

In the Google Era now, PageRanked knowledge is fast becoming common knowledge. The stuff delivered by the ‘wisdom of crowds’. Google’s famous formula operates on the idea that more minds always outsmart the few. But oddly enough, once you grasp how PageRank works, you can play it to your advantage. And that’s what this book is about. Showing up on Google is all about ‘visibility’, ‘relevance’ and ‘reputation’, it says. This last bit is tricky. You must ensure that you are nicely networked, link by link, on the net. Work out a neat balance between those who send you surfers and those you send surfers to, and you’ll catapult yourself into Google’s searchlights.

As you go along, you may still have to deal with other creeping realisations, though. Like what happens when that silvercoin of success begins to look like a shiny shell of suckerhood (uh-oh). Or what happens when, instead of quintessential quests of Brahma Sutric intensity, you get an electronic matrix where the truth is sought to be superimposed by man’s own sordid devices. Or what happens when wisdom comes to be weighed by a count of clicks.

Unplug yourself awhile, and your memory might hear the soft strains of Simon & Garfunkel’s old lament, ‘Man hears what he wants to hear and disregards the rest…’ We ought to be brave enough and wise enough not to confuse what most know with what we the species know.