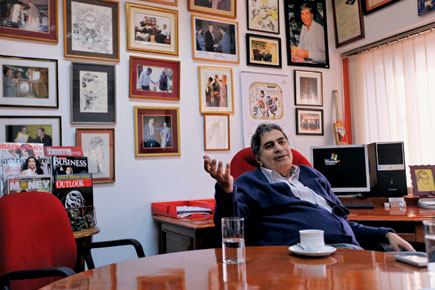 Allow me to state the obvious. Vinod Mehta is one of the last Indian ‘editors’ in the traditional sense of the term—men (unfortunately, it’s been almost entirely a male domain) who stamp their personality on a publication; give it a distinct ideology, voice and flavour, often making the publication indistinguishable—in the reader’s eye— from himself. This is a dying breed across the world: owners today overwhelmingly opt for faceless editors who operate more as product managers, aligned first and foremost with the owners’ commercial and other interests. I neither denounce nor applaud this trend—nor does Vinod, in his new book, Editor Unplugged; it’s a fact of life, to be accepted.

In his first 20 years as editor, Vinod gained a ‘reputation as a card-carrying troublemaker, unable to get on with proprietors’. This was also about all that I knew about him when he offered me a job at a yet-unnamed weekly newsmagazine he was setting up for the Rajan Raheja Group in 1995 (I ended up spending 10 years in what became Outlook). But by then, he was also perhaps a wiser man. The sagest piece of advice I have ever received in my journalistic career came from him. “The first thing you must figure out as an editor,” he told me, “is who the friends of your owners are.” Stay off their backs, and you won’t have to watch yours constantly.

When creating Outlook, he gathered around himself a bunch of young journalists hungry to prove themselves and raise the bar in Indian magazine journalism. Vinod then gave them unprecedented freedom to push the envelope boldly, while maintaining subtle control of the overall direction and tone of the magazine. He could recognise a good idea even before the journalist who had thought of it had finished the first sentence of his or her pitch. And time and again, he startled us by coming up with an entirely fresh angle from which to approach a big news event that seemed to have already been done to death.

If he thought there was a valid story out there, he would go for it, regardless of his own ideology—a mix of pre-Tony Blair British Labour Party values and a genuine commitment to a sort of Nehruvian secularism. When a reporter got into trouble—calls to Vinod from powerful people displeased by a story, or libel suits—he would invariably back his junior. “I see my role as that of the goalkeeper,” he told me once.

On a day-to-day basis, he used the strategy of ‘management by wandering around’, a term popularised by Tom Peters to define the way William Hewlett and David Packard ran their at-one-time exemplary company. I am quite sure Vinod has never heard of Peters, Hewlett or Packard, so this was his own invention. And he added his trademark twist to the Hewlett- Packard style; he wandered around apparently aimlessly, often looking vaguely clueless. This was a cunning subterfuge, and it took his staff quite some time to figure out that when he seemed to be hanging around idly in the newsroom, staring into the middle distance, lost in his thoughts, the man was actually watching everyone and everything closely and processing the data. And he had a wonderful sense of fun and humour. When someone suggested that we should commission an opinion poll to embellish a piece, he asked: “Why spoil a good story with research?” Once when we were carrying a cover story on endangered species and had (naturally) put a photo of one such animal on the cover, he nodded approvingly and said: “Make sure you also give the Latin or Greek name of that creature—Xavier Pinto or whatever.”

Such comments had nothing to do with a lack of integrity, sensitivity or knowledge. There hasn’t been an Indian editor more committed than Vinod to journalistic honesty and liberal values, and his erudition—which he has never flaunted— is remarkable. He was just a big editor who did not take himself too seriously

By most accounts (I have not met Vinod since 2007), he has changed a lot in that regard over the years, and there is enough in Editor Unplugged for me to fear that those accounts may not be entirely untrue. But let that be.

Though Vinod refers to the book as a sequel to his autobiography Lucknow Boy, it is more a collection of essays and opinions, which sometimes read like greatly extended (I’m not using the term in any negative sense) versions of his freewheeling last page Diaries in Outlook. Of course, there are many anecdotes, and much gossip (he has never made a secret of the fact that he loves—indeed, values—gossip. ‘If you remove gossip from journalism, you say goodbye to 50 per cent of journalism as it is today,’ he writes. ‘Much of journalism, the good, the bad and the ugly, begins as gossip.’). There is also a swan-song quality to the book. The first chapter is titled ‘Walking into the Sunset’, and mentions epithets and tombstones. Another deals with whether he would have lived his life differently if given a chance, where he reveals more about what he is as a person—or thinks he is as a person—than perhaps he has ever done in intimate conversations. It is a fascinating confession (especially about love—yes, love). But if Vinod is indeed thinking of eventide, etcetera, he still has his copyrighted courage and candour fully intact. He recounts how a furious Ratan Tata reacted after Outlook published the Niira Radia tapes, filing defamation suits, terminating all commercial and editorial engagement— no ads from any Tata company, not even routine press releases. He is unafraid to concede that Arvind Kejriwal ‘completely bamboozled me’. Through 2012 and 2013, ‘if Kejriwal had claimed that he could walk on water, I would have endorsed the claim… With the benefit of hindsight, can I justify my passionate advocacy? I doubt it.’

His silver public image as an objective editor has always had a cloudy lining: that he is a ‘Congressi’. And till seven or eight years ago, Vinod certainly—and, I suspect, with a sense of perverse fun—contributed to that, calling himself (I paraphrase from memory) ‘a self-confessed Congress stooge’ and suchlike, several times in his Outlook Diaries. In Editor Unplugged, he explains—with extraordinary frankness—his changing perceptions of the Dynasty, from loathing Indira Gandhi to re-examining her role in post-Independence Indian history, to his growing appreciation of Sonia Gandhi and subsequent disenchantment with her and Manmohan Singh (who he thinks ‘loved being prime minister too much’). He admits that, despite a visceral antipathy for the Sangh Parivar, he was ‘moved by the logic of [Narendra Modi’s] request’ in his campaign speeches that if the people of India had given the Congress 60 years, they should give him a chance for 60 months. Vinod has always been his own man, with his own incorruptible ethical system, committed wholly to the truth but never blindly, and always willing to give the other side a fair hearing.

What made Vinod such a unique editor? In this book, he talks about finding his ‘voice’ as a writer, but the same can be extrapolated to him as an editor: ‘The ‘voice’ is for the individual to find. You can’t fake it, you can’t copy it. It has to be your own. How you acquire it is a mystery. But acquire it you must. It will not come if you lie, evade, tell half-truths… Once you find your voice, good, bad, or indifferent, you can write text which, if nothing else, is honest. And your own.’ No Indian editor has stuck by his inner voice in his career, and especially the last two decades—these years have been the most difficult ever for editors—more than Vinod. Anyone interested in the value—and values—of a righteous media should read Editor Unplugged. And every aspiring journalist should learn the lines I have quoted above by heart. For, as Vinod puts it, eloquently, we are in the Last Chance Saloon, and there’s no time left for one for the road.

As for the swan song theme, I hope that the sunset keeps receding from Vinod as he marches towards it in the same mischievous spirit that has marked his life and career.

(Sandipan Deb is the author of The Last War, and editorial director of Swaraja)