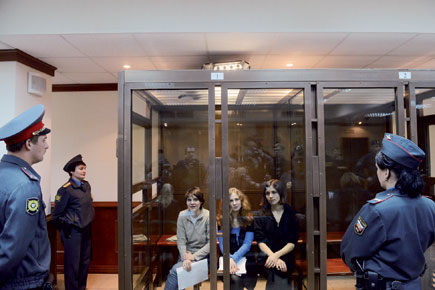 How do you write books about people you cannot interview? Some of your subjects may be too autocratic to be accessible, some dead, some reclusive, and some jailed and denied communication beyond family. Masha Gessen should know. The 46-year-old Russian-American writer-journalist and gay rights activist admits that, over time, writing such books has become a specialty of hers. And she offers a simple yet compelling tip: cast a wider reporting net.

Gessen met Vladimir Putin only once and very briefly after a long wait— business as usual for anyone who wants to meet him—but produced one of the most definitive biographies of the Russian leader and his rise to power from a low-level KGB officer: The Man Without a Face: The Unlikely Rise of Vladimir Putin. She has never met Grigori Perelman, who solved the complex Poincare Conjecture, but has written perhaps the most rivetting account of the reclusive Russian mathematician who turned down honours like the Fields Medal (the Nobel Prize of math), the $1 million Clay Prize and university postings at Princeton, Berkeley and Columbia, among others. The book—Perfect Rigour: A Genius and the Mathematical Breakthrough of the Century—drew much from secondary sources and an interview of the mathematician by Sylvia Nasar, author of A Beautiful Mind. It was a bestseller. Based largely on conversations with other members of her family, she has written a book on how both her grandmothers survived Hitler’s war and Stalin’s peace.

In Gessen’s latest book, Words Will Break Cement: The Passion of Pussy Riot, she digs deeper into the lives of prominent members of the Russian feminist punk group, right from their childhoods to their current iconic status as a protest art group with a global fan following, which includes the likes of pop diva Madonna and Wikileaks founder Julian Assange. Pussy Riot is a band with a variable membership. It comprises three known names; the rest are anonymous. The book went to press weeks before the December-end release of two lead members of the band, Nadezhda Tolokonnikova and Maria Alyokhina, after a prison term of nearly two years. Their crime: protesting Putin’s misrule at Moscow’s Cathedral of Christ the Savior in early 2012. Yekaterina Stanislavovna Samutsevich, the third known member of the group, was released on a suspended sentence by a judge in October 2012 after her lawyer argued that cathedral guards had stopped her before she could get her guitar out of its case.

Of the three lead members of Pussy Riot, formed in August 2011, Gessen has never met one and has spent only a few hours with another, but she was able to do a series of recorded interviews with Samutsevich, the third among the famous trio punished on charges of hooliganism and for spreading religious hatred. One anonymous Pussy Riot member, who was not arrested, asked for money to be interviewed, but Gessen decided to forgo the option. ‘In the many months of intensive reporting for this book,’ says Gessen, ‘this was the only interaction that contradicted the spirit of openness, accessibility, and free flow of information that marked Pussy Riot. The rest of the time, I was not only careful but often awed by the ability of Pussy Riot and their family and friends to maintain this spirit under the most trying circumstances.’

At a personal level as well, circumstances were trying for Gessen. As she worked through the book, Russian authorities were in the process of bringing in a law that could see same-sex couples lose custody of their children. She and her girlfriend then decided to move to New York along with their children. “I didn’t want to lose my children,” she says emphasising that she didn’t move to the US from fear of retribution by Putin’s government for ripping Putin apart in her biography, a hard-hitting book that unravels the making of a dictator. Well-wishers had advised her to leave Russia after the biography came out, but she had refused.

One of her key sources, who offered valuable inputs for her Putin book, was St Petersburg-based politician Marina Salya, who had to flee to a village following death threats. An investigation led by Salye almost unearthed Putin’s alleged corruption deals before he was thrust to the prime minister’s post by Boris Yeltsin’s inner circle in 1999, says Gessen, who has also written extensively for publications such as Vanity Fair, The New York Times, Slate.com and others. One of her big stories focused on the killing of journalist Anna Politkovskaya and the death of journalist- turned-FSB officer Alexander Valterovich Litvinenko.

The story of the band that rocked Russia is of great significance in Russian politics, argues Gessen. The crackdown on Pussy Riot over their symbolic protests against Putin— performing a ‘punk prayer’ asking the ‘mother of God’ to ‘get rid of Putin’— marked the beginning of the most oppressive era of post-USSR Russia, she says. Besides the Moscow church, which was demolished in the 1930s and rebuilt decades later, Pussy Riot has performed in places where it is illegal to organise such events, like on the roof of a bus or on the Metro. Its members have also crashed a fashion show.

Their first performance was on 7 November 2011, on the 94th anniversary of the October Revolution. The video of that performance, titled ‘Free the Cobblestones’ and featuring music by British punk band Angelic Upstarts, went viral online. The second was an attack on the Putin era’s obsession with luxury, performed on a street lined with fashion boutiques. Gessen’s book tracks weeks of rehearsal and work behind each of the clips, and how the band went on to dominate headlines, first in Russia, then elsewhere. She also traces the internecine wranglings within Pussy Riot, as well as its parent body Voina, which was founded in 2007.

For the book, the author managed to communicate with the jailed band members through letters that were, of course, monitored by prison censors. She used the pseudonym Martha Rosler, the name of a contemporary feminist artist, as suggested by Nadezhda, or Nadya, who had smuggled out terms of correspondence to Gessen: never mention writing a book or any intention of publishing our correspondence, bear in mind that the letters will be read by censors, etcetera. She kept in touch with Nadya and Maria, and often drove long distances with their families, who were allowed infrequent visits to the jail. She even risked being detained for taking pictures in a penal colony in Zubovo- Polyanski district.

The writer makes some interesting observations about the childhoods of the band members and how their situations and reading shaped their capacity to protest and defy authority. Gessen is no stranger to writing on the police and agencies of the Stalin-era, and often finds great resemblances to that era in Putin’s Russia—one of them being the way secret agents followed Pussy Riot. The young men who followed Pussy Riot, Gessen says, included some who identified themselves as ‘art critics in civilian clothing’, an expression for KGB agents of yore whose job it was to inform on dissidents in the Soviet Union.

By the time Gessen’s work hit book stands, Nadya and Maria had been released from prison following an amnesty by the state Duma, and were back in action again. The exaggerated make- up, neon-coloured balaclavas and multi-coloured stockings were back.

Pussy Riot called for a boycott of the Winter Olympics in Sochi over Putin’s alleged human rights violations. When they performed there, the police attacked them with horsewhips and pepper spray. The incident sparked worldwide protests and forced the International Olympic Committee to admit that images of the attack were ‘very unsettling’. The performance art collective’s latest video, called Putin Will Teach You How To Love The Motherland, features footage of the attack in Sochi.

Gessen is glad that protestors in Ukraine have managed to throw out a regime backed by Putin, whom she says suffers from pleonexia, an exotic term for the insatiable desire to have what rightfully belongs to others. She doesn’t find the term kleptomania— which refers to a pathological desire to possess things for which one has little use—apt enough.