What adds spice to the memoirs of Padma Lakshmi, model and celebrity chef whose story stretches from conservative Madras to haute Manhattan, is the portrait of her ex-husband Salman Rushdie, ‘all arched-eyebrows’ 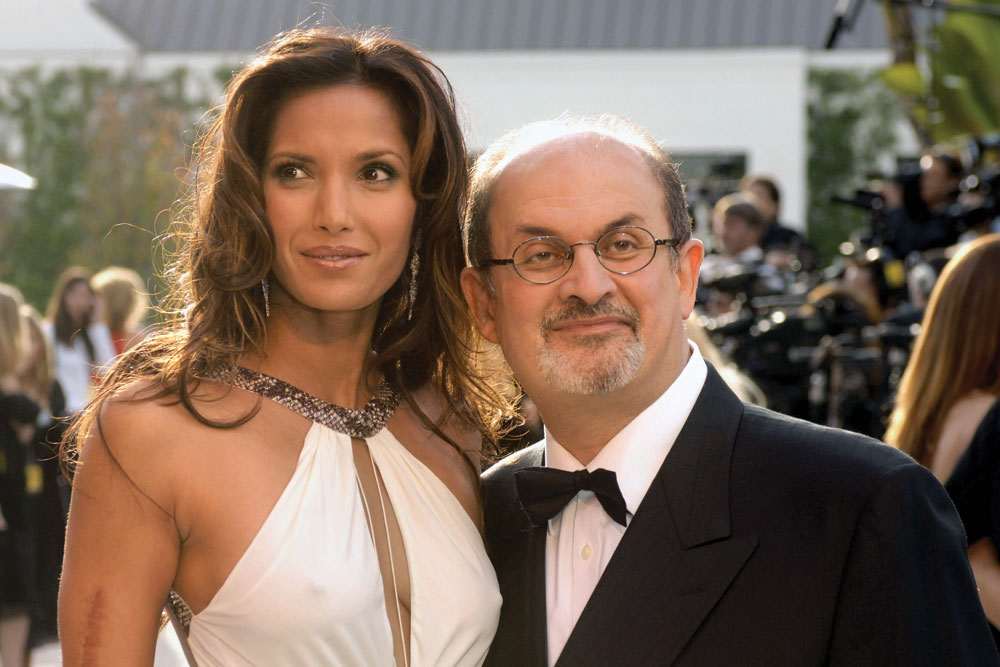 ‘I’D POKE my head into his office and find his lap. Occasionally, he’d show me drafts of his work—an article for The New Yorker, an op-ed for The Guardian— and I’d pore over each one, trying to impress him with my thoughtful feedback. He ultimately made it clear that anything but my gushing approval would be ignored. But I didn’t mind. He was the writer, after all.’

What are the Key Result Areas of the wife of a famous husband? Is she to hold a candle to his glories? To dutifully feed his ego, tolerate his tantrums and pander to his demands? Or does she live her own life on her own terms?

Padma Lakshmi had the good (or, perhaps, bad) fortune to marry one of the most famous authors of our time—Salman Rushdie. Her claim to fame inevitably became that she was the spouse of the man who had a fatwa to his name. What she had done before, and what she has done since is of little consequence to a ruthless and shallow public that finds her newsworthy for bagging and bedding Rushdie.

In Love, Loss, and What We Ate (HarperCollins, 336 pages, Rs 699), Lakshmi attempts to ‘own’ her own history and set the record straight. This is her ploy to wrest the narrative away from the renowned master of words. While the book has little literary sparkle, it impresses the reader with its honesty and surprises with its experiences. Here is a self-made woman originally named Padma Parvati Vaidyanathan from Madras who started off as a ‘fitting model’ (‘the lowest rung on the modelling ladder’) who went on to walk the ramps of New York and Milan. She has been photographed by ace fashion photographer Helmut Newton and has hosted Top Chef US for years. She survived abuse from a family member as a child, a terrible car crash as a teenager (which left a creeper- like scar down her arm), disappointment and penury as a model, a gynaecological condition which caused a lifetime of pain and risked leaving her barren, a very public divorce, a custody battle over her daughter and the death of the love of her life. And all of this by age 45. A reader of this memoir will realise: there is more to Lakshmi than Rushdie, much more.

In Love, Loss, and What We Ate, the early chapters deal with Rushdie. Once she is done detailing his magnetism, which turns into abrasiveness over eight years, Lakshmi narrates tales from her past and present. She fells the beast of curiosity, and our salacious appetite by putting him first and foremost. By framing Rushdie early in the book, she acknowledges and assuages the voyeuristic nature of the public. And she triumphs, as she knows now that she has gripped the reader, the book will be read till the end.

I don’t doubt he loved me. Nor do I doubt that what seemed like a desire for me was also in part a desire for what I
provided—an adoring audience

The Rushdie parts are as sensational as the tabloids could have hoped. If he anointed her ‘the Illusion’ in his memoir Joseph Anton, underscoring her ambition over all else, she paints him in the hues of a megalomaniac.

While her modelling career was stagnating, Newsweek informed her that they wanted to put her on the cover for a story on ‘New India’. Pleased with the news, she rushes to tell her husband who is in his study. She writes: ‘Lately, anytime I had some good news about my professional life, it seemed to interfere somehow with us. He just said, ‘That’s great. I’m happy for you. The only time Newsweek put me on their cover was when someone was trying to put a bullet in my head.’’

Even while Lakshmi constructs Rushdie as the needy and demanding codger, she also admits being deeply in love with him. He opens worlds to her that she hadn’t been privy to— that of the literati and high society—and an opportunity to ‘groom’ the mind. As his partner, she orchestrates elaborate dinner parties for his illustrious friends such as fellow writers and intellectuals Susan Sontag and Paul Auster. ‘My strategy for overcoming feelings of inferiority was to keep my hands busy, to cook and bring drinks and clear plates,’ she writes with disarming honesty. Food and cooking, condiments and the kitchen, become her refuge in Rushdie’s apartment as they would when she moves out into her own place.

Lakshmi never sugar-coats the fact that theirs was never a match between equals. In private, he is the hero, she the cheerleader. In public, he is the icon, she the ‘ornament’. Lakshmi says it best, ‘I don’t doubt he loved me. Nor do I doubt that what seemed like a desire for me was also in part a desire for what I provided—an adoring audience.’

As long as she serves the purpose of a blurb on a book jacket—spouting unreserved adulation and endorsing his being—their relationship endures. When she questions him or asks more from the relationship and for herself, their equation falters and fractures. In one of the funniest anecdotes in the book, she recounts how Rushdie’s mood would sour every October, as it was the month of the Nobel Prize. ‘He was certain he was nobelisable, and every year I’d comfort him, cooing, ‘Of course you deserve it’ and ‘Oh, they don’t know what they’re doing.’ I did feel he deserved it and the disappointment understandably cut him deeply. But then he’d say, ‘Yes, many great artists never get the Nobel,’ continuing on to list, without irony, those writers: ‘Proust, Joyce…’

While Rushdie comes across as a man with little self awareness, he also appears to be blind to the pain of others. Lakshmi—who went on to start The Endometriosis Foundation of America— writes in detail about the condition, which causes searing menstrual cramps and cripples her for a week every month from puberty to adulthood. He never recognises the seriousness of her condition and considers it an easy excuse to refuse sex. She undergoes multiple and complex surgeries which leave her kidneys in stents and stitches in four organs. Through all of this her husband remains unmoved and even cruel. Twenty-four hours after her discharge from hospital, he leaves for a work trip, saying, “The show must go on, after all.”

THIS BOOK throws up numerous such revelations. Taller and ganglier than her fifth-grade class in the US, she is nicknamed ‘Black Giraffe’. In a desperate—and unsuccessful—bid to fit in, and to hide her ‘third-world’ identity she changes her name from Padma to Angelique for four years in high school. Raised by her grandparents in Madras, and her single mother who worked as a nurse in Sloan Kettering Cancer Centre, Lakshmi had to battle the racism of 80s New York, at a time when India was neither ‘cool’ nor ‘exotic’. Her ‘divided self’ is torn between connecting to India and trying to belong to the US.

When she learns that she is pregnant, despite all odds, she does not know who the father is. After terminating her marriage with Rushdie, she cautiously embarks upon relationships with Adam Dell, a venture capitalist, and billionaire businessman Teddy Forstmann. Teddy would be the big love of her life; he played the role of a father to her daughter Krishna, even though Adam was the biological father. Thirty years older than Lakshmi, Teddy died of cancer in 2011. Lakshmi writes with stark frankness of her relationship with the two men, how they wooed her, and tried to win her from the other, and how she ultimately succumbed to the charms of Teddy, who as an older and more accomplished man, was ‘prime Padma bait—a worm to a fish, a fish to a bear, a mango to an Indian girl’.

A life as colourful as this lends itself to a memoir. It is catty in bits, where she compares Rushdie and Teddy, for example. Her expositions on food are long drawn and bland. Her decision to consume her placenta after childbirth is cringe- worthy. But Love, Loss, and What We Ate achieves what it set out do—it proves that Padma Lakshmi is a model, chef, host, writer, advocate, mother, daughter, partner, friend and much more than the former wife and arm-candy of a famous man.