One Book is Not Enough

The controversial memoirs of the ex-confidant of Sonia Gandhi entertain but fail to deliver the Kissinger-esque history lessons the former foreign minister, a skilled storyteller, could have given us 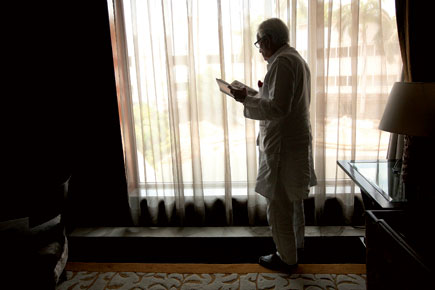 The controversial memoirs of the ex-confidant of Sonia Gandhi entertain but fail to deliver the Kissinger-esque history lessons the former foreign minister, a skilled storyteller, could have given us

Natwar Singh owed us a better book, more substantive and more thoughtful a work than One Life Is Not Enough.

I belong to a very large gaggle of his friends and admirers. He is one of the very few men in public life who are at home in the world of books, ideas and imagination. Jaswant Singh is perhaps the only other contemporary political figure who qualifies for his company.

I remember borrowing, many years ago, a book from his well-stocked library—Isaiah Berlin’s collection of essays, entitled The Proper Study of Mankind. No easy reading, but Natwar Singh’s copy was extensively marked with annotated notes in the margins!

Over the years I reviewed, favorably, many of his books, and came to value him for his chutzpah, style, verve, and, for that rare, storytelling gift of a raconteur.

He was always delightful company. Urbane, gracious and, if the occasion permitted, a bit naughty. My friend Jairam Ramesh and I had once nicknamed him ‘the elegant Jat’. Very appropriate.

It was Natwar Singh (apart from ML Fotedar) who assiduously “sold” me (and many others) Sonia Gandhi: as authentic goods, as a worthy successor to the Nehru-Gandhi family mantle. He was her promoter-in-chief.

Around 2000 Natwar Singh got very annoyed with me when I wrote that Sonia Gandhi would not—and, should not—make it to the Prime Minister’s post. He was so cheesed off with me that he almost called for my social boycott among friends. For almost two years, he cold-shouldered me. All in defense and honor of Sonia Gandhi.

Above all, Natwar Singh has a sense of history, with a special eye for rites and rituals of power. That is why many of his friends and admirers will find this book a trifle disappointing; it falls halfway between an autobiography and a memoir. And, most of the stories have been written and published before—of course, with familiar elegance and style and wit.

When a man so widely read and so well-versed in the forces that constitute the stuff of history puts his pen to paper, the expectations are high; the reader has a right to feel that he ought to be treated to insightful lessons in the ordeal of decision-making at the highest level, and a peep into what constitutes that elusive but vital knowledge called statecraft.

On that count, One Life Is Not Enough falls short.Neither a young IFS probationer nor a future Prime Minister can profit much from it. People like Natwar Singh owe it to us to educate the nation in the complexities of governing and diplomacy in a very complex world. Alas, there are no Kissinger-esque history lessons here.

Yet, this is a very readable book on many counts. To begin with, the pages on Pakistan are rather enjoyable. Singh’s appointment as High Commissioner to Islamabad was perhaps the most substantive assignment he has had in a long innings as a foreign service officer; as an envoy in an important country, with total confidence and access to the Prime Minister of the day.

His considerable talent for pen portrait delights: ‘The President [Zia] has power, but not personality. There was something misshapen about it.’ He presciently notes: ‘His lack of charisma was made up for by a stunning display of tahzeeb, tahammul and sharaft [politeness, patience and civility]’.

Natwar Singh displays his analytical wares very well when he dissects Zia’s ‘four instrumentalities to retain control’ over Pakistan. ‘Firstly, as Supreme Commander; he had full support of the armed forces; secondly, he assiduously cultivated religious leaders and orthodox religious parties; thirdly, he received considerable funds from Saudi Arabia and Kuwait to open large number of madrasas; and, finally, he fully exploited the Soviet occupation of Afghanistan which he projected as an attack on Islam.’ A masterly analysis. No Foreign Office can ask more of its ambassador.

The book is noteworthy on another count. Perhaps unwittingly, Natwar Singh has opened a window. Dispersed throughout this episodic book are disturbing snatches of the relationship between the armed forces and the political leadership. Sample a few:

‘Her [Indira Gandhi’s] instructions were that on no account should the Golden Temple be fired upon. These were ignored.’

‘The Chief of Army Staff boasted that he could take care of the LTTE and Prabhakaran in two weeks. It was a foolish boast.’

Some pages later, he talks about Operation Brasstacks: ‘I told Rajiv Gandhi in my capacity as Minister of State for External Affairs, that the Ministry of External Affairs knew nothing about this. The Prime Minister said that neither did he. I was appalled. Apparently, Arun Singh and General Krishnaswamy Sundarji had acted without his approval.’

These incidents took place when we had two strong Prime Ministers—and, reveal an unhappy pattern of machismo, bragging and incompetence.

There is an important lesson here: Prime Ministers who choose to rely on the army to solve intractable political or diplomatic problems end up paying a heavy price. Yet, our foolish and divided political class continues to pamper and molly-coddle the armed forces; a Prime Minister who does not give in to the army brass’ bluff and bluster gets painted as a weak leader, gets accused of being un-mindful and unappreciative of ‘national security’. The latest manifestation of this foolishness is the BJP leadership’s infatuation with retired General VK Singh.

It would appear that Natwar Singh has two major scores to settle. One with his last Prime Minister, Manmohan Singh and, second with his political boss, Sonia Gandhi.

Natwar Singh would like his readers to believe that somehow it was Manmohan Singh who was the first to depart from a national consensus in order to cozy up to the Americans: ‘There was a broad national consensus on foreign policy till Manmohan became Prime Minister. He leaned backwards to accommodate the US, even when they displayed indifference.’ This is revisionism, pure and simple. In the process, Natwar Singh contradicts himself. Indeed he argues that it was he—not Manmohan Singh— who did the heavy-lifting in taking forward the Indo-Nuclear deal negotiations, citing Condoleezza Rice as his witness. Yet, the onus for departing from the ‘national consensus’ is placed at Manmohan Singh’s door.

Not only that, a few pages earlier, Natwar Singh writes: ‘The Indo-US Civil Nuclear Agreement was the logical though somewhat unexpected culmination of the Next Steps in Strategic Partnership (NSSP) which India and the US had committed themselves to during the earlier NDA government and President Bush’s first term… the UPA government continued this engagement with the US.’

Pray tell, if the UPA was merely carrying forward the commitments made by the previous government, how could it or its Prime Minister be accused of departing from the national consensus? The departure had already been made, and Natwar Singh himself had eloquently spoken against Jaswant Singh’s pro-American tilt. But, in One Life Is Not Enough, Natwar Singh cannot bring himself to be critical of his new political friends.

Nor, for that matter, does Natwar Singh tell us why the entire Congress leadership—including Sonia Gandhi, Manmohan Singh, Natwar Singh, Murli Deora and RP Goenka—travelled to Washington in June 2001. It was not a sightseeing trip. Was it not to mend fences with the ‘Americans’?

It is his basic contention that because he was implacably anti-American, the ‘US Lobby’ had the knives out for him— first ‘they’ opposed his induction as Foreign Minister and then ‘they’ used the Volcker report to ease him out. There may be an element of truth in this contention, but he provides no convincing evidence to support this charge. It is only after he was made to leave the Cabinet that Natwar Singh became loud and clear in his reservations about the nuclear deal.

Natwar Singh has quite a bit to say about Sonia Gandhi. It is the section on Sonia Gandhi, in this book, that has been most talked about—as perhaps he and his publishers had intended all along.

No one is in a position to contest Natwar Singh’s recollection of his relationship with Sonia Gandhi. His memory and facts must be respected. Nonetheless, it is rather late in the day for him to complain about Sonia Gandhi and her inadequacies. After all, he has had a very crucial and significant role in promoting her, just as he helped manufacture the myth of the Nehru-Gandhis. As early as 1967, he had already decided to declare the family ‘an institution’. The book is littered with instances of occasions and techniques he used to help craft a public persona around Sonia Gandhi, after Rajiv’s death.

Importantly, Natwar Singh also attests to her character flaws—traits that can become evident to only those who work together closely.

In the book, Natwar Singh reveals an episode in 1997 involving Sonia, himself and the former Zambian president, Kenneth Kaunda. It is an embarrassing kerfuffle. And, he concludes: “Sonia was deliberately capricious. It was unbecoming of her. The Kaunda incident left a bad taste in the mouth.”

Yet, he continued to be a willing, cheerful and enthusiastic member of her entourage. And he continued to subscribe to the myth that by virtue of her marriage to Indira Gandhi’s son, she had naturally internalised, imbibed and acclimatised herself in all virtues—the wisdom of a Jawaharlal Nehru and the political virility of an Indira Gandhi. He continued to intrigue on her behalf in the Congress Party.

The break came in the wake of the Volcker row-de-dow.

There is a touch of pathos in his lamentation: ‘My relations with the Gandhi-Nehru family have begun in July 1944; at least I should have been given the benefit of doubt by the party chief [Sonia Gandhi].’

Now, in his own case, Natwar Singh appears to be favoring the principle of personal friendship [with the family, Sonia] over the unsentimental demands of realpolitik.

No one will ever know the true nature of the falling out between Sonia Gandhi and Natwar Singh. But it is sadly clear that in the process of getting at Sonia Gandhi, Natwar Singh has regretfully devalued his own life-long accomplishments. What is most glaring is that this proud, educated, urbane, self-confessed Nehruite should have travelled all the way to Ahmedabad, in what could only be a journey of obeisance, to call on Narendra Modi, even before he got elected as Prime Minister. Not only that, he chose to include in the book a photograph of this visit to Modi. He can expect his friends to understand his disenchantment with Sonia Gandhi; he cannot expect them to approve of this lapse of judgment.

Natwar Singh has had the satisfaction of getting back at Sonia Gandhi. He has practiced, with aplomb, what that fictitious character, Jorge Luis Borges, calls, in Luis Fernando Verissimo’s delightful and hilarious book, Borges and the Eternal Orangutans, ‘the dangerous art of the written word’.

Nonetheless, one is tempted to ask an obvious question: why did Natwar Singh not publish the book when Sonia Gandhi was still in ‘power’?

More to the point, had he, for example, disclosed Rahul Gandhi’s stand on his mother becoming Prime Minister, perhaps the Congress Party would have gathered its collective wits, drawn appropriate lessons and projected someone other than Rahul Gandhi as its 2014 Prime Ministerial mascot.

(Harish Khare is a senior journalist, scholar and commentator based in New Delhi)