...and it is advantage nurture, at long last, going by the sudden spurt of tomes being published on this vital subject. 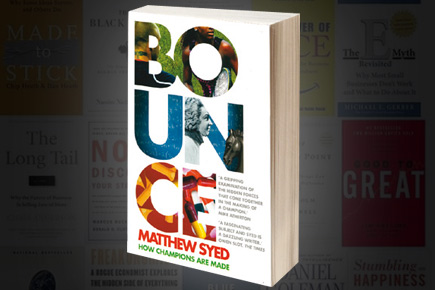 …and it is advantage nurture, at long last, going by the sudden spurt of tomes being published on this vital subject.


…and it is advantage nurture, at long last, going by the sudden spurt of tomes being published on this vital subject.

Experts make snap judgments, say experts. I guess that’s worthy of emulation, then, since I mostly have judgments snap me (my ankle tendons one moment, my peace-of-mind the next). So, despite the surfeit of self-actualisation books around, Matthew Syed’s Bounce had my full attention within a split-second of my chancing upon this book. And, as corny/poetic as this sounds, some of it surely had to do with my revulsion at the incestuous little world that some ‘opinion makers’ have been revealed to inhabit. For all the lofty talk about rule of law, India remains a country where it’s considered quite alright to twist the truth on behalf of someone close. Favouring one’s own relatives, some theorists say, can be ‘rationalised’ by the evolutionary advantage it gives; it helps perpetuate one’s own kind of genes down the generations, granting a sort of genetic immortality that humans are programmed to aim for. India’s peculiarity is that even professional guilds exhibit the same cronyish behaviour as genetic groups (and are often the same anyway); this is perhaps inevitable under the central assumption of the caste system—that aptitudes are dictated by genes.

That ‘nature’ trumps ‘nurture’, however, is a myth. A myth that Malcolm Gladwell’s Outliers and David Shenk’s The Genius in All of Us busted by showing that success is not about innate talent, but pretty much ‘1 per cent inspiration and 99 per cent perspiration’, as Thomas Edison had it.

That genius can be nurtured is not a new point. But Syed smashes it home with his own experience as a British champion of table tennis (an achievement he attributes mostly to luck and coaching). In 2004, he had Wimbledon tennis champ Michael Stich serve him his famed court scorchers, just to see if he’d be able to play the yellow ball back. ‘I was confident I would return the serve…’ writes Syed, ‘Stich tossed the ball high in the air, arched his back, and then, in what seemed like a whirl of hyperactivity, launched into his service action. Even as I witnessed the ball connecting with the racket, it whirred past my right ear with a speed that produced what sounded like a clap of wind.’ It was evidence enough that inborn reaction speed has no role in the game. After all, ‘The time available to return a serve in tennis is about 450 milliseconds; but there are less than 250 milliseconds in which to return a smashkill in table tennis.’

Returning a serve, it seems, is all about reading the opponent’s pattern of behaviour before the ball is actually hit, and a champ is just someone who’s played long and hard enough to turn his response reflexive, more or less.

The most dramatic demonstration of nurture power, of course, took place in the field of chess. Laszlo Polgar, an educational psychologist, declared he would turn his babies into chess champs as an experiment in child rearing, and he did. By the time Sofia Polgar defeated a succession of male grandmasters in Rome, 1989, and that too at a game of uncompromising free will that’s reduced the reputation of fatalists all through history to ash (my own little guzaarish here: read David Shenk’s The Immortal Game), the world at large was ready for an inversion of old assumptions.

Or was it? It has taken time, and may take longer. It isn’t easy playing myth buster. There’s the old guard to contend with. There’s the odd loss to bear. Thankfully, there’s also an open arena for any notion to be put to test, gall-willing, no matter whose it is.