My Wife’s an Actress

This book on the rebels of Hindi cinema, the women who crossed into a forbidden zone, probes their minds too sparsely. 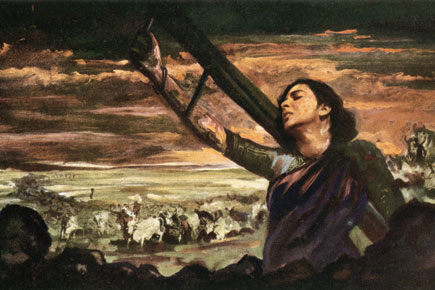 This book on the rebels of Hindi cinema, the women who crossed into a forbidden zone, probes their minds too sparsely.


Nearly 85 per cent of students in the last year of school or studying in college in the metros want to be movie stars in India. In towns and villages the number is higher. There’s only one sure way of getting into the movies. No, it’s not the casting couch, stupid. All you need is a superstar for a father or mother. Raj, Randhir and Rishi Kapoor, Sharmila Tagore, Vinod Khanna, Anil Kapoor, Shotgun Sinha, Sunil Dutt, Tanuja, Dharmendra, Amitabh Bachchan were all stars and so are their children. Now if you didn’t choose your parents carefully, the only other alternative is to become a model or Miss India and hope and pray you will step out from the catwalk and walk straight on to the silver screen. Aishwarya Rai, Sushmita Sen, Priyanka Chopra, Lara Dutta, Bipasha Basu and many others, they all took this route to stardom. (Imagine what would happen to the subcontinent, if they had their way. There would be nobody in the audience in the cinema halls. And hardly any business managers, doctors, chartered accountants, engineers, or IT specialists.)

Forget becoming stars, the fact is not even 0.005 per cent of the aspiring actors will end up being extras. Okay, I doctored those numbers but they are close, very close to the actual figures. The hold the film medium has on Indians is nothing short of astounding. It’s not only that educated young women from all classes of society aspire to stardom, it’s embarrassing how hard and shamelessly many parents will try to promote their children’s film careers. Talk about volte faces and sea changes in societal mores and values. It was inconceivable around the 1920’s and 30s for women from middle class families to enter films in India. As to the rich, they would have preferred honour killings to seeing their daughters or ‘bahus’ in the movies. Our children’s and grandchildren’s entire spectrum of general knowledge revolves almost entirely around the lives of film stars and films. And yet you will come up with an absolute blank when the subject is the early years of cinema in India.

In recent years there has been a steady stream of books by foreign and local scholars and dilettantes who write hagiographic coffee table books about matinee idols from the 1950’s and the 1970’s. Raj Kapoor has always been celebrated as the ‘great showman’, and the new books have continued in the same old almost reverential tone. If possible they are even more politically correct and will praise the RK banner’s social commitment instead of critically probing the RK oeuvre. Dileep Kumar and Amitabh Bachchan have also come in for a similar genuflecting treatment. So it’s a salutary change to find that Oxford University Press is bringing out a series on South Asian Cinema. Neepa Majumdar’s book, Wanted Cultured Ladies Only! Female Stardom and Cinema in India 1930-1950s, is a scholarly study of a crucial and formative period in our film history. As such it raises high expectations especially since its range, its academic approach, its seriousness of purpose, its tone and language and its scholarship will set the bar for the books that will follow in the series and the general run of books on Indian cinema in the future.

WCLO may claim to be about cinema in India but it deals mostly with Hindi cinema. It’s perhaps the world’s worst-kept secret that Bollywood survives on its parasitical connection with Hollywood. Things are changing substantially for the better on the fringes of Bollywood but mainstream Hindi cinema faces the west and prays five times a day for inspiration to that sign on the hillside in Los Angeles. But it was the same from the very beginning. The title of the introduction to Majumdar’s book is “Translocating Hollywood Stardom in India”. And that’s exactly what the book proceeds to show us in chapter after chapter. However, the process is not as simple as a duplication or a cloning, translocation also means transforming and putting an Indian spin on it.

The backdrop of this nascent cinema from the subcontinent was the national freedom struggle and the notion of what constituted Indian womanhood. Women may have performed a very public role and stood shoulder to shoulder with the men in resisting British Rule but there was no confusion about or question of crossing the Lakshman Rekha. The stage and the cinema were a no-no. Full stop. That posed an almost irresolvable dilemma for the new art-form. In the good old days men acted the roles of women on the stage but that was a trifle difficult in cinema with the camera doing close-ups and besides, the times were a-changing. The only way out seemed to recruit women from a different class. Curiously or perhaps with an elegant and quintessential Indian form of logic, cinema itself took an equivocal stance in its depiction of women.

In the twenties and even the thirties female actresses were recruited from amongst the daughters of nautch or singing girls. They performed a central role in entertaining the masses but there was a stigma to their names and they could never be acceptable in so called ‘decent’ society. Then came the crop of Anglo-Indian actresses. As with the earlier female protagonists the sterling contribution of Anglo-Indian women in the 1920 and 30’s too is almost forgotten. Perhaps this is because many Anglo-Indians left the country once the British departed and also because in the post-independence phase they seemed to occupy a no man’s land in our perception and imagination.

Since we do not have a national academy of cinema (there are small mercies, you will admit) or major privately-funded art institutions like the National Centre for the Performing Arts in the country for cinema, it is doubtful if, however late in the day, we’ll honour wonderful actresses like Ruby Myers a.k.a. Sulochana and Mary Ann Evans who came to be known as Fearless Nadia, the stunt queen, or those who came before them. It’s unfortunate that Majumdar does not tell us whether these Anglo-Indian actresses knew Hindi or had to learn it? If it was the latter, did they speak with an accent? Again while the author quotes from JBH Wadia’s Those Were the Days, the remarkable transition in their lives does not seem to interest her. They are not mere milestones and signifiers in the evolution of the concept of a star and the notion of stardom, they are women who dared to cross from anonymity to a profession that was considered taboo. They are rebels, dare-devils in real life and their stories, however briefly told, would have made the book lively and told us what made them take the risk and change their lives.

Durga Khote, one of the first actresses to come from a cultured educated background also gets a lop-sided treatment. We are not told what was considered a cultured or educated family. What did Khote study? Was she a Bachelor of Arts or did she have a Master’s degree? Did she come from a middle class family or was it a notch above? We are told that she was married and then divorced before she got into films? Did she choose to go into films? Or did she, like Leela Chitnis who had to support three children, have little choice but to look for any employment she could get? And why films? If she was educated she could also have got a job in another profession? Was it that she felt acting was her calling? Did it give her a sense of empowerment?

Neepa Majumdar puts forward a convincing analysis of the sleight of hand and the underlying conflicting standards involved in an episode in Raj Kapoor’s Jagte Raho which was directed by Shambhu Mitra and which would occur repeatedly in films like Aadmi or Amar Jyoti where the heroines assert their independence and yet in the end relinquish everything they have stood for and follow the paradigm of the model Hindu woman.

Film journals and even film production companies bemoaned at that time that the country did not have stars as Hollywood had. Ironically this was due to the fact that the journalists in the early thirties refused to write about the private lives of the women who acted in films in those days. The times have indeed changed. The relationship between stars today and the gossip columnists and film magazines is symbiotic. The stars may complain about their privacy not being respected but they can hardly think of a worse fate than being ignored.

Majumdar’s book ranges over a wide variety of subjects. There’s even a chapter called The Embodied Voice which deals with playback singing, especially the symbolism associated with Lata Mangeshar and, to a lesser degree, with her sibling, Asha Bhosle. There is a substantial section devoted to double roles and their significance to the stars themselves and the way the audience perceived them. Her chapter called Real and Imagined Stars is particularly noteworthy for clearly exposing the hypocrisy and double standards at work in the Indian response to women in films.

But there is a problem at the heart of the book. It is almost a study in split personalities. There seem to be two Neepa Majumdars. One who sets out to be as opaque as possible. She seems to hail from the late seventies, eighties and nineties when the mark of scholarship was to obfuscate with inaccessible jargon. It’s as if she’s hell-bent on being as intractable and tortuous as possible. But if she is difficult and unreadable at such times, you should read many of the other theorists she quotes. They are many and they mutilate, mangle and desecrate the language in the name of scholarship. Let me for a minute give them the benefit of doubt. If what they are writing is so philosophically complex, and abstruse that they had to perforce cull it from the fringes and margins of language, then perhaps one could have made concessions. But it’s nothing of the kind. Many a time it’s nothing more than self-aggrandising abracadabra.

The curious thing is that every now and then Majumdar will, without notice lapse into normal English. You can actually understand what she is saying. She comes to grips with the dilemmas posed by a profession that suffered from the double talk of a society that could not square its prurience with its genteel pretensions and in the bargain the reader too feels that he’s getting a grip on the subject. Then ten or twenty pages later, he’s at sea all over again. My copy of the book is strewn with abbreviations. GHUs (God Help Us) and ETGLCHUs (Even the Good Lord Can’t Help Us).

Cinema is a very recent art form, one that is a mass art form. But cinema, good and bad, is an amazingly juicy subject. Why study the subject if the intention is to squeeze every last drop of the juice and fun out and make it dry, arid and insufferably boring in the name of a lofty calling called high theory. The best theorists shed light and bring insights to their subjects and they are like viruses, they infect you with their passion, their excitement, their doubts and they push the envelope. Will someone get them to engage with Indian cinema? Please?

Kiran Nagarkar is a novelist, playwright and screenwriter