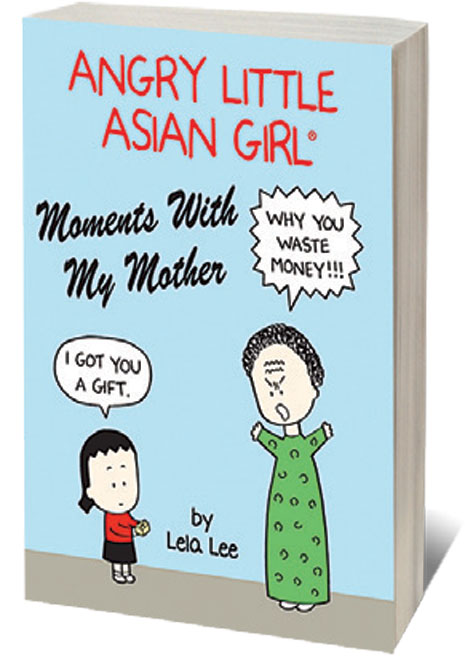 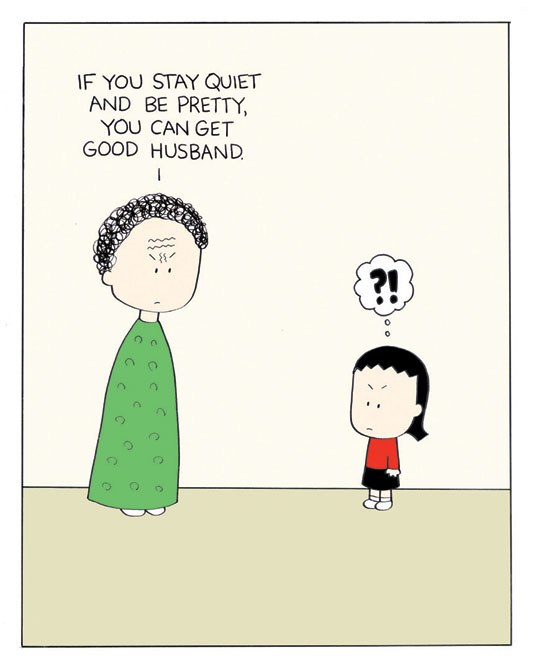 Moments with My Mother by Lela Lee (Courtesy: Lela Lee)


MOMENTS WITH MY Mother is the latest book in illustrator and writer Lela Lee’s Angry Little Asian Girl series. It belongs to a universe created by Lee, composed of animated films, merchandise and more, all on the premise of navigating experiences as an Asian American woman. In Moments with My Mother, Lee uses the comic format to focus on the daughter-mother relationship and its scars.

Within Lee’s simple illustration style is a loaded depiction: Kim, the daughter-narrator, looks exactly the same no matter what her age is. Whether she is being rocked on her mother’s lap and being sung a cautionary nursery rhyme about not trusting boys or sunbathing with a friend and talking about her mother’s inability to apologise, she looks identical at every stage (except the occasional memory flashback as a baby). She is always shown as being significantly smaller than her mother. The agelessness of this character can be read as a remark on her mother’s lack of acknowledgment of her growth, evolution or autonomy as an adult. It also suggests the character’s own inner stunting as a result of being perceived eternally as only a child to be reprimanded and raised, even as she is relentlessly parentified into taking responsibility for her mother’s state of mind.

“You know what’s at the root of every Asian parents’ fight? Patriarchy,” declares Kim in a full-page panel early in the book. Later, this is explained thus: “… mothers from patriarchal cultures yell at their children because that is the only power a woman is allowed to have.” But this analysis is facile, if not factually lacking. In this book, the father’s role is extremely minimal—he shouts about wanting a son, he lifts his legs so the daughter can vacuum, but he is never shown terrorising and traumatising the narrator the way the mother does. The dismissal of the mother’s dysfunctionality as being the result of patriarchy means that this book ultimately lets the abuser off the hook. Similarly, culture is given broad brushstrokes; Lee does not challenge the stereotypical notion of what Asian American mothers are, and only reinforces the same, instead of putting forth more thoughtful perspectives on how perpetrating abuse requires personal agency.

The profound effect of abuse on the survivor is not denied, however. Kim seeks therapy despite the shame she has been conditioned into feeling about it. She contemplates what “community” means when it requires loyalty to harmful people. Conversations with others within the book, and the existence of the book itself, also serve to destigmatise discussing maternal abuse.

But Moments with My Mother simply doesn’t go far enough. It ends with Kim continuing to try to show her mother affection, understand her mother’s and her own psychology, and finding humour in her mother’s lighter foibles, such as irrational frugality. On the final page, the mother explains that criticism is a form of love. “Wow. She must love me a lot,” says Kim, with a sceptical expression. Perhaps the book imitates life in that —abuse cycles are very rarely broken away from. Our narrator doesn’t get her due, but at least she knows she’s in a relationship that drains her. She isn’t in denial about that, at least: at one point, she contemplates: “… I wonder how much more successful and happy I would be if she didn’t criticize me all the time?”

Lee’s merchandise brand Anger is a Gift donates a portion of the profit to organisations that support abused women and children. “I Survived An Asian Mom” repeats a motif on the inner covers of the book. Lee knows, perhaps intimately, what it means to have an abusive mother. Perhaps, the aim of this book is to show others they are not alone, rather than provide a map of how to heal. In that regard, it holds up a mirror with a reflection just uncomfortable enough to prod a different ending— where it really matters.