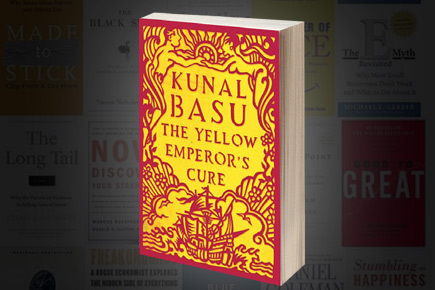 
Perhaps this signals a coming of age, the fact that more and more Indian novelists no longer have to write about their own remembered and embellished childhoods, their imaginatively and narratively enhanced hometowns, districts, uncles and aunties and cousins and servants. Perhaps they are finally ready to step out into world literature as novelists rather than as Indian novelists. In The Yellow Emperor’s Cure, a Portuguese doctor goes to China to find a cure for syphillis. India and Indians are mere mentions in the Portuguese imperium of Basu’s book, Goa a mere footnote to the action that uses Macau as a spring board to the real place, China, where mysterious medical secrets lie.

Antonio Maria is a charismatic young man, a promising medical student, loved by women and men, by nurses, his teachers and his peers. But his perfect life in turn-of-the-century Lisbon, with its vibrant and seductive demi-monde, is shadowed by a private pain: Antonio’s father is afflicted with syphillis. As he watches his parent descend further and further into the hells of dementia, Antonio resolves to travel to the ends of the earth—in this case, China—to find a cure. So, with the help of friends, he gets himself to Peking and into the tutelage of the Dowager Empress’s personal physician.

Yet again, surface appearance and the reality that lies beneath diverge—the seeming serenity of the Empress’ vast enclosure is deceptive. The year is 1898, and outside the palace walls, the ‘spirit warriors’, the Boxers, are on the rise against the opium trade, against European imperialism and against the activities of Christian missionaries. Antonio’s other safe haven in the roiling city is the Legation, where expatriates, diplomats and wheeler dealers live, where the rascist attitudes and rapacious acts of colonialism are nurtured and protected.

As everything that is Western is being violently rejected and destroyed all around him, Antonio finds his personal quest, despite his reservations and impatience, moving in the opposite direction. He seeks professional, emotional and spiritual truths from the East.

There is a compacted quality to the prose in this novel, and it is not a comfortable compactness. Huge things happen in the matter of a few sentences. For all that, there was a quietly seductive, languid luminescence to Basu’s writing in The Japanese Wife; the prose in The Yellow Emperor’s Cure is curiously unlit, despite the wealth of detail that fills out the characters, places and events.

Maybe the fundamental problem with this novel is that the story does not work. There’s too much going on in the background (which is also where the more interesting characters lurk), what with the selling of precious ancient texts and the parties and the Boxers and the persecution of missionaries and the siege of the Legation and the arrival of an Indian regiment to save English diplomats. Whatever’s happening in the foreground is simply not engaging enough.

Kunal Basu’s talent for the novel and short story has been amply displayed in his other works. The Yellow Emperor’s Cure reminds us that there is a wonderful writer somewhere in there, hidden, if not momentarily lost, in a maze that wanders through political upheaval, cross-cultural love, the history of medicine and a significant colonial moment. What Basu does not reach, as he takes us through the maze, is the centre. The reader is abandoned, with neither access to the maze’s secret heart nor a way out.