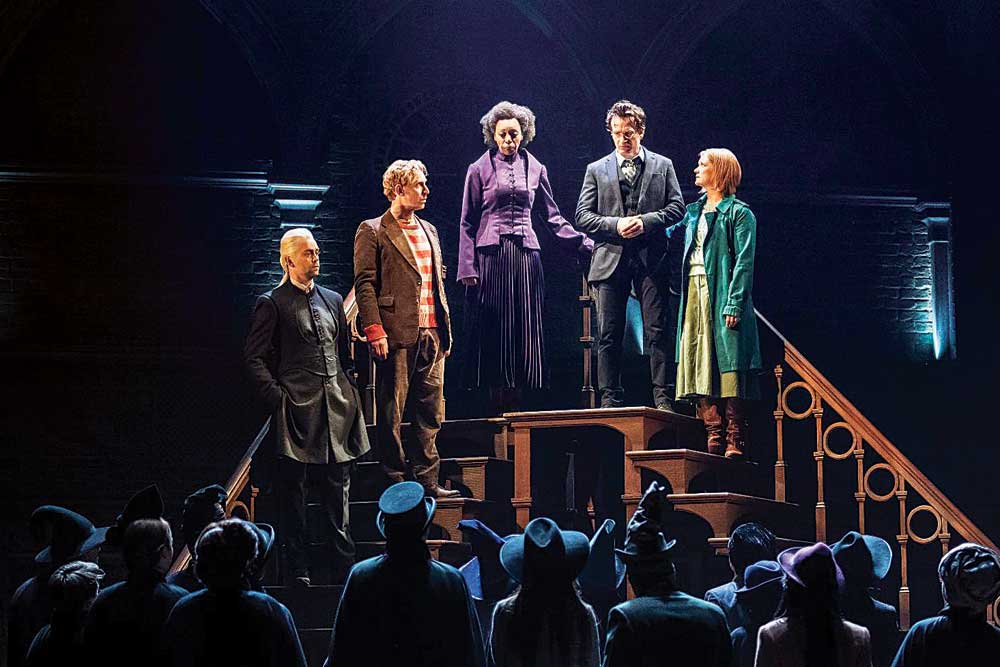 THE LAST TIME we heard from Albus Dumbledore, he said, “Of course it is happening inside your head, Harry, but why on earth should that mean it is not real?” He was already dead at the time, killed by Severus Snape in Harry Potter and the Half-Blood Prince. So his last words really were a make-believe conversation in a make-believe world. Yet it all seemed so very real. From the curses to the creatures, the Quidditch World Cup to the Yule Ball, the cauldron cakes to Bertie Bott’s Every Flavour Beans, it was a world that had been so intricately- crafted, it captured the hearts and imaginations of millions with the very first line of the very first book—‘The Boy Who Lived.’

And an entire generation has grown older and wiser with him. When Harry Potter crosses onto Platform 3/4, we reflected on our first day at school without mum and dad to help retie our shoelaces. When he looks into the Mirror of Erised and sees his murdered family, it reminded us of the anguish of loss. We laughed when he sticks his wand up a troll’s nose, fell in love the first time he kisses Ginny, dived under the covers when blood is drawn from his veins to resurrect Voldemort and wept when everything came to an end.

Over a span of seven books, eight films and 19 years, Harry Potter taught his readers what it’s like to live with the loss of loved ones, treat both life and death as great adventures, stand up to and for your friends, and find happiness even in the darkest of places (“If one only remembers to turn on the light”).

Then, just when you thought that every loose end had been tied, every character had received a fitting conclusion (with the exception of Dumbledore and Dobby the Elf), every horcrux had been destroyed and the Second Wizarding War had come to an end, Rowling announces there’s to be an eighth story (she’s also recently announced Cursed Child is the last of the Harry Potter franchise, but you never know). Only this time it was to be a two-part play (consisting of two acts each) and not a novel. But it doesn’t matter. For when you’re reunited with characters from your childhood, the nostalgia is so strong and the emotion so raw that you realise she could’ve written a sonnet with beetroot juice on papyrus and you would’ve still loved every word.

Harry Potter and the Cursed Child is a script where things are a little upside down. For starters, Harry’s Son, Albus (who, despite predictions, isn’t the only ‘cursed child’) gets sorted into Slytherin. And from an entire train full of children, he chooses to become best friends with Draco Malfoy’s son, Scorpius. It’s interesting that the kids have little in common with their parents, personality- wise. One would expect Scorpius to end up as the main villain (with a name like that, who wouldn’t). But he remains a steadfast friend, losing his tough-guy image altogether when he gives Albus a hug in the last scene. He also turns out to be head-over-heels in love with Ron and Hermione’s daughter, Rose, who’s inherited her mother’s sharp tongue.

Harry himself, contrary to what one might have expected of the shy, halting 11-year-old from Harry Potter and the Philosopher’s Stone, is a hot-tempered, overworked—and at times, rather overpowering—father. At the end of an argument, he tells Albus, “It’s only now I realise that I don’t need you to like me, I need you to obey me because I’m your dad and I do know better.”

There’s also the time travel to come to grips with since Albus and Scorpius (and later on Harry, Ginny, Hermione, Ron and of all the people, Draco) are constantly shuffling back and forth through different time zones. The time-turner eventually enables a spooky alternate reality where Voldemort lives, Cedric Diggory is a death eater and Harry is dead. It brings back Hermione’s warning from Harry Potter and the Prisoner of Azkaban, when a time-turner was first introduced as a way for her to attend lessons and later on, save Sirius Black’s life. “Professor McGonagall told me what awful things have happened when wizards have meddled with time.”

But even in this strange new world with its new rules and new friendships, there is plenty of familiarity. It’s always a delight to have a scene begin with Aunt Petunia complaining about unclean pots and greasy glasses. Then there’s Professor McGonagall, who couldn’t care less if Harry and his friends are all grown-up now, “If I could give detention to you, Minister, I would. Keeping hold of a Time-Turner, of all the stupid things!” Moaning Myrtle also makes an appearance (“Isn’t everyone so naughty”). Unfortunately, so does the hateful Dolores Umbridge who informs Scorpius of Harry’s death and then accuses him of “..upsetting the dementors and entirely ruining Voldemort Day.”

But the most welcome scene of all, one that every fan would have been waiting for, is where Harry speaks to Dumbledore’s portrait. It may not be with the real person, but the exchange is as poignant as ever. The play would’ve felt incomplete if the beloved grandfatherly wizard hadn’t been there to offer advice one last time. It’s a conversation about love that he shares with Harry. One where he tells him through tears, “I couldn’t see that you needed to hear that this closed-up, tricky, dangerous old man…loved you…”

In the final scene, when Harry is finally able to share the same close bond with Albus, his son (‘He touches his son’s shoulder. And the two of them—just slightly—melt together’), we realise that what makes Harry Potter’s world truly magical, and why 400 million copies of the books have sold till date, is the love (from family, friends, strangers and even enemies) that fills the pages.