Maggots in the Mind

Khalid, the protagonist, after over a year of being thrown into an isolation cell at Guantanamo Bay. 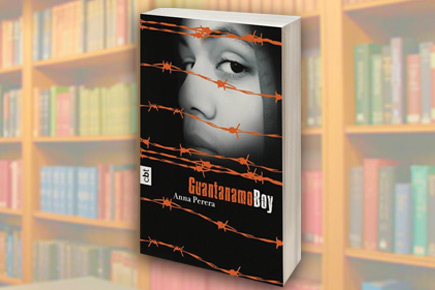 Khalid, the protagonist, after over a year of being thrown into an isolation cell at Guantanamo.

Khalid nods, pretending not to be a bumbling idiot. Then he takes a deep breath, thinking, He’ll be back in ten and I have to eat this up, otherwise they’ll… He doesn’t know what will happen if he doesn’t eat the cold tinned potatoes, one after the other. Then the peas, one after the other. Then the…it looks like fish, but it smells like stinking cabbage. He’ll be back in ten and then—what?

So Khalid stands there, tray in hand. Waiting for the man to come back. Refusing to sink into the white space or listen to the voices until after—yes, after the sound of footsteps disappears down the corridor. Refusing to believe in the white space that he’s already in. Seeing it over there. Not here, next to his shadow.

When the prayers begin from every corner of the camp, Khalid’s mind starts up for a second with the thought that maybe they’ve given him the wrong number.

Rubbing his forehead with his free hand, he bursts into tears.

His number is 256 and he knows now they’ve given it to someone else, because no one’s called his number for a long time. So something must have happened. They used to call his number for showers. A soldier would shout, ‘256! 256!’ Khalid would know then they were coming for him. Then it all stopped. Or did it?

‘256!’ Khalid yells to remind them, just as the beany hole slams open and another man, not the one with the kind eyes, grabs the tray.

‘You’re stinking the place out!’ he barks at him. The beany hole snaps shut. Khalid listens to black boots march on. Holes banging open and shut, on and on down the corridor. The sound of plastic trays clattering on the trolley. Then it all stops and the smell of urine takes over…

…Only when he hears the air conditioner click off does Khalid blink himself back to sitting on the bed. The blue blankets are on his shoulders. White towel on his head. Watching the jinn fall down…

Leaving him with only the ash-coloured walls, plus the sound of someone being dragged past the door, shackles scraping the floor. And then the unbroken noise of a man screaming, which has been going on for hours and is beginning to make Khalid feel he should join in.

There’s something strangely soothing about the thought of screaming his head off. Anyway, it’s better than listening to the yelling. That gets on his nerves. His mind becomes a flickering video camera, recording the screamer’s pain, hunger, desperation. He can see him pacing the room, banging his head on the wall, biting his arm. Waiting for something to happen to break the monotony of wondering how everything went wrong.