Love Stories Are Not Straight

This queer anthology questions labels such as ‘straight’ and ‘gay’ and, among other things, addresses the complications of love 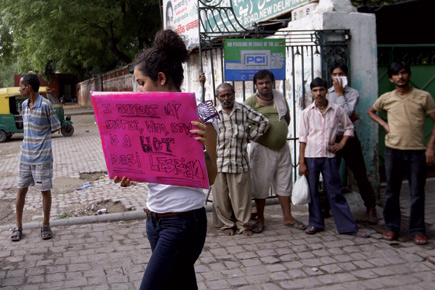 This queer anthology questions labels such as ‘straight’ and ‘gay’ and, among other things, addresses the complications of love


To mark 2 July 2009, news channels were airing interviews with LGBT activists, artists and ordinary people who were negotiating the terrain of coming out. On that historic day, the Delhi High Court had struck down a colonial-era section of the Indian Penal Code that held consensual same-sex intercourse to be a criminal act. In its decision in the Naz Foundation vs Government of NCT of Delhi case, the HC read down Section 377 as hostile to human rights, Indian tradition and principles of inclusiveness. This meant that cops around the country could no longer use the draconian law to hassle LGBT individuals for duty, fun or profit.

Like many of the straight folk tuned in, I called the ruling a ‘milestone for democracy in India’—and immediately knew I had used a clichéd phrase. The country had shifted a millimetre towards inclusiveness, but I couldn’t feel the movement in my bones. The historic development was not part of my experience, but I found myself wishing that I had gay and lesbian friends whose feelings I could intuit directly.

Then, in early January this year came the news that a Mumbai-based publisher had released Out! Stories from the New Queer India, an anthology of LGBT-themed stories. It made for memorable reading—delightful, eye-opening, and if the occasional passage raised my eyebrows, it was likely a result of my own biases, since I was reading LGBT stories for the first time.

Out! is one of the LGBT-themed anthologies that have come out since the reading-down of Section 377. It is edited by Indian-American writer Minal Hajratwala and published by Queer Ink, a Mumbai-based publishing house and online bookstore for LGBT-themed writing. The writers are a mix of full-time and part-time writers, LGBT activists, arts-related professionals and academics, all connected in ways direct and indirect with the LGBT scene. Though many of the contributors are lesbian or gay, some ‘decline-to-state’. One calls herself gender-fluid. How that intriguing non-label is different from ‘queer’, I don’t know. The anthology itself is category-fluid, you might say, bringing together drama, tragedy, farce, satire, fantasy, sci-fi and noir. Explaining the need for this anthology, Hajratwala says, “There is very little in the contemporary space, and especially very little that speaks to lesbians, to transgender people, to bisexual people, not only gay men. Since the Section 377 verdict in 2009, the Queer community in India has evolved and taken on a more visible presence. More people are comfortable being out of the closet, and external perceptions, via the media, have also broadened and changed. We wanted a book which represents and stands for these changes and with stories told by Queer people themselves.”

Out! questions the labels of ‘straight’ and ‘gay’, making the point that human realities defy easy categorisation. For the most part, but not exclusively, it addresses the complications of love. Coming from LGBT communities, it does not stereotype the characters. Hajratwala says, “We (herself and Shobhna Kumar of Queer Ink) tried to limit the stereotypical picture of the Queer community; certain issues such as lesbian suicide have been written about quite a lot, so we wanted to make sure we offer a more diverse and balanced picture.”

Hajratwala is referring to ‘A Small Town Girl’, a story by Milind Wani in which a journalist, who is lesbian, comes to a village to report on two teenage girls. They were forbidden to love each other and committed suicide after attempts were made to marry off one of them. The story of dead lovers is not told as a classic tale of doomed lovers, but is layered with the journalist’s experiences with her own girlfriend, who has declined to commit to her. The two layers of the story juxtapose two flashpoints: same-sex love versus tradition, and commitment versus a narrow conception of personal freedom.

Hajratwala continues, “If they did have a familiar theme, such as coming out, then I was looking for an element of differentiation: a twist in the tale, a particularly compelling character, a unique setting, or a narrative voice that sets the story apart.”

Out! has a number of lovemaking scenes. When you consider that the book is intended for a general audience, this question presents itself: how do you read them if they can’t arouse you? I read them for craft, of which there is plenty on offer. To my surprise, I was able to read the gay sex scenes that way too.

Bar one scene. This was the gay sex scene in ‘Crocodile Tears’ by R Raj Rao. This is what happened as I read it. ‘Our high-energy lovemaking frequently left me with a sore ass, but I bore it stoically.’

Next line: ‘This thing… was not just a body thing but involved feelings.’

‘I did not howl when he used his dick like an enema to draw the shit out… I merely gave him a hand-towel and asked him to clean me up, which he tenderly did.’

Here, too, the awkwardness doesn’t come from the depiction of a male couple making love, but because shit and sex is an unsettling combination, no matter what your orientation.

Actually, this story stands out for its depiction of complex and tangled relationships. The narrator loves a man and wants a relationship with him, but he seems to want only occasional intimacy of the physical sort. He goes on to marry and father a child, which breaks the narrator’s heart. In time, the narrator is drawn into a bond with the lover’s family, his son in particular. Further, the lover becomes infected with HIV and the narrator has to cope with the pain of bereavement. More pain comes his way: since he has become a sort of father to her son, the mother wants to come closer to him.

Another story must be mentioned by name, ‘Nimbooda Nimbooda Nimboodaaa’ by Ashish Sawhny (Ismat Chugtai’s grandson, by the way), which features a wonderfully tragic heroine with a twist, Queen Aslam. Aslam is as histrionic as a Bollywood leading lady of yesteryear, and is especially funny as he heads to confront his lover, the dastardly two-timer who has been courting a girl. A veteran of suicide bids, Aslam has swallowed an overdose of sleeping tablets which brings on his Meena Kumari-esque collapse right in front of his lover near the Gateway of India. Aslam’s friends rush him to a hospital to have his stomach pumped, but first they have to prove his male-ness to the doctors in a sadly crass way.

I got a clear sense that Aslam’s isolation and victimisation is society’s fault, but his relationship problems are of his own making. As the old haikuists would say, ‘Bitter it was, but also funny.’ For its tragicomic flair, ‘Nimbooda’ could find place in any anthology, not just an LGBT-themed one. A very controversial story is ‘The Madras Miscellany, Unedited’ by Srini Satya, because it explores a theme that pretty much no one has dared to touch till now: an adolescent boy having sex with his bisexual uncle. I couldn’t yell “Child sexual abuse!” because it is the boy who initiates sex on a number of occasions, without feeling traumatised or exploited in the least.

As Hajratwala writes in her introduction to the anthology, ‘… we crack open the almirah to give you a peek. Come in, look around.’ That means questioning the meaning of labels we apply to what we have not lived.