Let There Not Be Light

The dark formalism and plaintive elegance of Vikram Seth’s poetry 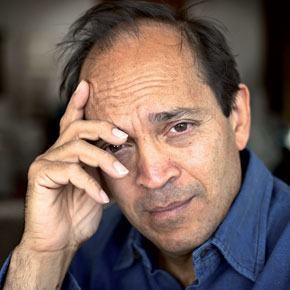 Vikram Seth’s Summer Requiem has a decidedly autumnal feel, for in his well-wrought and plangent latest collection, we find the poet looking back over the span of a life with detachment, acuity, even a heady dose of scepticism. Seth has always been a master craftsman and these poems are no exception, as they seem spawned from a lineage that springs directly from Matthew Arnold to Philip Larkin to the Neo-Formalists, bypassing the Martian school, the avant-garde, and perhaps the self-indulgent practitioners of vers libres. Seth, even at his most melancholic, is stately and dignified, laying his masonry of line and verse with precision against the ravages of time.

In the long title poem sequence, which begins the book, the themes that will be played upon are laid out: there’s the ‘shell of forgetfulness,’ ‘jaggedness and discontinuity,’ the speaker ‘forever waking in a lost country’. Memory, in this poem ‘is a poison’ and ‘perpetual replacement is the only song of the world.’ The opposite of aubade, meant to rhapsodise the coming day, this serenades endings, how a once intimate landscape is shorn of personal history, the town indifferent, the tracks rusted and wild grass reclaiming the brick. This poem threatens to tip into saccharine despondency, that Arnold-esque tremulous slow cadence of eternal sadness— and does so in a couple of places, like when the speaker generalises how ‘the liberated generation lives a restrained youth’—but for the most part, it manages to avoid this fate, moving us subtly to quietude and retrospection by the end.

Ultimately, however, I much prefer the shorter lyrics of love and loss that follow, for their compression and diction feel far less stilted, far more impacted and impactful, like the pitch-perfect The Shape of Things, which sifts through a litany of objects, real and imagined, changed through contact with the now-departed beloved, and changed further through memory. The last stanza begins, ‘Things that are here and were before, / These too are altered at the core’; and it ends, ‘Even these hands, that felt your touch, / Though much the same, have altered much.’ Each time I reread that poem, I feel that upwelling of pleasure and the rightness of the sentiment and its marriage to the music of the syllables.

One of the masks Seth chooses comes in the form of three translations that comprise the middle of the collection. Two of them are by that brilliant, hermetic Giacomo Leopardi, the early 19th century Italian poet and scholar, who was a gobo, or hunchback, in ill health and slowly losing his sight throughout the course of his life. Seth translates Leopardi’s L’infinito (‘The Infinite’) and Alla Luna (‘To the Moon’), as well as a sonnet by Pierre de Ronsard, the 16th century French aristocratic poet. These are apt selections for this collection, for these classical poets sketch an extremity of emotion that Seth’s own poems can orbit safely.

But I’m also struck by the choice of these two noble, entitled figures, and the kind of criticism that Neo-Formalist poetry received in America from such figures as Diane Wakoski, who in an essay entitled ‘The New Conservatism in American Poetry’ equated traditional literary forms with political conservatism, and Ariel Dawson, who in an essay called ‘The Yuppie Poet’, accuses the movement of resurrecting elitism. These are hyperbolic criticisms, and yet retain a semblance of truth when reading Summer Requiem, for there’s a certain starch and aloofness in the language that make us feel like the poet abides elsewhere than in the metrically precise lineation and leave us longing for some more of the jaggedness and discontinuity that was promised in that first poem.

There’s a striking gravitas and maturity in this collection that feels like a real triumph, alongside a playfulness that produces some concrete poetry, a villanelle about the difficulty of rising each morning, two tercets to the parsnip, and even a self-reflexive witticism that looks back at some of the poet’s own work, like The Golden Gate, that classic novel- in-verse written by Seth nearly 30 years ago. In many ways, this book feels like a preparation, a leave-taking, an exam- ination of one’s changing body and mind in light of ever- elusive memories. ‘Let there not be light,’ the poet wishes in his poem Dark, but then, the book concludes with an ‘unedged knowledge of love’ and ‘new light’ dawning in its own time. That, in the end, is the truest requiem for summer.

(Ravi Shankar is the founding editor of Drunken Boat, author of several books of poetry and a professor at Central Connecticut State University)