Here comes another Bangladeshi expatriate author in English who easily qualifies as one of the finest from his country. 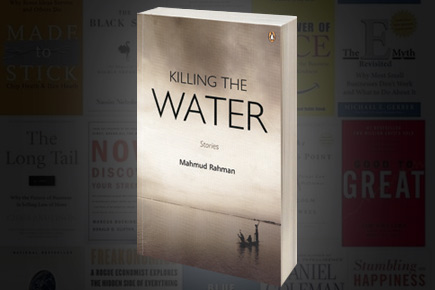 Here comes another Bangladeshi expatriate author in English who easily qualifies as one of the finest from his country.


Mahmud Rahman, in his first book, Killing the Water, brings along a series of fluidly narrated tales packed with displacement and nostalgia.

Not surprising, considering the author’s own real-life travails as a revolutionary during the upsurge of the late 1960s that led to the creation of Bangladesh, as a refugee of the 1971 war in Calcutta, or his jobs as a factory worker, data entry operator, community organiser and database support techie in America. That was before he shifted to solely writing fiction in the early 1990s. It took him 10 years to bring out his first book.

Rahman’s stories, all 12 of them, have backdrops as varied as the lingering smell of dried fish curry accompanied with the thud of a wooden spoon against a clay pot in Modhupur in the 1930s’ east India, to the sudden blast of hot air that fogs one’s glasses when you enter a laundromat from the winter chill of Providence in Rhode Island.

In between, there are stories set in the years of insurrection and war in Bangladesh. In Kerosene, a striking tale that opens with a violent paragraph, a revolutionary is in conflict with the sudden upheaval of war and circumstances that lead him to commit a heinous act.

The second bunch of stories begins with migrants in the US, the war fresh in their memories. In Orange Line, we stop in Boston in the 1970s, where a graduate student from Bangladesh faces a racial predicament. A sense of preservation seeps into the title story, where a mother uses her bottles of holy water to cleanse a polluted pond. From there, we move to 1980s Detroit, where a Bangladeshi ex-soldier confronts his ghosts while flirting with a singer in a Blues club. The book closes with second-generation immigrant stories that connect the past with the present.

If you’ve been lapping up contemporary fiction from Bangladeshi authors, Rahman is not to be missed.