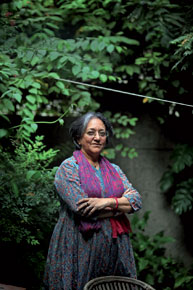 There are various quotations that come to mind while reading Manjula Padmanabhan’s latest novel. The first is Jean-Paul Sartre’s ‘Hell is other people’, in this case pretty well all the people on the planet. Then there is Bishop Heber’s phrase ‘and only man is vile.’ Finally there are the words of the famous biologist EO Wilson that I heard in a recent interview. Commenting on the cause of the self- created problems our species face, he described the human race as having “a Paleolithic nature and God-like technology”. This novel lays bare our Stone Age nature only too well, and its characters live in a world where God-like technologies appear successful only in inventing different circles of hell.

The Island of Lost Girls is science fiction, the sequel to Padmanabhan’s previous book Escape. The acknowledgements hold a clue to the arduous and intense creative process that led to the construction of this complete other- world, rooted in the 21st century’s disharmony and disbalances and particularly in the oppression of women, an issue that is one of Padmanabhan’s chief concerns. By her own admission, it took her five years to complete this novel, retiring to a tiny flat in Rhode Island in the United States and living there alone with her growing manuscript for company, discussing her work with no one, no matter how close to her.

No wonder then that every aspect of this world has been imagined with such care and precision and is portrayed in such vivid and sensual detail. Sounds, smells and tastes, as well as extraordinary visual description make this novel a 4D sense-surround experience. Padmanabhan has long experimented with the futuristic, including in her award-winning play Harvest, the story of an organ donation industry, but the brutality and invention of this new world is on an epic scale. The characters that populate it range from the demented and irretrievably cruel to ones of complex shades, and command the reader’s attention.

Her previous novel Escape introduced the reader to a region of this world and to Meiji, a girl whose name breaks down to ‘Me, I’ and the honorific ‘ji’. Her story continues in this book, where to find herself, to have some control of her own mind and actions is a struggle fraught with danger. The pressure on individuals to submit is immense. Born secretly in a country where all women were exterminated as vermin, and clonal reproduction and sex-pleasure with transsexual males replaced what men saw as the principal female functions, this last and only girl was protected by three uncles, known as Eldest, Middle and Youngest.

This novel takes up the story as Youngest, carrying an unconscious Meiji in his baggage, crosses watery borders into the part of the world that ostracised his own for its extermination of women. Therefore it is as unfamiliar to him as it is to the reader, whether the undersea travel, or the vertical living in a city suspended over a breach in the earth’s mantle caused when eco-terrorists set off nuclear bombs. This also means that this is a book that can be appreciated even if you are unfamiliar with Escape. Ironically, even here women are sexually abused and tormented. When broken, disfigured and scarred, there is only one possible refuge for them. These are the ‘islands’ where they can be restored, where to some extent they can be safe. But these islands are not islands in any conventional sense and Padmanabhan has taken great leaps of imagination to create these luminous and mysterious enclaves. Youngest’s aim is to protect Meiji but he is enslaved to the purposes of a man with a much more sinister agenda. For this, his body has been reshaped as a transsexual’s.

In this post-apocalyptic world, bodies are routinely redesigned, rewired and cloned. There is lust and sex but little love, compassion or self sacrifice. Therefore these qualities take on great importance whenever and in whomever they occur during the fast-paced twists and turns of the plot.

Here and there Padmanabhan makes a nod to JRR Tolkien, and there are also touches of humour, for instance the idea of a ‘cement rot’ disease that leads to global urban collapse. As the book races to its denouement, she deliberately leaves loose ends untied, indicating that there could be another volume in the offing. However it to be hoped that the next in this gripping series will take less than five years in the making.