This book will not overthrow capitalism, but mounts a critique that deserves a read 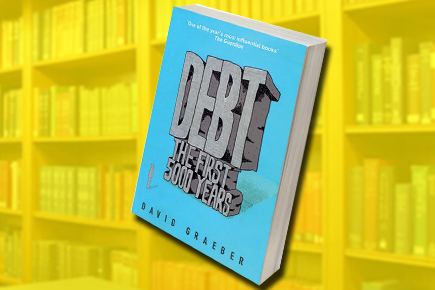 This book will not overthrow capitalism, but mounts a critique that deserves a read


Of late, the concept of debt has had angry words being hurled across an ideological gulf in the West. It does not happen all that often. In spite of the Great Recession, most minds there are already made up on matters of money. Does debt—karz—denote a civilisational divide too? This question is what draws me to Debt: The First 5,000 Years. Graeber has no explicit answer to offer, but I owe him at least this: if not for this book, I wouldn’t have known of Australia’s Gunwinggu aborigines who hold ritual sexfests at trade fairs with women just as free as men to make propositions.

What equality activists owe Graeber is the slogan, ‘We are the 99%’, coined by him for America’s Occupy Wall Street agitation. What he thinks he owes the world is an explanation of what’s wrong with it. He speaks as a professor of anthropology, which, unlike twisted history, is not always bunk. ‘We did not begin with barter, discover money, and then eventually develop credit systems,’ he says, ‘It happened the other way round. What we now call virtual money came first. Coins came much later, and their use spread only unevenly, never completely replacing credit systems…’ Debt was not the outcome of money, he says, money was the outcome of debt—or of a need to keep track of who owes who exactly how much favour, a need that sprang from a primitive form of communism: ‘from each according to their abilities, to each according to their needs’. In that sense, debt is the economy’s originator, its original sin if you will (even if Graeber is clear it is not one). Even today, a currency note is essentially an IOU, a promise-to-pay.

So far, so plausible. This book takes a wild turn in its charge that the real origin of money has been hushed up as a free-market plot by thinkers like Adam Smith, whose 1776 portrayal of prices being under the guidance of a ‘divine hand’ is traceable to Arab hearsay a millennium ago. It is true that Al-Ghazali (1058-1111 CE) can be called the world’s first market economist, and that Adam Smith echoed much of what he said, but so what?

Well, Graeber’s central thesis is that civilisation has alternated between long phases of peace and trust with credit systems well in place and of violence and strife with bullion acting as money. He makes this case quite convincingly: the First Agrarian Empire (3500-800 BC) used virtual credit; the Axial Age (800 BC-600 CE) created coinage; the Middle Ages (600-1450 CE) went virtual again; the Age of Capitalist Empires (1450-1971 CE) re-adopted bullion; and the current era, having dumped the Gold Standard for dollarisation, is still to be shaped—away, he hopes, a lot less convincingly, from the clutches of capitalism.

This book is at its most forceful—and faulty—on the Middle Ages, led by Baghdad. Granted, its Bazaar motive might have been mutual aid, not money, as consistent with an Islamic ban on usury (business risks were shared, not priced), but were the Bazaar and Mosque in good alliance against a bad State? To suggest so, he speaks of an Abbasid army of ‘slaves’, but as a leftist radical who sees slavery even in a modern 9-to-5 job, he sounds enslaved by his own fudgy logic here.

Graeber’s basic target of attack is a usurious version of that set-up—led by Wall Street and secular by design but twisted by money as its motive—with a bad Market up against a good State. Graeber’s fixation with this face-off stunts his argument and leads him to a Marxist folly that foresees capitalism as a victim of its own success, frothing over with financial bubbles that burst with worse effects each time. Is this inevitable? After all, Karl Marx echoed stuff that had been said a thousand years earlier, too, and even lost his fizz in a way that was not too original. As a theologian, Al-Ghazali espoused an Ashariya fatalism by which misled believers came to shirk responsibility for their destiny, passing it upwards as a job assignment for the ‘divine hand’ and ultimately suffocating the rationality required of intellectual enterprises like science. As a theorist, Marx assigned human agency such a scrappy role that misled Marxists came to lose their dedication to the truth as individuals, ignoring how factors like information and imagination shape an economy and ultimately failing the cause of equality. The latter’s atheism does not nullify the parallel.

We ‘the 99%’—even at satisfying 6-to-9 jobs—do have a valid grouse. But this book only interprets the world. It won’t change it. Just as well. We could do without another idle dream that has no relevance even if it’s inspired by an iconoclasm that does.