Mommy memoirs are no longer about bringing up children 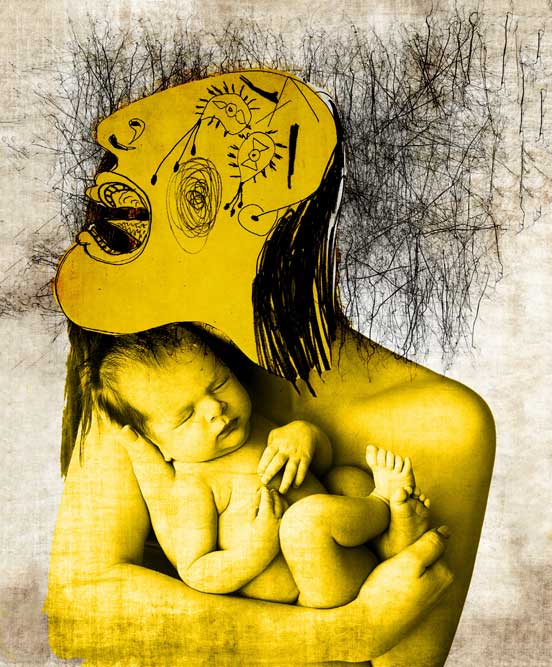 FEW BOOKS ON parenting will open with the words: ‘Motherhood is a bitch,’ and then go on to provide anecdotal evidence supporting that statement, stage by stage, chapter by chapter. But development professional Amee Misra’s debut book Stop Licking My Arm and Other Mommy Rants from the First Three Years (Juggernaut) doesn’t beat around the bush. She pulls out hilarious, unflattering strands from her modest experience of three- and-a-half years as a parent and makes a memoir out of it. I began reading it with some scepticism, because, honestly, mommy rants can often become tedious even to a mother herself. A couple of pages in, I couldn’t help but chuckle fondly at the familiarity of some of the situations the author found herself in, sprinkled with humour to provide relief between the rants. ‘There was so much happening after my son was born, all of it new, most of it comical, and so overwhelming that I felt like it was an out-of-body experience. A reader who isn’t a mother will probably roll her eyes at what I have written, and think—‘It can’t be that bad’. But someone who’s been there will get it.’

Delhi-based Misra tells me she wanted to write about stuff no one was writing about: travel nightmares with toddlers, “the near-conspiracy of silence that precedes childbirth”, the lack of “devastating, soul crushing, overpowering” love for the baby at first sight, where likely “the most overpowering memory of the first few months of motherhood is one of utter confusion.”

If as a parent you have often muttered uncharitable things about your offspring, wondered how to wade the muddy parenting waters without the village, been endlessly obsessed that you are not doing enough to be a Nobel-worthy parent (for Peace, of course), well, say ‘hello’ to the new parenting memoir. Warning: hysterical descriptions of the first few years up ahead!

Like Misra’s book, Babies and Bylines: Parenting on the Move (HarperCollins) by journalist Pallavi Aiyar doesn’t sugarcoat a single experience. ‘Keeping it real’ takes on melodramatic proportions. Sample: ‘It was 3am as I grimly shook the rattle, limp-wristed with exhaustion. Meanwhile, the red-faced monster I clutched with my other arm showed scant signs of any tiring as he screamed into the night, with facial contortions that rivalled Edvard Munch’s darkest depictions.’

Humour, they say, often softens the blow. It certainly does wonders for a mother trying to keep her head above water, and Mumbai-based Tina Trikha, mother to three-school-going children and a corporate professional, recognised this when she decided to put her own spin to the sanitised but ever-popular parenting bible What To Expect When You’re Expecting. Her own amusing version What I Didn’t Expect When I was Expecting (Rupa) is a lot more light hearted and provides less ambitious parental skills, with short, snappy chapters dedicated to ‘Drowning in Advice’, ‘Finding the Right Nanny, and Then Being Jealous of Her’, ‘Sleep: A Rare Luxury’, ‘Infatuation with Bodily Excretions’ and so on. Amy Chua’s record-breaking parenting roar Battle Hymn of the Tiger Mother gets a local twist too, in Shunali Khullar Shroff’s cheeky Battle Hymn of a Bewildered Mother (Hay House), which is less about terrifying her two girls into perfection than it is about dealing with fancy birthday parties, the pressure of having to morph into an out-of-character baker mom, and saving the offspring from turning into mini Paris Hiltons by an overindulgent father. ‘Maybe Paris Hilton is misunderstood and I have just been paranoid. Maybe two more Paris Hiltons won’t hurt the world,’ writes the Bewildered Mother.

If as a parent you have muttered uncharitable things about your offspring, wondered how to wade the muddy parenting waters, well, say ‘Hello’ to the new parenting memoir

THESE MEMOIRS, part of a flood of fashionable new mommy lit in the last few months—including Shivangi Sharma’s I Made A Booboo (Rupa), Madhuri Banerjee and Rohini Tiwari’s frothy The Flaky Mummy (Rupa), Kiran Manral’s witty Karmic Kids: The Story of Parenting Nobody Told You (Hay House)— indicate a provocative, shifting narrative in parenting discourse, one that publishers are keen to catch. Expert-led parenting books are still being churned and consumed, but intimate, personal stories are all the rage today. Can a book by a child psychologist prepare you for an exasperating situation in the middle of a park? Seldom. You’re never, even after a dozen parenting guides, fully prepared for what parenting throws at you. But you can, with a mug of (reheated) coffee, chuckle over a familiar conundrum another mother narrates, all embarrassing details intact, in a memoir that could seem creepily similar to your baby-filled days. ‘There is an increasing need for mothers to express themselves. Societal expectations for mothers are much higher, and also the need to have the space to vent,’ says Trikha.

Mommy wars on parenting style continue to rage, but this much is agreed upon: motherhood has never been more complex. Or more confounding. Or as controversial. Or as overwhelming. With mothers straddling more roles than ever, with one foot in and one foot out of the house, never quite fully here or there, complexities are aplenty. I found it especially refreshing that some mothers are now willing to write openly about their own lives, warts and all, with honesty and without fear of judgement. They are tipping the balance from baby- centric parenting tomes to narratives that focus on the identity of the mother.

Today’s mommy memoirs offer something for everyone. The Flaky Mummy, the quirky guide to surviving motherhood will tickle the drowning-my-sorrows-in-a-beer mommy. The tone of these six short stories written by unnamed women ranges from satirical to naughty. Each story is followed by a quirky cocktail, for example, Cherry Bitch to Crouching Tiger, and a good number of pages at the end of the book are dedicated to more cocktails in case you are having a particularly bad day. If there was a special mommy bar in town that looked like a book, it would be this. The stories themselves range from one about a socialite who has a baby just to show off as her latest accessory in snazzy photo shoots (‘Babies are the new Chihuahuas’) to a thoughtful one about a first-time mom in her forties who is often mistaken for her baby’s grandmother (‘So when someone asks, ‘What parenting style are you adopting?’ ‘Barely coping parenting style,’ I reply’).

The blood, the blood! It was a miracle I didn’t pass out from the sight of this little creature they said they’d pulled out of me

While these books might not rank high in literary quality, they ace the candid box. Pallavi Aiyar’s continent-hopping Babies and Bylines stands out with its writerly touches, and certainly raises the bar with her searing, observant portrait of a professional caught unawares in baby land. Struggling with breastfeeding, a colicky baby, sleep issues and then a second baby through China, Belgium, Indonesia, she maps her own journey in a larger cultural, social and political context. Her notes, punctuated by strong opinions, is backed by research, making it, in many ways, a handy, insightful, if breathless, read for even non parents. Mommy rants apart, the questions she raises are certainly relevant to a larger audience. She writes of the unsettling differences in her husband’s and her own approach to parenting: ‘Biology had already twisted our once symmetrical marital partnership into a lopsided arena, heavily weighted on the female side. But what was the cause of this difference in the impact that the baby seemed to have on our brain (mine was occupied, Julio’s only partially visited), and hearts (mine was overwrought, Julio’s was not), and muscles (mine were coiled tense, Julio’s were just weary on their reduced six hours of sleep)? Was it nature or nurture? Therein, it seemed to me, lay a key conundrum for gender relations, feminism, public policy and parenting.’ The idea behind writing down her story, she says, was to do ‘an anti-theory book. Something that was about the compromises that women and men make and argue about; about imperfect feminism and the politics of the quotidian….’ While Aiyar captures the need for men to join this conversation, and illustrates effectively her husband’s role in her parenting story, the father makes only a guest appearance in most of the other memoirs.

Tina Trikha’s What I Didn’t Expect…. similarly deals with finding that elusive balance; she remembers an undercurrent of bitterness in a discussion with women who left challenging jobs to be with their children. ‘Bitterness at having believed for years that we could have it all and then waking up to the harsh realisation that it wasn’t true…. Once you have a family of your own, you realise that something has to give. It just isn’t possible to have it all.’

On the face of it, many of the memoirs straddle similar dilemmas: the nerve-wracking pregnancy test, the debilitating pregnancy-induced nausea, the delivery room horrors and just how unnatural the very ‘natural’ process of childbirth turns out to be, the nightmare of exclusive breastfeeding….and the chaos that follows an ominous beginning. Not to mention dealing with mothers and mothers-in-law and largely unhelpful relatives and well wishers. ‘Did I really make this wailing ball of flesh?’ Begins Kiran Manral’s Karmic Kids, busting the myth that a mom’s first look at her baby must be a magical moment. ‘So when they placed him on my stomach, I recoiled. The blood, the blood! It was a miracle I didn’t pass out from the sight of this little creature they said they’d pulled out of me.’ In I Made a Booboo, Amsterdam-based stay-at-home- mother Shivangi Sharma writes fondly of her neurotic mommy- brain that most Google-obsessed mothers will be able to relate to, and notes: ‘I had read somewhere that a woman’s mind is like an internet browser with multiple windows open all the time. I came to agree even more with this when I became a mom.’

By raising questions about modern parenting, by reaching out to new mothers and letting it be known that it’s okay to feel foxed and terrified and distressed occasionally (or even frequently) about what is supposed to be organic and magical, these books are uplifting in their own way. The grand takeaway, though? A happy reminder that under the cloud of How To Be A Good Parent, there’s always a nice big laugh to be had, every single day, with or without that cocktail.