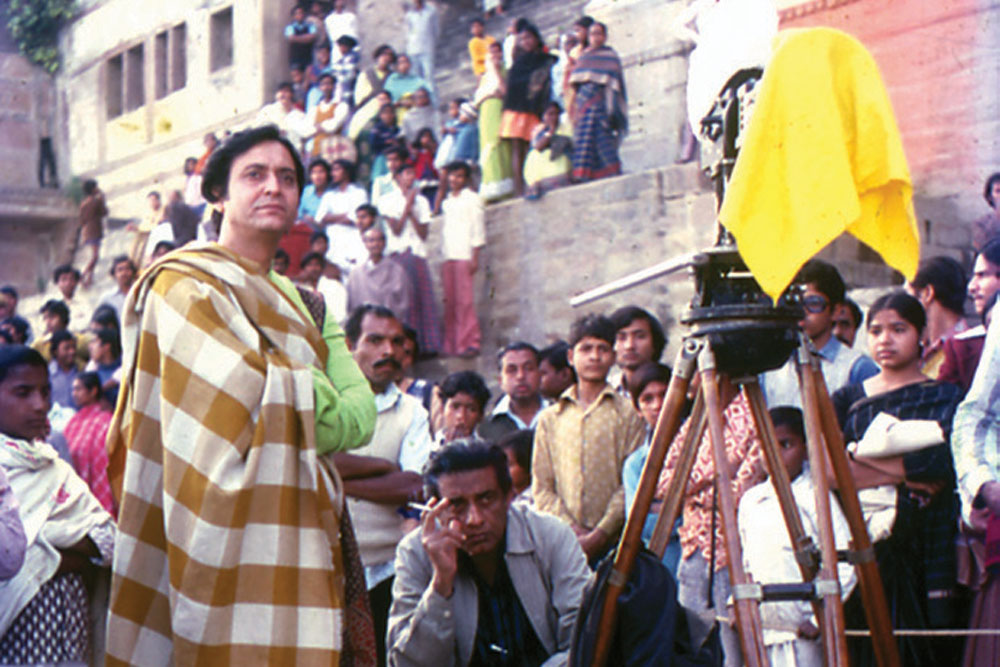 PERHAPS FEW OTHER characters in Bengali fiction stir as much sentiment in young and old readers as Prodosh C Mitter or Feluda, the detective character created by legendary writer-filmmaker Satyajit Ray for young adult readers.

Feluda first appeared in a 1965 story in the children’s magazine Sandesh. He went on to feature in a host of Bengali films, telefilms and TV serials, starting with Sonar Kella directed by Ray himself in 1974. The character turned 50 last year.

Feluda @ 50, curated and edited by Boria Majumdar, is in essence a tribute.

In his introductory essay, ‘Decoding Feluda: What Makes the Fifty-year-old Tick?’, Majumdar weighs Feluda against detectives from across the world whom Indian readers have loved. Sherlock Holmes, Agatha Christie’s Hercule Poirot and Miss Marple, British Inspector Morse and Swedish Kurt Wallander, and of course, the other popular Bengali detective Byomkesh Bakshi, are put through the scanner. He picks out the traits that make Feluda everyone’s favourite detective.

Majumdar writes, ‘Every Bengali, young and old, is a Feluda fan… We like that he is honest and intelligent, agile and courageous. We like it that Feluda is never outmanoeuvred and even when he is in a tight spot, manages to come up with the most innovative of plans to get himself and his associates, Topshe and Lalmohan-Babu, out of trouble.’ This direct, emotional outlook defines Majumdar’s approach to this charming if somewhat unevenly put together book.

Majumdar’s ‘Going Backstage with Feluda’ is an anecdotal account of director Sandip Ray’s trials and tribulations through the 1980s and 1990s as he attempted to get financiers to back the making of his Feluda films. Despite these films running to packed houses, producers would claim that they were children’s films and the lack of a love interest made them unviable. He also recounts the actual difficulties while filming and some interesting feats that the film crew managed to pull off.

The best of the pieces is Indrajit Hazra’s ‘Felu Mitter: Between Bhadrolok and Chhotolok’. Hazra proposes that Ray’s frustration with the socio-political clime of Kolkata in the 1960s might have inspired him to write a detective series for young adults, set in quieter, more scenic locales where a simple mystery—which would mean little in the chaos of Kolkata— could immerse Feluda, his companions and the reader. Hazra also points out how Ray’s own sense of unease with both the middle-class and the ‘lumpen’ class, finds its way into Felu Mitter, who deliberately evades being defined. ‘Feluda was the crystallisation of Ray’s unease with Bengali middle-class straitjacketing and delusional self-imaging, as well as with his natural distaste for the populist, the garish… the all too visible lumpen,’ he writes.

What Hazra mentions in his essay—that Feluda’s adventures were Ray’s escape route from the turmoil of the times—is explored in depth by Sovan Tarafdar in ‘Modus Operandi: Two or Three Things I Know About Feluda’. Tarafdar explains that while Ray engages with history or past-time deeply in his Feluda stories, he leaves the social upheavals of West Bengal in the 1960s and 70s completely out of the stories. This creates a sanitised setting devoid of all external troubles, save the crime that Feluda solves. The characters and plot are a law unto itself and hence manage to hold true for readers even so many years later, so far away.

Rochona Majumdar’s ‘I Want to be Topshe: Feluda and the Female Reader,’ in a lighter vein explores the character of the 14-year-old narrator, who is Feluda’s cousin and accompanies him on his adventures. Topshe could have been a girl, Majumdar explains, and is the medium through which female readers can relate to the all-male cast stories.

The back of the book includes interviews with actors, Soumitra Chatterjee, Sabyasachi Chakrabarty and Abir Chatterjee, who played Feluda over a period of 40 years.

The book’s flaw might lie in the uneven cobbling together of essays and the tenuous connection in their themes. The tone across the book varies from academic to anecdotal. What the essays do have in common is each writer’s personal affection for Feluda and his world. This makes for a warm, if eclectic, read.

Feluda @ 50, flaws notwithstanding, would make for an interesting addition to the quintessential fan’s library.