Five continents. Seventy five relatives. And an insightful journey, warts and all, to discover how we become the way we are. 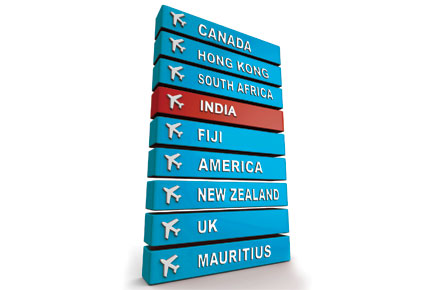 Five continents. Seventy five relatives. And an insightful journey to discover how we become who we are.


Who would have imagined that a woman descended from the illiterate, disagreeable shopkeepers of Fiji, would turn around and produce a book like this? Certainly not James Michener who apparently once wrote, artless but smug: ‘It is almost impossible to like the Indians of Fiji. They are suspicious, vengeful, whining, unassimilated, provocative… Above all, they are surly and unpleasant.’

Minal Hajratwala spent seven years travelling around the world researching this book, and interviewed 75 members of her extended family. Through their story we learn about the different phases of diaspora: immigration, segregation, apartheid, racial hate, new communities following old traditions and more.

In the Age of Imperialism, the definition of human was ‘man’ and the definition of man was ‘White’. Various theories explained the presence of ‘lesser’ races; they were his to educate and convert and use for his own needs. This definition weighed heavily on Indians on every continent they tried to settle in.

In South Africa, Gujaratis wistfully thought of themselves as near-White; perhaps because Khatris, second from the top in the caste system back home, were comfortable with their place in the hierarchy in South Africa.

In America, the teenage Minal was ruthlessly persecuted and didn’t realise until she was much older that it was a form of colour prejudice.

Even back at ‘home’ in India, when her ancestor joined Mahatma Gandhi in his famous march to Dandi, it was to be mercilessly trounced by those of a ‘superior’ race.

The men left home to earn their fortune. The women stayed behind. Overwhelmed by the poverty, oppressive mothers-in-law and the lonesome drudgery of their lives, they beat the children they bore mercilessly.

Minal was American, her brother Kiwi, her mother Fijian and her father Indian. Slowly, they all became American. The changes were physiological: when they visited India or Fiji they couldn’t drink the water, had to be careful what they ate, pollution bothered them. There were deep psychological changes too. But not so deep in her parents that they could lovingly understand the thing their daughter became.

Part research thesis and part private diary, the relaxed journalistic prose sporadically erupts into splashes of poetic expression. Its purpose appears part curiosity, part therapy and part revenge. It’s also a spectacular, self-conscious, exhibitionistic coming-out-of-the-closet of someone who announces herself to be something no one else in her whole community has ever claimed to be.

I enjoyed learning about the different migrant experiences. I admired the way in which the data was collected and analysed. But when I read private information about real members of Minal Hajratwala’s family, I found it distasteful, as one might if an author unexpectedly pulls down her chaddis and offers herself for inspection, and felt primly disapproving.