Yet another scholar’s grand take on India. But both theories and analyses read as if they are hot off the recycle bin 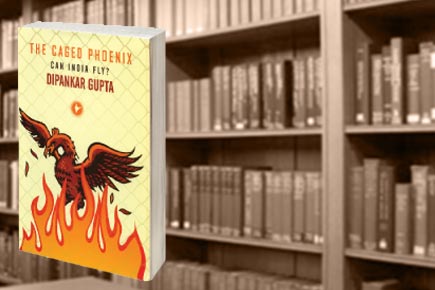 
The media explosion in India has produced a new kind of academic: the quote-a-minute scholar. On any given day, he will be visible on the edit page of a newspaper, a TV studio and an Internet chat room at the same time.

Gone is the old-school academic rigour. Clever posturing and provocative one-liners are all that matter today. One characteristic of this kind of professor is the US academic retreat he swings every now and then. Nothing like a few months at a think-tank in the Land of the Free, to get those ideas for analysing India and re-educating Indians. Dipankar Gupta’s book is just such an offering, emerging from a US think-tank called Woodrow Wilson International Center for Scholars.

The writing is not up to scratch. The title itself, The Caged Phoenix: Can India Fly, is a straight and not-so-imaginative lift from a famous Economist article, India: The Caged Tiger, which Clive Crook had written 18 years back.

The author cannot be blamed for lack of ambition, though. He has attempted a grand unifying theory of Indian sociology. So, as you read this ponderous page-non-turner, you discover culture is of no relevance when undertaking an understanding of India. This is not substantiated in any manner, nor is an alternative sociological framework that can stand up to academic scrutiny provided.  You are informed that the Indian middle class is actually very small, without any explanation of how India has one of the world’s highest rates of domestic consumption. There is a chapter on quotas that basically says that all those who deserve reservation have already got it. Never mind the evidence from polity and society in India that far from having run its course, reservation is critical to social empowerment and stability.

A chapter or two on agriculture offers the solution to the problem of the slowdown. Grow more cash crops, get rid of the Urban Land Ceiling Act and integrate agriculture with agro industry. If this sounds familiar, it should be. The US consultancy McKinsey&Company told us this in its famous report by Kito de Boer years ago. In a book with hundreds of references, this one is strangely omitted. The book has some nuggets that may, however, be of interest to the reader. Its analysis of the dangerous, counter-productive role NGOs play in civil society is penetrative.  It also contains an impressive bibliography. But these apart, there is little to take away from the book.

Academics today is a multi-million dollar business. Foreign grants, fellowships, travel opportunities and lavish project funds for the ‘study’ of esoteric topics have led to more quantity but little scrutiny. Publishers, too, have become far less discerning. The result is books like this, cliched with nothing new to say.