A workshop on how to write the soul stirring stuff has this correspondent choking at the broth dished out. With laughter, that is. 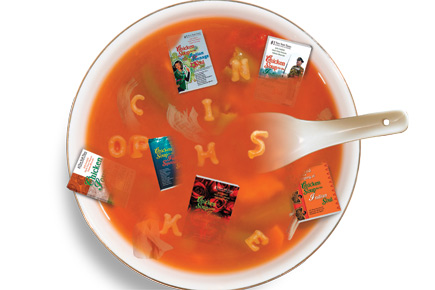 A workshop on how to write the soul stirring stuff has this correspondent choking at the broth dished out. With laughter, that is.


Did you know people don’t write books for more or less the same reasons that they don’t walk up to a hot brunette in a bar and ask her up to their room? They’re scared their lines are unoriginal; she’s probably heard them all, several times over. They think there’s no way in hell they have a shot. They’re scared of what people will say. They’re scared of being rejected, and above all, they think the ‘work’ is too big for them.

Did you also know that the solution is the same, ‘It’s not about Great English, it’s about an original line?’

You’d be mistaken in thinking this was the Indian chapter of a pick-up club; and for a woman to give insights to ‘the socially challenged’ is a boon. Tragically it isn’t, though Raksha Bharadiya’s reasons for people not putting pen to paper sound more like dating advice; actually, so does her solution. Comparing the chicken soup series to a hot brunette, though, is our ‘original’ idea of a joke.

Bharadiya is an Indian editor for the ‘Chicken Soup for the Soul’ series. The whole point behind the exercise is to inspire budding writers to pen their thoughts and share their inspiring life stories because “people will read your stories and be comforted” that they aren’t the only ones this has happened to.

So exercise No 2 (the first one resulted in dating tips) requires you to write down four of the biggest challenges in life, three people who have influenced you, and two things you’ve learnt about yourself. And just in case you have trouble starting, Ms Bharadiya shares her ‘cathartic’ (one of the three-and-a-half million times that the word was used over the next 53 minutes) story. She was taking a walk with her neighbour—a 76-year-old architect. While walking, they came to a stop before a bare tree, when her fellow walker turned to her and asked her if the tree reminded her of her life. It did, she thought. She was going through massive turmoil, but how would he know? He could read her, she thought to herself. Some months later, she took a walk with the same gentleman again. They came to a stop in front of the same tree, but she failed to recognise it this time. Her bare friend was now full of leaves, and that moment changed her perspective on life. She calls it ‘cathartic’, we call it spring.

Oh, and then there is another piece de resistance. So Ms Bharadiya was busy and out of town and returned to a household overrun by sparring domestic staff. She’d known something was about to happen, but she just hadn’t had the time. When she returned, the cup had finally runneth over and there was no one to wipe it up because they were too busy fighting and “not talking to each other”. Ms Bharadiya’s first response was textbook chicken soup material. “‘Why me,’ I thought, but then I realised we waste so much time and energy getting into the victim zone and playing victim. I could have just as well have interfered earlier and sorted out the problem before it got out of hand,” Ms Bharadiya shares.

Now, it’s time for the workshop participants to share. A gentleman in the front row wants to write a book; he’s just got over a medical condition, a bad relationship and being fired. We think he needs a counsellor more than pencilling a self-help book, but it would be rude and insensitive to interfere. Plus anyway, Ms Bharadiya is at her sensitive best. So how you start your story is, “My boss called me into my cabin and said you’re fired. I thought I was good at my job blah blah blah… I thought I was good and sincere blah blah blah and then go through a list of emotions that went through your head: self esteem, anger, life is unfair…and then, how I stood up for myself,” she suggests. Well, at least she gave the blah blah blah a bit of a rest.

A young girl wants to write about her late grandfather who had crossed over to India during the Partition. “Don’t write my grandfather’s struggles inspired me, write what they were. How they were different. How once you got into a brawl or had a bad score and went back to him for a story and how it inspired you,” comes the suggestion. This story may well find place in Chicken Soup for the Indian Golden Soul that Bharadiya is currently compiling. It’s all well that the girl’s grandfather had stories, but what his struggles in crossing the border and beginning life afresh has to do with inspiring her to not get into brawls is left delightfully vague. Priceless stuff, really.

But then, we can still relate to her. After all,  there are only so many ‘My pet’s death changed my life’ stories you can read before you turn off altogether. Anyway, there’s another lady on the wrong side of the hill who still remembers a teacher who helped her get over her childhood competition with her sister. But among the problems, a general consensus emerged. A scarily large number of people want to write life-changing stories about broken relationships. Only spurned lovers travel the earth and write books, it seems.

But there are other tips too, to writing your first book: keep a journal, use a thesaurus (a list of similar sounding, simpler words) to find simpler words, avoid cliches (leave really good bad writing to the masters), and figure out what made things different. Ms Bharadiya quotes Woody Allen, “80 per cent of success is showing up,” looks around, and then launches into another quote.

Those 53 minutes changed my life. Good writers and editors don’t make good speakers. In fact, to quote Seinfeld, “the fear of public speaking far outweighs the fear of death itself.” So people would rather be in a coffin than giving a eulogy. We understand it’s a tough task to conduct a workshop for people so clearly intent on sharing their misery with the rest of the world, but that’s the way it rolls.

Ms Bharadiya can, of course, get back at us by quoting the soppiest movie of all time Runaway Bride, where Richard Gere mouths this gem, “Journalism is literature in a hurry”. Ah, but what does that make the chicken soup?

I was bored dead. To top it all, she’d now started asking if anyone had any questions. The only thing that stood between me and freedom was courage. I mustered up whatever strength I had left, ducked under an enormous black speaker and walked hastily towards the door, ignoring all the voices including one that said, “Sir, that door is blocked”. Then in a moment, it was all over; I’d walked into a glass door mistaking it for a path to freedom—a happy place with green grass mustard fields and a place where poultry birds didn’t live in fear of being stirred into chicken soup. They died a more respectable death: namely as chicken tikka.

In one spirited moment, I was free from the Chicken Soup for the Soul workshop, a moment that was to change my life forever. Well, it did make me do something I never thought I would. I walked out, walked into Benetton, and  bought a suit.