Sounding the alarm against State Capitalism is pointless if you cannot defend the ‘authentic’ version. 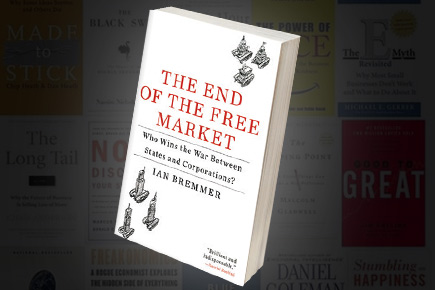 Sounding the alarm against State Capitalism is pointless if you cannot defend the ‘authentic’ version.


Nouriel Roubini, an economist who foresaw the Great Recession, has called this book ‘indispensable’. Now that I have read it, I wonder if he meant it the same way that India is America’s ‘indispensable ally’ now: a cue for canned applause and dumbed up laws.

Ian Bremmer’s The End of the Free Market is a post-9/11 book—9 November, that is, the fall of the Berlin Wall—to calm capitalist nerves in a post-Lehman world. The author is an expert on political risk, and he aims to rally forces of the Free Market against what he spies as its next big threat, ‘State Capitalism’. Practised by China, Russia and Gulf states, this means an economy that is neither enslaved nor liberated, but rigged by the State to pick winners—businesses that it owns and/or favours—who in turn help keep the same grubby gang in power. Just think of all the oil reserves under cobwebbed public control, he writes, a literal illustration of a ‘rigged’ set up. Bremmer’s great groan is that China’s ascent to influence and America’s lurch to statism have cramped the authority of the Free Market; and to have anything but free minds evaluate assets and allocate resources could doom the cause of prosperity on earth.

America, to his mind, is ‘indispensable’ to the noble mission of averting that horror, given the ‘hard power’ at its command to kick ass, keep oil flowing forth, etcetera. Being a nice guy, though, could ease Uncle Sam’s job of keeping the world order intact. So it had better let trade be free, stay open to foreign funds, let in immigrants, and so on. Hybrids like Brazil and India still need to be won over. Luckily, State Capitalism has little ideological appeal, so half the war’s won already (okay, turn up the applause knob)!

Now, now, now. Bremmer is quite right that free trade is not alien to the East, and he also does well to assume that intellectual coherence is crucial. But he is mistaken if he thinks that US-approved Capitalism shall escape scrutiny, post-crisis. Take ‘allocation of capital’. Why the dickens does debt draw upon such vastly varying rates of interest? Variation in risk is an incomplete answer. Surely, ‘sexiness’ counts too, a measure of one’s graphic conformity with an arbitrary idealisation.

As greenbacks span the globe, Uncle Sam sexes up, so a US-on-stilts gets cash loaned at negligible rates. Why, right here in India, there’s something supremely ironic in Tata Nano’s 20-year tax deferral; it comes in the shape of credit granted by Gujarat at an annual interest rate of 0.1 per cent! It’s ironic not because the car’s recently unveiled curves aren’t rated so well on the sexiness scale, but because Nano’s big idea was to be the little leveller.