Bombay in His Veins

Kiran Nagarkar was watching movies to put off writing, but ended up writing a novel set in Bollywood 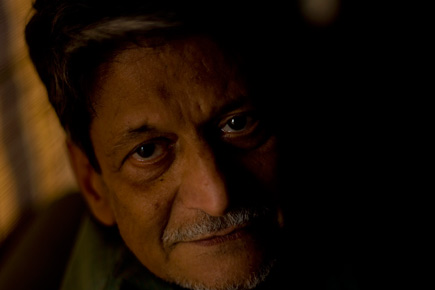 Kiran Nagarkar was watching movies to put off writing, but ended up writing a novel set in Bollywood


Just days before the launch of his new novel, Kiran Nagarkar keeps apologising for no reason. “Long trip down here, was it? Forgive me.” “Was it hard to find the place? Sorry.” “The tea might be too light, you might find it watery. I ask you to forgive me.” But then, it is never easy to make a comeback. Much has happened since Nagarkar’s acclaimed novel, Ravan and Eddie, came out in 1995—in 1997, he wrote the classic Cuckold, which won him the Sahitya Akademi Award, followed by another novel, God’s Little Soldier, which was received poorly. Now, the sequel to Ravan and Eddie, called The Extras *ing Ravan & Eddie, brings the two  loved characters back as young men trying to make a go in crazy Bollywood. Extending the Ravan and Eddie story, and writing about much-written-about Bollywood—no wonder Nagarkar is on tenterhooks.

Doesn’t it ever get easy, his being a star novelist and everything? “No, I don’t think novelists are anything special. No third eye on the forehead. It’s like any other job. It doesn’t get easier, and I procrastinate.”

In The Extras, Ravan and Eddie are trying to get a break in Bollywood. Why does the film industry interest Nagarkar so? “I don’t watch movies much, except to put off writing sometimes,” Nagarkar grimaces. “I haven’t seen anything recent. I quite liked Hazaaron Khwaishen Aisi. It (interest in Bollywood) must have been a subconscious preoccupation.” Nagarkar narrows his eyes. “The wonderful part about Bollywood,” he says, “is that it is, barring remarkable exceptions, shamelessly crass but unlike some foreign classics, its great saving grace is that it has no pretensions.”

Ravan and Eddie knock around in the film industry, and at one point they have to become movie extras—or as Nagarkar makes a character say, ‘The extras, the et ceteras, et ceteras.’  Getting into Bollywood without a calling card, so to say, Ravan and Eddie must rely on serendipity to be noticed by the powers that be, to land a big break. And at least initially, luck is in scarce supply for Ravan and Eddie.

Bombay emerges as a two-faced city; it feeds them and kicks their behinds. It encourages them to dream, while hampering their realisation. “Bombay is a difficult city. You have to do with dreams,” Nagarkar says. All through his works, Bombay is a cruel, primal force with the unexpected turn of tenderness.

In a city hard to live in, the daily grind can destroy family life, to say nothing of an individual’s spirit. That is the underpinning Nagarkar uses for Parvati and Shankarrao, Ravan’s parents. Parvati is a hard-working woman who curiously goes easy on Shankarrao, an advanced life form who has ‘given up work for higher pursuits’ such as reading a newspaper, lying in and snacking in bed. There are mostly two kinds of men in the novel, wastrels and workers.

Barring exceptions, the women uniformly keep their feet on the ground.

“It’s an archetypal pattern,” Nagarkar says about this singular pattern. “The men drink, make babies, and find another woman. They come back when they are fed up of the other woman. Meanwhile, the wife has to take care of seven or eight children on her own.”

Ravan and Eddie are in a third category of men—dreamers.

Uncharacteristically for the dark, bitter Nagarkar, this novel is sympathetic to dreams. The central problem for Ravan and Eddie is their lack of connections and their blue-collar background. Ravan and Eddie are surrounded by people who do not dream at all, or whose dreams have been crushed but have not wilted. At what point do dreams turn into delusions? “I guess Ravan and Eddie are a little delusional. You have to be, to make it in Bollywood.”

Ravan and Eddie keep hoping, and keep at being extras, financing their dreams with day jobs as cabbie and bar bouncer. This is why Nagarkar sympathises with them. “You look at an extra and immediately become condescending, as if they were some sort of sub-human species.”

This being a Nagarkar novel, Ravan and Eddie stumble through hilarious, absurd misadventures, and find that life is incomprehensible. Even doing the ‘right thing’ can have devastating effects on other human beings. Nagarkar deals with these insights with his trademark black humour.

The Extras is set in Prohibition-era Bombay, a city garnished with speakeasies in people’s living-rooms. “The aunties,” reminisces Nagarkar (a teetotaller, incidentally), speaking of the matronly, respectable women who ran the bootleg joints. “Men dressed in burkhas used to smuggle liquor in tyre tubes tied around their waists,” he says. “I actually saw that when I was living in Mahim,” Nagarkar says.

“My approach to story-telling is instinctive, it starts from deeply-felt preoccupations,” he says. What about research? “You have to decide whether you are writing a novel or a monograph.” he says. He offers another anecdote from the novel, where the would-be Elvis, Eddie, goes into a state of funk before his visa interview at the American consulate. Eddie backpedals, but not before pretending that he has already returned from America after cutting a successful record. “That kind of thing would actually happen, right there,” Nagarkar says, pointing to the American consulate visible from his front window.

In one scene, an irate bunch of people strips Ravan stark naked, and he walks 70 miles in the buff, only to be arrested for indecent exposure. Eddie contracts a curable but painful STD on an actress’ casting couch. Despite such tragicomic turns, Ravan and Eddie are lucky in Nagarkar’s eyes, and not only because they eventually succeed. “We have come to a point where we want to make money and money and more money. In that sense, Ravan and Eddie are very lucky.”

What they want to do, of course, is become actors. The problem is that their talents lie not before the camera, but behind musical instruments. As it turns out, they understand that.

The Extras has a happy ending—Ravan and Eddie succeed in the industry, even find love.

Kiran Nagarkar and a happy ending? “The condition of an extra is precarious,” says Nagarkar. “He can’t say, ‘It won’t work out.’ He must say, ‘It will happen tomorrow.’ “Then he goes wide-angle with the kind of statement novelists are supposed to make: “We are all extras, but we are at the centre of our universe.”

A character in Nagarkar’s world becomes successful, which is not to say that he achieves his dreams. “Ravan and Eddie eventually succeed (as R&E, the music-director duo), but they do not get what they wanted.” A character quotes the old song, Jaana thha Japaan pahunch gaye Cheen samajh gaye na. Life, as you’d expect, remains incomprehensible to the characters the more they ponder it.