Blaft from the Past

An independent publishing house based in Chennai has brought the joy back to reading with pure, unadulterated pulp fiction 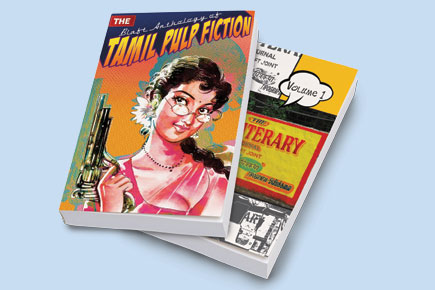 An independent publishing house based in Chennai has brought the joy back to reading with pure, unadulterated pulp fiction


A few weeks ago, at Blossom’s in Bangalore, surely among the finest bookshops anywhere in the world, I found a large stash of Peter Cheyney novels, none of them more than Rs 50—and I bought them in an instant. Peter Cheyney was a hard-drinking, fast-living, police-reporter-turned-novelist who wrote dozens of novels, died at fifty-five, and was subsequently forgotten, despite flickering cult attention across the world. In his lifetime, Cheyney was the poor person’s Patricia Highsmith. He churned out British noir with a distinctly American flavour. His characters were dark, amoral, frequently unfaithful and invariably alcoholic and debt-ridden—and these were just the good guys—and somehow he made all of this seem desirable, magical and glamorous. At his peak, Cheyney was the continental king of pulp fiction. One of his more memorable creations, the FBI agent Lemmy Caution, even became the central protagonist in Jean-Luc Godard’s Alphaville, with Eddie Constantine reprising the role that had made him famous after a string of French B-movies adapted from the books.

I had never heard of Peter Cheyney until Omoseye Bolaji, a remarkable Nigerian novelist who had relocated to South Africa, mentioned him as an influence. I met Bolaji in the course of writing about a wave of self-published literature that was sweeping Bloemfontein, a provincial town just south of Johannesburg. Ntone Edjabe, the editor of a Cape Town-based literary magazine called Chimurenga, had become captivated by the prospect of documenting home-made pulp fiction, and I was assigned to it at his behest. South African publishing tends to be sweetly, dully genteel, and the Bloemfontein scene excited us because it echoed the frenzy of 1960s Nigeria, when pamphlet literature from Onitsha Market was a phenomenon. The funny thing with Edjabe’s own journey into the genre is that it began when he saw a book published right here in Chennai—a book that I was gifting away at a bankrupting rate. Four years after its first print run, The Blaft Anthology of Tamil Pulp Fiction is the little book that could, and its enduring achievement is that it transcended into a sensibility that resonated far beyond Tamil Nadu.

Since that time, and since that book, Blaft has done much more. I particularly liked the giddily gaga work of the charming Kuzhali Manickavel (Insects are Just Like You and Me Except Some of Them Have Wings) and the translated crime fiction of Urdu writer Ibne Safi, ringingly endorsed by our very own Dr Strangelove, AQ Khan, whose blurb alone—the excavation of which qualifies as an act of genius—is worth the price of the book. Browsing the Blaft catalogue is like standing in front of an AH Wheeler bookshop at a railway platform in a mofussil town in north India, nervously eyeing Madhur Kathayen and Mahanagar Kahaniyan and Crime & Detective. It’s the same thrill: it’s so wrong—and so right.

Forty years ago, that selfsame satisfaction was available to English readers pretty much anywhere in India. In the land of the throwaway paperback, publishers like Jaico, Sterling and Orient ruled. A writer like Sasthi Brata could produce a book called Confessions of an Indian Lover, modestly dedicate it to about forty different women (beginning with Angela and Anita and ending with Vimala and Wendy), throw in roughly one explicit intercontinental romp every two pages—and have it sell eighty-five thousand copies in the first year alone. The Tamil writer Ashokamitran could produce a serious, scathing account of life in the fast lane in Kodambakkam, titled Shoot at Site (subtitle: The Lives, Loves and Lusts of Film Stars), and emblazon it with a random naked woman distractedly sucking her thumb on the cover. Sure, for every writer who could actually write—like Sasthi Brata—or actually had something to say—like Ashokamitran—there were fifty more who couldn’t, and didn’t. Fine, put aside the pulchritude, and the cumulative output of fifty years of Indian pulp fiction is mainly crap. But it was better crap; there was pleasure and desire in bookshops, and I can’t remember when I last turned to books published in India for thrills, chills, or, well—how can I put this nicely?—spills.

Naturally, there are exceptions, but so few that they almost seem like accidents. Namita Gokhale’s Paro— the first iteration—got it exactly right, Ginu Kamani’s Junglee Girl was lushly arousing, and Upamanyu Chatterjee, at his worst, is wittier and crazier than anyone else in the room. (At his best, of course, he is Tom Sharpe). I understand perfectly that there may be all kinds of texts being written in Indian languages I do not speak—in fact, I know there are because I see them on footpaths and at bus-stands and railway stations, and I gaze at their lurid packaging, wishing I could read them. I am grateful for the reams of respectable writing that is available to me as a reader, especially the small proportion that is excellent, and I appreciate the fact that a publishing industry that is large in volume—and turnover and profit—can afford to take chances, and occasionally even does. What I don’t understand, however, is why English speakers in the country, from publishers to writers and readers, have outlawed fun.

Then I read Blaft’s latest offering—an anthology of images, comics, art and graphic art—and the fun was back. The Obliterary Journal is either an old-fashioned picture book or a new-wave literary magazine, but who cares, because it hits the ball right out of the stadium. The journal starts off with a hand-painted mural in place of a contents page, with two donkeys tenderly nuzzling each other by the finished product, and leads with a mock-serious manifesto to overthrow the written word, since, as an oppressed squiggle puts it, “Alphabets are stupid! Unless you hand-paint them with a lot of style”. At almost three hundred pages, it’s a thug of a book, filled with whimsy and fantasy and an in-your-face brashness. In short order, there is taxi-art from Paramaribo and auto-art from Bangalore, an uplifting despatch of gayness from the public toilets of Coimbatore, and a tour of hand-painted type from the backlanes of Pondicherry to the walls of the Delhi Jama Masjid. In a fabulous turn, a series of alien-themed palm-leaf drawings done in the traditional Oriya style, supposedly commemorating a little-known extraterrestrial visitation—the ‘Nayagarh Incident’—entered the canon of history after wire services and major newspapers relayed the story with breathless sincerity. The journal closes with a knock-out performance by Orijit Sen, wherein the Emerald Apsara descends on the Heartbreak Hotel and dreamily seduces and spirits away the noted Bengali adventurer (and alleged inventor of the monkey-cap) PR Mazoomder. What Mazoomder learns: “Art saves those it seduces”.

The Obliterary Journal is funky and sexy and kind of awesome. These are difficult times, and literary hippies have been lonely too long. What it boils down to is nothing less than a matter of national honour. We deserve Blaft. So come on people, live a little. Buy the book. Do it for your country.