Vikram Sampath on the challenges of researching a book on 20th century singer Gauhar Jaan. 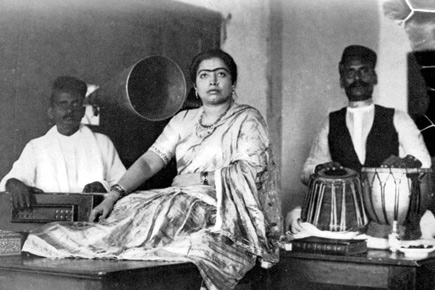 Vikram Sampath on the challenges of researching a book on 20th century singer Gauhar Jaan.


From the music room to the writing desk has been a journey of many strange twists for author Vikram Sampath. His latest work, My Name is Gauhar Jaan, on the legendary 20th century singer, was the outcome of research for his earlier work on the life of the Wodeyar rulers of the erstwhile Mysore state. A serious learner of Carnatic music himself, Sampath’s musical bone was intrigued to learn that the “celebrity who was a rage and whose pictures appeared on postcards and matchboxes manufactured in Austria” had spent the last years of her life in the state where she had been given refuge by her royal patron.

Stepping beyond biographical contextuality, the work also encompasses the early days of gramophone recordings, for Gauhar Jaan was the first Indian voice to be recorded by the Indian agent of the Gramophone Company of India, Fred Gaisberg. Following up this research, Sampath’s book includes a CD of the original recordings digitised from the original 78 rpms. One also admires the manner in which the writer has squirrelled together the original birth certificate, parents’ marriage certificate, details of the Mysore years of the courtesan, and even hospital bills and her death certificate. In the bargain, he also came upon a nearly extinct copy of ghazals written by the artiste’s mother, Badi Malka Jaan.

Speaking on the uphill task of gathering information, especially since most accounts centre on the gossipy angle of such lives, Sampath recounts that it was “the self-effacing world of artistes of those times that ensured that the art was always seen to be bigger than the artiste”, which proved to be the greatest hurdle.

And like the legendary subject, did the author, too, meet with a fair share of ups and downs while writing? “The most depressing reaction of people at large when I told them that I was researching the life of a tawaif was their equating a tawaif with a prostitute! I have tried to recreate the socio-cultural circumstances in which the tawaif reigned in her heydays as the custodian of art. I have also tried to highlight the several customs and evils that existed in the community as also the teaching and learning process, where it was customary for male ustads to exploit their female disciples, and rivalries existed among women musicians of the times; also, there’s an elaborate section on the manner in which tawaifs were hounded and ultimately expunged from society, set in the backdrop of the life of the protagonist.”

Gleaning these facts also solved the common dilemma of every writer: naming the book. This one, too, has a tale to tell. “The earliest recordings of Indian music are distinguished by this high-pitched and flirtatious announcement ( ‘My name is Gauhar Jaan’) made towards the end of the rendition. This declaration seemed to epitomise a milestone in the history of Indian classical music. So I thought it was the most appropriate title for the book. In a way, it is Gauhar telling her own story to her fans,” says Sampath.